I’m writing this on June 1, 2022, while looking out my home office window at Tennessee and Cape May Warblers at my feeder and in the boxelder and spruce trees next to the window. A week ago I had at least 30 or 40 each of these two species in my yard and as many as 10 at a time in the feeder. This morning there are at most 10 or 12 in the yard, and they’re coming to the feeder much more sporadically. It’s pretty cool outside still, but there is much more insect food now that the trees are leafed out. Only a few of these migrating warblers still need supplemental calories on a morning when it’s in the 40s and our furnace is still kicking in. 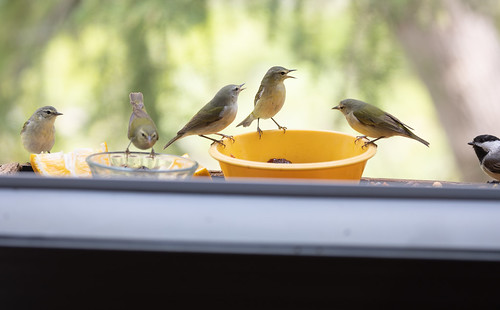 The only time in my life before this spring that either of those species visited my feeders was 18 years ago, during another cold spring—that time it was only Cape Mays, and they were gone before Memorial Day Weekend. 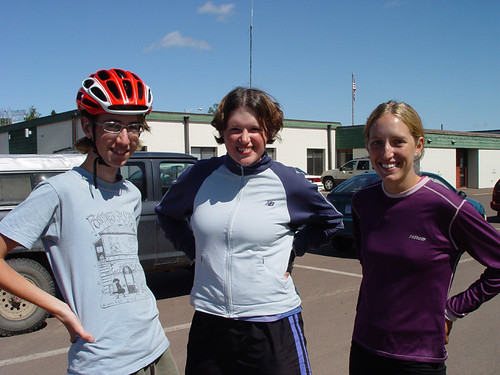 Watching these warblers eat jelly reminds me of my daughter Katherine when she was 19 years old, when she and two young friends rode their bikes around Lake Superior. They brought sleeping bags, tents, a couple of changes of clothing, flashlights, first aid stuff, and essential bike-repair tools, minimizing everything else they had to lug in one Burley trailer and one small one-wheeled trailer. Like migrating warblers, they figured they could find food along the way.

They stopped at grocery stores when passing through cities but got most of their food at gas stations. This worked out well as they worked their way through Wisconsin and Michigan, but as they reached more genuine wilderness in Canada, gas stations became fewer and farther between, and eventually, they got very hungry indeed. When they finally reached one remote gas station, they were so starved and the shelves so poorly stocked that they bought chocolate milk and a box of Betty Crocker chocolate chip cookie mix, glopped it together, and ate it just like that. Not exactly healthy fare, but it gave them the calories they absolutely needed to travel on to where they could find more nutritional fare. 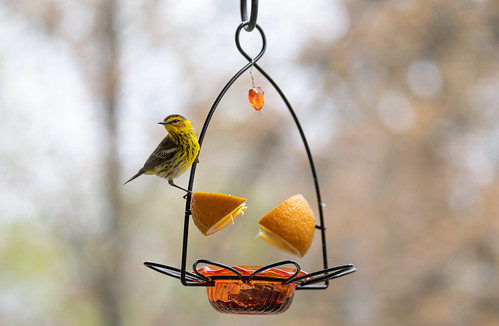 In the exact same way, the grape jelly at my feeder is giving these warblers the calories they need to get through this hard leg of their migration. I’ve seen both species every day for almost two weeks. None of them are banded so I can’t be certain how long individuals stay before moving on—some may have been here the whole time, but it’s equally or more likely that the first to arrive are long gone, replaced by later arrivals. Their numbers peaked on May 27.

Most years migration is pretty much over by the end of May, but over Memorial Day weekend this year, huge numbers of warblers, vireos, and flycatchers were still being seen at Park Point, including one lost little Hooded Warbler on May 30. Every one of the tiny birds was exceptionally active, desperately spending every second searching for insects.

Even though I offer jelly almost every spring for migrating orioles, most years only 3 or 4 show up. This cold year was exceptional—I had as many as 20 orioles in my yard at a time. I hadn’t seen a single Cape May Warbler eating jelly since 2004, and I suspect I won’t see them or Tennessee Warblers again at my feeders until the next exceptionally late spring. In the same way that my daughter and her friends have not once been tempted to glop chocolate milk and cookie dough mix together and eat it raw since that desperate moment on that long-ago bike trip, warblers don’t eat jelly unless they absolutely need it. 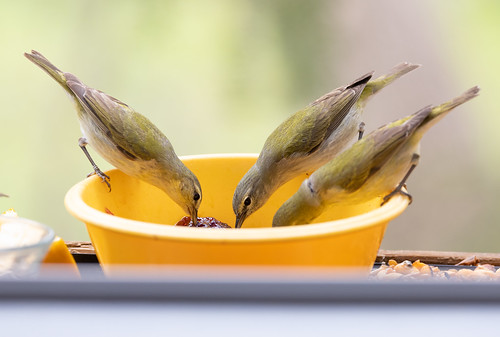 Every one of these tiny birds is an adult who has flown on its own power all the way to the tropics and almost all the way back again at least once, a feat we mere humans can’t even imagine. They know their bodies' needs far better than we do. It's very hard for humans to accept that a half-ounce bird understands a lot that we cannot fathom. 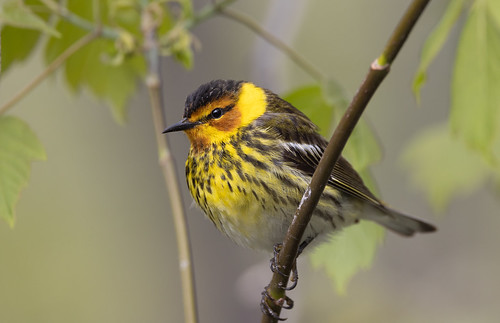 I'm finishing writing this on June 3 at 7:30 am, when the temperature is 47º F. This morning I could find only a single Tennessee Warbler and Cape May in my yard, and they visited my feeders for just a few seconds, not giving me enough time to get a photo. How I'll miss seeing warblers at my feeder! But boy did I feel thrilled and gratified watching these last little birds gleaning insects in my trees, the natural diet they need in order to make that final leg to their boreal forest home at last. 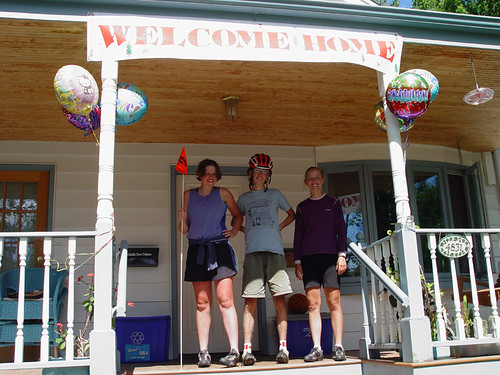