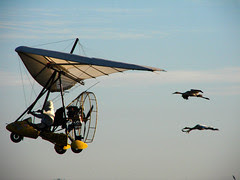 Operation Migration!
Originally uploaded by Laura Erickson
I've been keeping track of this year's Whooping Crane migration every morning on the Operation Migration website. But now that I'm a member, I also get their In Formation magazine. And this issue happens to have an article I wrote, about the differences (including but far beyond identification) between cranes and herons.

When people are in so much trouble economically, it's ever so essential to spend our limited charity dollars most carefully. In the past few years, OM has had increasing difficulties with weather--both during the fall migration when the birds follow the Ultralight and then in the breeding season, when the breeding pairs of these birds have been beset with problems from black flies. As far as I can tell, this ambitious project really is this amazing endangered species' best hope of establishing a wild population outside the Canada/Texas group, which lost a record number of birds this year because of bad conditions on the Aransas National Wildlife Refuge last winter. But Operation Migration is really working--after their first flight behind the Ultralight, these birds make the return journey to Wisconsin and all subsequent migrations entirely on their own, pair up, and breed as if they were wild--exactly the way it was hoped they would. A few "normal" summers again and they should be producing young regularly.

Supporting Operation Migration to ensure there will be enough birds to make a second population sustainable is a really good use of $50. You get In Formation magazine and the satisfaction of knowing you're supporting an extremely worthwhile non-profit organization.

Even if you can't afford a membership right now, check out the Operation Migration Field Journal every day to see where the cranes are and how the migration is going.
Laura Erickson at 6:05 AM
Share