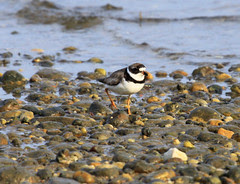 Semipalmated Plover
Originally uploaded by Laura Erickson
The ever-wonderful Bob Russell of the U.S. Fish and Wildlife Service made an important post today to the MOU listserv. He writes:

I recently attended the national shorebird council meeting and Waterbird Society meeting at Cape May, New Jersey. Canadian and American shorebird biologists and land managers attended the meeting. Some findings applicable to Midwestern shorebirders are:

Piping Plover conservation in the Great Lakes is finally paying off as several pairs bred in northern Wisconsin (Apostle Islands) and in Ontario and a pair bred in northern Illinois. Red flags though continue for this population (70+ pairs) with birds lost to botulism and some killed by Merlins which are moving south as a breeding bird in the Sleeping Bear Dunes region of Michigan. Some avian and mammalian predators along the Atlantic coast now are keying in on the cages used to protect the nesting plovers, causing some rethinking on how to avoid attracting predators. Several U of MN folks (current and former students and faculty) are leading the effort in understanding this species in the Northern Great Plains and Great Lakes.

Several papers highlighted Semipalmated Sandpipers (SESA) which have severely decreased in the Bay of Fundy staging area (likely due to a dike across the upper bay that destroyed tidal flow and their chief food source) and northern South American wintering areas with heavy hunting pressure in Guyana and Surinam where the local version of "birding" is to go out with long wires on Sunday and whip them up and down into a flock of shorebirds, killing many in the process. This is not done by impoverished folks for subsistence but by teenagers and families that often arrive at the site in rather well-off SUVs, making a day of it at the beach (mudflat). Several hundred thousand shorebirds may be harvested in this manner. Aerial surveys conducted in Feb, 1982 revealed 1,957,163 shorebirds in coastal northern South America and only 403,959 in Dec, 2008 over the same area. Eastern arctic Semi Sands are longer billed than western arctic birds, substantially so in many cases, and these are the ones showing the greatest population decline. Intense surveys of western arctic Semi Sands (short-billed birds) showed steady or increasing populations. Most Midwestern migrant SESA are of the short-billed populations with
long-billed birds primarily migrating south along the Atlantic coasts.

Several Marbled Godwits (MAGO) that breed on Akimiski Island, James Bay, were fitted with satellite collars and to the surprise of everyone headed southwest (some over Duluth!) and ended up wintering on the Sea of Cortez in Sonora or Baja California, Mexico. MAGOs were also banded last winter in Georgia and most of them flew to the northern Great Plains. I don't believe those results have been published yet so I'll wait on reporting the details.

Researchers at the The Center for Conservation Biology (Virginia) have been banding whimbrels at Virginia coastal staging areas. Many of these birds were recorded flying by Toronto in late May with several flying to breeding areas in the western Hudson Bay lowlands and a couple continuing on NW to the MacKenzie delta. Give pause for reflection on these superb flyers when you see one on the rocks of Grand Marais next May. Several birds returned back to Virginia in the fall, then on to Antilles and northern South America for wintering.

There was also discussion on the effects of climate change upon shorebirds. Many breeding birds in the vicinity of Hudson Bay were thought to have failed due to the cold early summer. No Little Gulls at all were known to have fledged near Churchill. Productivity in other parts of Alaska and the western Arctic was thought to be normal. Some folks noted increased shrub production and areal coverage in the Arctic which might be affecting tundra species like American Golden-plover.