How many birds migrate over the Gulf? 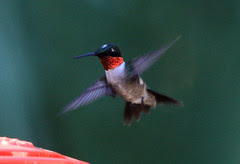 Ruby-throated Hummingbird
Originally uploaded by Laura Erickson
On a May 1, 2000, post on BirdChat, the national birding listserv, gave subscribers a glimpse into just how many birds fly over a Louisiana oil platform. Jay Greenberg forwarded a post from a New York birding listserv by Steve Kelling, who was in turn quoting Brian Sullivan, who was monitoring migrants from an Exxon oil platform for the previous seven weeks as part of an Louisiana State University Gulf migration project. Steve quotes Brian:

I have been having some incredible flights of birds out here lately. Thousands of migrants over the past four days, including just over 4,000 birds on the 24th. My constant companions over the last three days have been Scissor-tailed Flycatchers, which have been hunting moths from the handrails not more than 10 feet away from me all day. On the 24th, a female Rose-breasted Grosbeak landed on the arm of my chair, in which I was sitting at the time. The flight on the 24th was truly one of the most amazing migration spectacles I have ever witnessed. Imagine, over 4,000 passerines passed this one point, just a random spot in the middle of the Gulf. To think of the total number of birds on the move that day is mind boggling.

The day started with strong SSW winds at 30 mph, changing over to WNW with the passage of a strong cold front around 11 AM. The first high-altitude migrants could be seen as early as 8:30 AM, much earlier than they typically arrive at Green Canyon, meaning they covered roughly 400 miles possibly in less than 12 hours. It seems that even with the best of tailwinds, they typically don't show up until after 15 hours of flight, however the winds aloft this day were exceptional.

When the front hit, which contained no precipitation, the migrants immediately lost altitude, flying anywhere from just over the surface of the water to a height of several hundred meters. The majority, however, were at eye level. It was amazing to watch mixed flocks of warblers, tanangers, orioles, grosbeaks and buntings as they all hurtled north together. Most of the birds went unidentified, but late in the afternoon as the sun got lower and the light improved I was able to identify 66 species of migrants, by far the best diversity here at Green Canyon this year. I would stand there facing south and find a flock with the binoculars, then scope them only to see dozens more specks in the distance. I would often hear the close approaching flocks before seeing them, as they would fly straight into the platform then disperse off in every direction as they were buffeted by the 30 mph winds on each side. I would just look up and without warning there would be 50 warblers shooting off in all directions. It was maddening trying to make identifications. I felt useless as flocks of birds would go by and I could not identify more than 5 or 10, if I was lucky.

Warbler ID in flight is an art, and I could have used some of the pros out here with me that day. Highlights were, Golden-winged Warbler, Canada Warbler, Mourning Warbler, Scissor-tailed Flycatcher, Loggerhead Shrike, and Cape May Warbler. One of the most interesting features of the day was a high-elevatioin flight of Gray Catbirds and Catharus thrushes. These birds were traveling at altitudes of what we call code 3, or only visible with binoculars. I found it interesting that the Catharus thrushes were in tight coherent flocks, not unlike migrating American Robins, a behavior unknown to me. The catbirds, or the other hand, seemed to go out of their way to avoid flocking and flocks of other passerines passing by. Panning my scope up to look at these birds would reveal Gray Catbird after Gray Catbird, just plodding their way north way the hell up there, with a good number of cuckoos thrown in for good measure, as well as the odd shorebird flock. The big warbler species were Magnolia and Tennessee, with over twenty other species thrown in. Indigo Buntings and Baltimore Orioles were also in huge numbers.

That evening, and night, many tired migrants started to fall out on deck. I had many birds spend the night in the rafters under the helipad with a good changeover continuing throughout the night. By morning, most had departed, but another nice wave of tired migrants continued to travel north throughout the day.

That evening I had many birds on board, including a handsome Purple Gallinule, and a gorgeous male Cerulean Warbler, which let me get within 2 feet before hopping away, yes hopping. It’s amazing how oblivious these birds can be to my presence. The other day I watched a Purple Gallinule trying to get a drink out of the deck drain, and I sat down right next to it. It looked at me briefly, then went back to what it was doing. I was close enough to reach out and touch the bird, and having never handled a Purple Gallinule before, that's what I did, and it didn't care one bit. I could study every single feather tract of the Scissor-tailed Flycatchers, but they didn't let me touch them. I tried. I also had a very tame Acadian Flycatcher which perched on my boot briefly while my feet were up on the handrail.

For those of you who have birded the Chesapeake Bay Bridge Tunnel, the experience out here is similar, only to a larger degree. Tired birds, good looks, and a lot of days with nothing to look at but the water. The sea has been very quiet lately. The Laughing Gulls have moved on, as well as the Pomarine Jaegers, which seem to have vanished altogether without so much as a good bye. I think I may have barely eeked out 1000 for the season, a great number for a species I was happy to become more familiar with.

Raptors have been limited to Peregrines and Merlins, which have been seen on a daily basis lately. I saw a female tundrius Peregrine catch a Purple Gallinule the other day, then proceed to carry it up on to the flare boom and devour the poor bastard. I didn't feel that bad though, natural selection hurts, and I was actually happy to have found the leg later.