How long should a drilling moratorium go on? 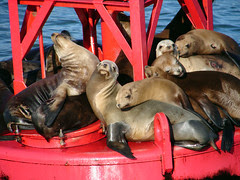 California Sea Lions
Originally uploaded by Laura Erickson
A judge who happens to own stock in a lot of oil industry companies ruled yesterday that the Obama administration's 6-month moratorium on oil drilling in the Gulf was arbitrary and unfair, punishing "innocent" companies. But apparently most or all of those companies in the Gulf of Mexico have emergency response plans that are virtually identical to BP's, including protecting walruses and sea lions and listing a dead man as their expert consultant for wildlife.

Halliburton claims that they warned BP that shortcuts weren't wise, but the fact that they still went along with BP's plans makes them complicit, and offers absolutely no reassurance that other wells they've worked on aren't equally compromised. Transocean also went along with BP's plans, making them complicit, too. This is a case of murder, and these companies (which the Supreme Court says deserve the same consideration as human beings) are accomplices.

These companies all worked with Dick Cheney in secret meetings; they all have to remain suspect until, one by one, they re-evaluate each and every one of their wells in the Gulf using real-world standards, and develop real-world technologies that can stop these horrific "accidents" or at least fix them when they do occur. And the proof is in the pudding. If they really can stop one of these disasters, let them prove it today, right there at the Deepwater Horizon well.
Laura Erickson at 8:47 AM
Share