Loons wintering in the Gulf 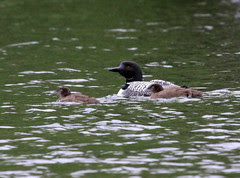 My Texas friend Ruskin Teeter sent me a message yesterday, quoting a friend in Ft. Walton Beach, Florida, who emailed him after the oil hit:

"Well, (no pun intended) the oil is here. I am sick about it. I have been crying for about an hour now. Life in this area is changed forever. Hurricanes can be overcome. This is just too much. I am so glad that Mom passed 2 years ago because this would have killed her. Say your prayers for us, the gulf, the beaches, and the wildlife. This is devastating. Nothing you see on the TV can prepare you for this mess.

And nothing on the news—on television, the internet, the radio, or magazines and newspapers—can possibly prepare our loons for what they’ll experience after their long fall migration when they finally reach those familiar waters where they spent the first couple of years of their life. The moment they dive in, it will be too late.
Many of the books and papers I’ve read over the years said that loons from the Great Lakes region migrate east, to the Atlantic coast, and wend their way south along the coast through the winter. But more current research, based on extensive banding efforts by researchers at the BioDiversity Research Institute in Maine, the Wisconsin Department of Natural Resources, and George Mason University in California, as well as tracking via satellite transmitters, has brought a lot more precision to what we know. According to the Common Loon account in the Birds of North America Online, published by the Cornell Lab of Ornithology and the American Ornithologists’ Union and updated just last month:

The loon populations of the Upper Great Lakes in Michigan and Wisconsin migrate along the southern Great Lakes and use an overland migration route to the Gulf of Mexico (Alabama east along the Florida coast) and e. Florida. Some individuals stage on lakes along the way and even over-winter in larger reservoirs in Tennessee and Alabama. Minnesota and Wisconsin breeding populations have two migration routes, and both generally use the Great Lakes as staging areas. The primary route includes the Gulf of Mexico from Mississippi west to Texas, and the second documented route uses the southern Great Lakes to make an easterly migration to the mid-Atlantic.

This means that the bulk of the loons nesting in our listening area will be headed to the Gulf within the next three months—quite likely while new oil is still gushing into what is already a disaster area. I’m not sure if there is any natural way some loons will figure out the danger in time to avoid being oiled, and the scale of this disaster and the number of species it’s affecting and will affect is too enormous for anyone to wrap their heads around, much less develop any kind of realistic action plan focused on just one species of so many.
Young loons remain in salt water for usually a couple of years, which means loons that hatched in 2008 and 2009 are on the Gulf and the Atlantic coasts right now. They tend to stay pretty far away from shore in summer, so aren’t easy to census, and will be easily overlooked if they sink or get wrapped in gunk. We’ll never be able to assess how many were lost, but we can count on smaller loon numbers for many years to come.

Last week I photographed a pair of loons and their two chicks on a lake near Boulder Dam, Wisconsin. I watched one of the adults waggling its foot and a chick imitating it—a charming thing that would have filled me with delight most years. But I kept wondering what this little family would be facing in a matter of weeks, and felt sick to my stomach. This disaster is bigger than any of us have been able to even imagine, and the oil is still gushing.
Laura Erickson at 9:48 AM
Share