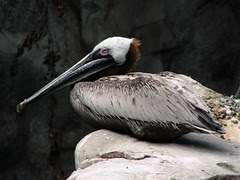 Brown Pelican
Originally uploaded by Laura Erickson
(Transcript of "For the Birds" for June 14, 2010)

I’m writing this on June 13, 2010, Day 54 of the Gulf Disaster. One of my Texas friends, Ruskin Teeter, just posted a message on Facebook: “Driving west from northwestern Florida today, through Alabama, Mississippi, and Louisiana, the spill smells were bad, beginning at about Pensacola, and they became much worse crossing Mobile Bay. My eyes burned, my nose ran, and I coughed until turning north and getting half-way across the Atchafalaya Basin. No way this could be healthy.”
Ruskin’s exactly right that there is no way this can be healthy, for humans or for birds, which have such a high metabolism that they absorb and react to toxins much more quickly than we do. The expression “canaries in a coal mine” comes from the real world.
The Gulf crisis is the largest environmental catastrophe this nation has ever faced, and every day the situation grows ever more desperate. In the face of the millions upon millions of gallons of oil spreading to cover ever more of the vast Gulf and its rich coastline, critics have been saying that rehabbing pelicans is an inappropriate use of resources—too small percentage of birds rehabbed from oil spills actually recover, and many of these individuals will head right back to where they were oiled because of their exquisite homing instincts. And hurricanes and ocean currents will spread oil so far that species with limited ranges won’t have any place to go anyway. These critics would rather see our limited resources focused on populations and habitats and on ensuring that such a disaster can never happen again.
I understand the enormity of this disaster. Fears that the Gulf will soon be so toxic that nothing will be able to live in its water for decades may not be the least bit overblown. But despair is not the answer. Before we were even a nation, we Americans worked together in a concerted effort to defeat the most powerful empire on earth to win our independence. Remembering that the only thing we had to fear was fear itself, we made enormous personal and collective sacrifices and survived the Great Depression, destroyed Nazism, and defeated the nation that had attacked Pearl Harbor. When we set our collective minds and hearts to it, we traveled to the moon, walked upon its surface, and even hit a couple of golf balls up there. And we brought back Lake Erie from the dead.
Now we must save the Gulf of Mexico. Failure is not an option. We won World War II not by sending our boys off and forgetting about them the way we’ve been doing to our soldiers in Iraq and Afghanistan. We won World War II by focus and collective sacrifice—rationing and scarcity were the order of the day, and any American who griped about it would have been shunned. This level of sacrifice and more will be necessary to defeat this horrifying attack right here in American waters and now creeping insidiously onto our shorelines and precious estuaries and marshes, poisoning our nation’s very soul.
As we fight this enormous ecological threat, the one thing we must not sacrifice is our essential humanity. Hope is the thing with feathers that perches in the soul—to turn away from suffering creatures because it’s not expeditious is the mindset of a greedy, cost-cutting corporation, not a human being. To deny help to these oiled birds would diminish us all. To passively allow the light in a pelican’s eyes to be extinguished when a person has the expertise and passion to help it goes against the grain of our very humanity. And without that, we ourselves are not worth saving.
Laura Erickson at 5:31 AM
Share