The worst is over? 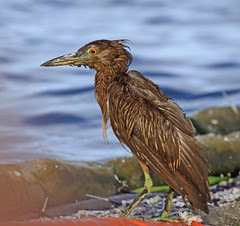 Oiled Heron
Originally uploaded by Laura Erickson
We don't even know what the worst is yet. People are still not getting onto Raccoon Island, and this poor bird was on a boom off the very-oiled Cat Island, a major pelican breeding spot, just yesterday. Oil on the surface is very hard to see now, and is indeed evaporating and disappearing--really, sneaking into our atmosphere, but it will eventually go away and in most places, including where I took this photo, I couldn't smell it. But we have no idea how much oil remains beneath the surface, to pop up unexpectedly here and there. And we have no idea how much oxygen is being depleted under water where bacteria are gobbling it up.

And we also have no idea how many birds like this are suffering and dying on the island, out of sight of people in boats.
Laura Erickson at 4:15 PM
Share