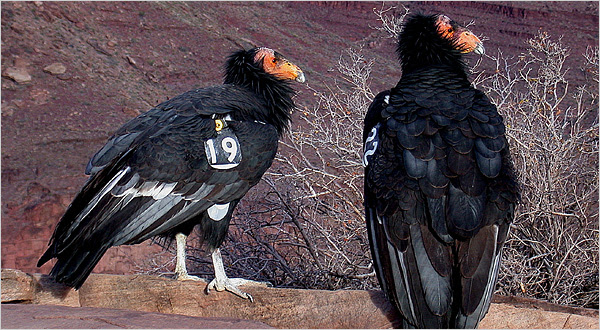 When I started producing “For the Birds” in May 1986, California Condors were on the brink of extinction, with fewer than two dozen still in existence on the planet, and scientists and wildlife managers, working under authority of the Endangered Species Act, were working tirelessly to save them. It had already been five years since the last condor chick had fledged in 1981. So the US Fish and Wildlife Service approved a plan to capture every last one of them from the wild and start a captive breeding program. The last wild condor was caught on Easter Sunday in 1987. All 22 still in existence were in captivity.

Condors don’t start reproducing until they’re six years old, and females lay just one egg every two years. The birds captured in the wild had both to be restored to good health and to adjust to captive conditions in order to breed at all. Many people, including me, thought the captive breeding program was doomed from the start, but the hard work of the San Diego Wild Animal Park and the Los Angeles Zoo finally paid off. Condors have been being released in California since 1991, and in the Grand Canyon area of Arizona since 1996. Lead continues to be a serious danger for them in California, so in 2008, the Ridley-Tree Condor Preservation Act went into effect, requiring hunters within the condor’s range in California to use non-lead bullets.

People were more hopeful about condors along the California coast. These birds feed mostly on carcasses of marine mammals that wash ashore, so scientists expected these condors to recover more quickly than the inland birds. But although the adult birds appear to be doing well, when they nest, their eggs have exceptionally thin shells, exactly like eggs of eagles and other fish-eating birds when DDT was abundant in the environment. Condor eggs in inland areas have normal shells. The Ventana Wildlife Society discovered a large DDT hot spot in sediments off the Southern California coast, near a breeding ground for California sea lions. The DDT polluting this area originated with the Montrose Chemical Corporation, which 50 years ago was the world’s largest producer of DDT. During the 1950s and ’60s, Montrose discharged its untreated DDT waste directly into the Los Angeles County Sanitation District’s sewer system. An estimated 1,700 tons of DDT settled onto the seabed, where it continues to contaminate Pacific Coast waters. The E.P.A. has declared the area a Superfund site and developed a plan to cover the most contaminated parts with a cap of sand and silt in 2012.

In recent years, a large number of scientifically challenged politicians and corporate mouthpieces have been whining about the banning of DDT so long ago. People who have analyzed blood samples stored in medical research facilities during the 50s and 60s recently learned that DDT levels in the blood of pregnant women were directly correlated with premature births and miscarriages. And even back in the 60s, scientists were discovering DDT passing through to babies through both cows and mother’s milk. Almost 40 years after this dangerous pesticide was banned, it’s still in the environment, still causing egregious harm to wildlife and possibly to humans eating coastal fish. When I started producing For the Birds in 1986, I thought that within a decade or so, DDT would be nothing more than a distant memory and we’d stay on top of other environmental assaults. I was wrong in my pessimism about the condor reintroduction project, but I was also wrong in my optimism about sensible environmental legislation. I guess some people will still be lusting for a quick buck at the expense of wildlife and other human beings long after condors have disappeared into the mists of time.
Laura Erickson at 8:35 AM
Share