For the Birds Retrospective Part I

Today I start a 25-week countdown until May 12, 2012, the 25th anniversary of the first “For the Birds” program. Over the past quarter century, For the Birds has had quite a few brushes with great people. In 1986, Garry Trudeau killed off Doonesbury’s one bird-watching character, Richard Davenport, husband of Lacey Davenport. Dick was in Yosemite when he saw a Bachman’s Warbler—a bird so rare that most ornithologists believe it’s been extinct since the 1960s or so. The Doonesbury character was photographing his thrilling sighting when he suffered a heart attack and died on the spot. His last word as he clicked the camera shutter was “immortality.”

I wrote to Garry Trudeau a few weeks later to ask when Lacey was going to take the film out of his camera and get it developed—even a cartoon photo of a possibly extinct bird would be a cool thing. I also asked him for an interview. I got a nice letter back, but Mr. Trudeau didn’t have time for an interview. None of his cartoon strip characters ever did get that film developed, and I hardly ever talk to anyone who even remembers Richard Davenport, so the character’s dying wish for immortality turned out to be sad and ironic. See the "Dick Davenport, R.I.P."  entire series here.

I wrote to Charles Schulz in the late 80s, asking what species Woodstock was. In one series of strips, Snoopy and Woodstock were leafing through a field guide trying to figure it out—I just remember the one where they were guessing he was a Ruby-crowned Kinglet. Schulz said he never settled on a particular species for Woodstock, but reminded me that when the little yellow bird was first introduced, she was a female serving as Snoopy’s secretary. I found this cosmically depressing—that in order for the poor bird to rise from being Snoopy’s secretary to being his friend, she had to disappear from the strip for a while and, hidden from view, undergo a sex-change operation. 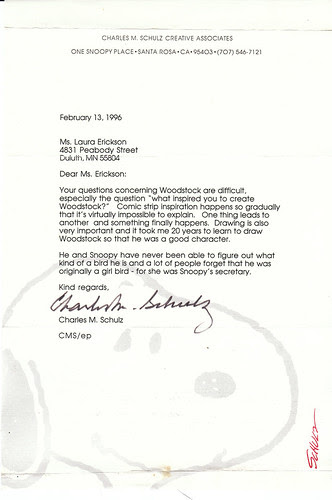 During the 1980s, Duluth’s Ring-billed Gull population exploded. Suddenly they were everywhere, and people started panicking. One Duluth city councilor even proposed (and I am not making this up) introducing wild pigs to the Duluth harbor to control the gulls by eating their eggs—too bad Alfred Hitchcock hadn’t made a movie about a town being terrorized by wild pigs, a much more plausible menace than birds. Anyway, I wrote to Roger Tory Peterson to ask about his world experiences with birds that had adapted to the urban environment and mooched for food from people. He sent back a charming letter telling me how easy it is to get Ring-billed Gulls and Laughing Gulls to eat from your hand, but that he’d also coaxed one Herring Gull to take food from his hand. He also mentioned a Brown Pelican in Venice, Florida, that would saunter into a bait shop and demand fish. 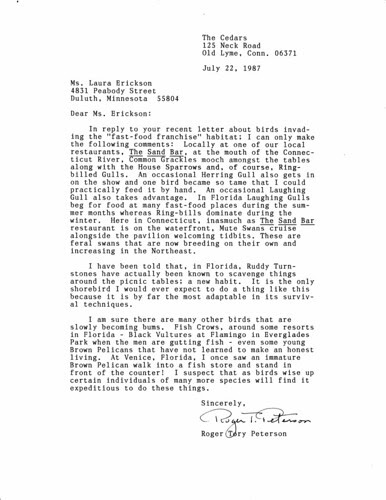 For the Birds has had a long-term relationship with humor writer Dave Barry. Next week I’ll tell the story of how I became known as his tapeworm advisor.
Laura Erickson at 8:55 AM
Share