Another Dave Barry story, about tapeworms. 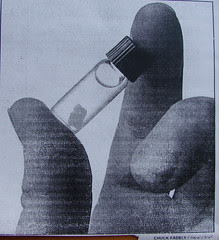 "Roger," the nighthawk tapeworm I sent to Dave Barry
Originally uploaded by Laura Erickson
During my 25-week countdown to the 25th anniversary of For the Birds, I’m reminiscing. Last time I talked about writing to humor writer Dave Barry after a Barred Owl dropped down someone’s chimney and caused a lot of damage that was not covered by the people’s homeowner’s insurance policy. That happened sometime in the late 1980s, and the postcard I got back from Dave Barry was one of my most prized possessions.
Then, in 1993 my first book, “For the Birds,” came out. The publisher, Pfeifer-Hamilton, was extremely good at marketing, and though marketing is not part of my own skill set, I was pretty cooperative, and quite a few top ornithologists wrote really nice blurbs for it. But Pfeifer-Hamilton’s marketing department wanted someone famous outside the birding world, not Chandler Robbins, Frank Gill, or Joe Grzybowski. They kept pressing me, insisting that I must know someone famous, and finally I blurted out that I’d once gotten a postcard from Dave Barry. They seized on that, and were going to ask him for a blurb for my book as one of my quote “correspondents.” I already knew that he had a policy of not writing blurbs for books, much less bird books, so I told them I’d write to him myself. The whole thing felt awkward and weird, but I finally composed a letter explaining what had happened and how I knew he didn’t write blurbs and asked him to just donate the book to his son’s school library. I thought that would be the end of it.
But less than a week later, what should appear in my mailbox but a blurb about my book, from Dave Barry! He wrote, “This book is invaluable. For example, it states that as many as 1,600 tapeworms have been found in a single duck. This is the kind of information I use every day.—Dave Barry.” 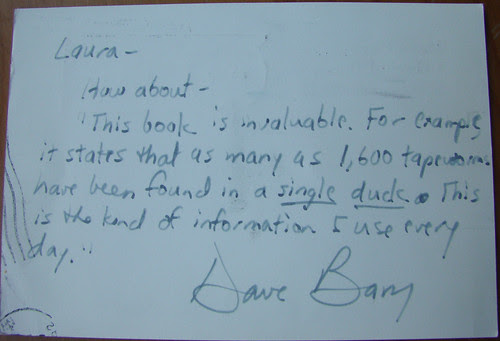 My publishers were elated, and I was in heaven. I needed to think about some way to thank him—something more than just a simple letter seemed in order. I was rehabbing birds at the time, and just happened to have a nighthawk who had tapeworms, so I cleaned one off, put it in a tiny vial of alcohol, placed it in a velvet jewelry box, and sent it to him. He quickly sent me back another postcard saying, “Thanks. It was delicious. —Dave ‘Nighthawk’ Barry.” 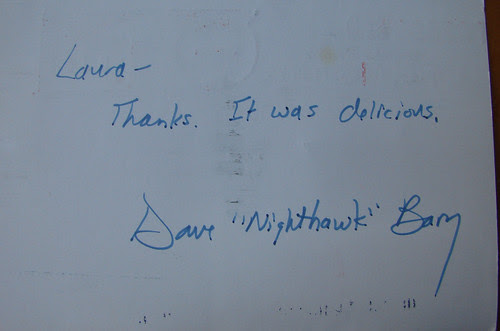 I was thrilled beyond measure.
Not long after that, my publishers called and asked me to go to the ABA convention in Los Angeles. This was thrilling—I felt like a jet-setting author—and even after I discovered that for them, ABA did not stand for American Birding Association but, rather, the American Booksellers Association, it was still exciting. All the authors were expected to do book signings. Dave Barry was so popular that they gave out tickets for his, setting the limit at 500 people. The first thing I did the moment I registered was to get one of those tickets.
The line at my own book signing never had more than 10 people, but Dave Barry’s stretched down the hall almost to the doors of the convention center. It moved fast. He just signed a book and handed it to the next person in a robotic rhythm. My heart was beating fast when I got to the head of the line. I’d wanted to say something pithy when it was my turn, but he was too busy for that, so I just smiled at him. But as he handed me the book, he noticed my nametag and stood up saying, “You’re the lady who sent me the tapeworm!” Of course, the next moment he was back in his chair signing “Dave Barry” and handing the next person a book, but to have one moment of recognition by Dave Barry was one of the coolest things that had ever happened to me. And the best tapeworm story was yet to come.
Laura Erickson at 7:43 AM
Share