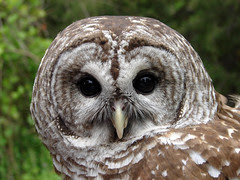 Barred Owl
Originally uploaded by Laura Erickson
In another program recounting 25 years of "For the Birds," I talked about my first encounter with humor writer Dave Barry today on For the Birds. Here's the script:

In the late 1980s, I got a call from friends of mine who lived north of Duluth in a big house in the woods. The biggest room was built as a sort of dormitory for a logging crew, and was prohibitively expensive to heat, so they’d close it off for most of the winter. That winter they started noticing that their two dogs were spending a lot of time at the door of the closed off room, so they finally went into it to investigate, and what to their wondering eyes should appear but a Barred Owl who had dropped down the chimney and been trapped in the room for apparently several days, pooping all over their walls, furniture, and rugs. The bird had perched atop several of their expensive art prints, leaving long streaks of slimy, acidic whitewash along the frames and glass, ruining the finish on the frames and in a couple of cases seeping between the frame and glass, wicking up onto the matting and actual prints. The bird had knocked expensive bric-a-brac off their fireplace mantel and shelves, messed all over their sofa and chairs, and even slashed through some of the upholstery with its talons. All in all, it had done an impressive amount of damage for a bird that weighs barely 2 pounds.
My friends, being civilized people not bent on revenge, captured the bird and safely released it outdoors, and then attended to the mess. They got estimates from professional cleaners for things they didn’t know how to begin to deal with, searched out their receipts for items damaged beyond repair, and brought all the documentation of their losses to their insurance agent. That’s when they got an even more distressing surprise—he told them that their homeowner’s policy doesn’t cover wildlife damage.
I looked at our own policy and, sure enough, wildlife damage is indeed excluded. So I called a few insurance salesmen asking about this, and they confirmed that standard homeowner’s policies do indeed exclude wildlife damage. I asked about the cases, particularly common in the 1800s before good building codes, when House Sparrows often picked up smoldering cigarette and cigar butts to incorporate into their nests, setting houses afire. The agents assured me that fire damage is always covered. Then I asked about a situation that happens fairly frequently up here, when Ruffed Grouse collide with a window, breaking the glass and sometimes causing damage indoors. Nope, that’s not covered by standard policies unless glass breakage is specifically added. I asked what happens when a kid throws a rock into a window, causing almost identical damage. That is covered, as vandalism. So what would happen, I asked, if a kid threw a Ruffed Grouse through the window? Every one of the agents laughed at the question, but none knew the answer, so they referred me to a couple of insurance adjustors. I asked them the same series of questions, and neither of them laughed—they both instantly asked, “Why do you want to know?”
So I wrote to Dave Barry, the Pulitzer Prize-winning humor writer, asking him to investigate the situation. He sent me back a postcard saying that his question was, “Is it covered if you shoot an insurance adjustor and he bleeds on your furniture?”
That postcard started a fairly long and always funny correspondence with Dave Barry; even now the National Outdoor Book Award website calls me “Dave Barry’s tapeworm advisor.” Next time I’ll share more stories about how that came about.
Laura Erickson at 7:27 AM
Share