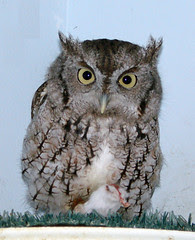 In April, 2000, I was keynote speaker at a birding festival in Ohio, talking about owls. After my talk, a woman plied me with questions about my experiences handling owls as a rehabber, and how my understanding of their wild behaviors affected how I managed their care. During the course of our conversation, I mentioned that I had permits to keep an education owl, but hadn’t yet found an unreleasable bird. And at that moment, her face lit up, because she had an Eastern Screech-Owl that she’d had for almost a full year. He’d been sick and almost died as a very young chick, and his care required so much handling that he’d become imprinted. All the educational facilities in the area had their limit of birds, so she was thrilled that I could take him. Of course, I needed my state and federal permits in order to fly home with him, so I called Russ and asked him to fax them to me. Unfortunately for him, I keep the files in my four huge file drawers organized in taxonomic order, not alphabetically, but he assured me it didn’t take him too long. I had to arrange with the airline to fly with a bird and had to pay an extra $75 for the one-way flight, though he was in a little cardboard box the size a pet store puts a guinea pig in.

Archimedes has been a wonderful companion for almost 11 years. Every winter he starts calling, and we get into fun back-and-forth conversations. But during this time, it never once occurred to me to record his voice. Then on January 11, for some reason I had a flash of inspiration and brought up a microphone to try. I started with the microphone that I use for recording this radio program, and he called several times, but the mic just wasn’t sensitive enough to pick up his voice, though he was pretty close to it. So then I tried my Sennheiser directional mic. What you’re hearing in the background of this program is the recording I made of his voice.

During the year that he was kept at the Ohio rehab center, Archimedes heard quite a few Eastern Screech-Owls. Duluth is north of their typical range. I heard a wild one once in my neighborhood, but that was exceptional. So for the past 11 years, Archimedes has heard his own species calling very rarely if at all. He calls most intensely in late fall and again in early spring—this year I’ll try to get recordings when he’s making the trill call, and when he’s making longer whinnies. Here he’s making just a soft, short whinny.

For the first 45 or so years of my life, I never imagined living with an owl. There is definitely a dark side to it—sometimes I get very sad defrosting mice every night. I order them from a place in Louisiana. It was tricky finding a good dealer. First I tried a place that sells mice raised for medical research, figuring they’d at least died for a good cause. But they smelled after being defrosted, because they’d already been dissected at room temperature, and I also started thinking about the pharmaceuticals they’d been exposed to for research, and decided it was just too chancy. Many of the mice from my second supplier bore scratches and wounds that meant they’d been overcrowded and must have led sad existences. Now the mice I get look fit and healthy except for being dead. They’re killed with carbon dioxide and sent frozen in dry ice. I always feel sad at dinner time, and suspect that I’ll never want to deal with them again when Archimedes is gone.

The other dark side to living with an owl is keeping his room clean. I won’t get into details, but suffice it to say it’s not pleasant. But Archimedes has been an exceptional companion. As his 12th birthday approaches, I’m hoping he’ll set new longevity records for screech owls. He’s a treasure, and I feel lucky beyond measure to have been able to spend so much time in his company.
Laura Erickson at 9:00 AM
Share