Visit to the Sharp-tailed Grouse blind 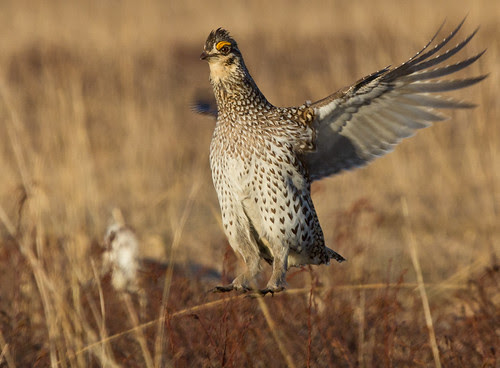 (Transcript of today's For the Birds program)

This week I went to the Sharp-tailed Grouse blind south of Solon Springs managed by the Friends of the Bird Sanctuary organization. It’s been four years since I’ve been there—I had to miss during the three years I was in Ithaca—and it was splendid seeing these exuberant birds with their testosterone-fueled displays again. There were over 25, more than I’d ever seen there before.

It’s still early enough in the spring season this year that the landscape appeared fairly barren—new green growth wasn’t yet evident, so the dominant color of the landscape was brown, making the orange and purplish-pink air sacs of the grouse stand out brilliantly. But those sacs are often deflated—the things that stand out in the brown grassland are the birds’ big white undertail coverts, standing out like oversized diamonds. Even during twilight we could see as many as nine of these big white fluffy flags at once.

I arrived later than I wanted this time, getting there at 5:30. I park on the road and walked the half mile or so to the blind, joyfully listening to the pitter patter of their dancing feet, with that weird lawnmower-like sound, and the sounds of the various gabbling calls they were making. I crept in slowly and quietly, but my shape was unmistakable in the twilight, and suddenly the birds flushed in a thundering roar. I felt bad about disturbing them, but got settled into the blind knowing they’d be back.

Sharp-tails are large, tasty birds without a lot of defenses. They must be eternally vigilant or become dinner for predators. I was judged to be a stealthy stalker who suddenly vanished from sight into the blind. Birds at ground level can’t see ground predators at any distance, and so the grouse couldn’t trust their eyes to be certain that I was really gone. But they have other ways of knowing where predators might be. Vesper Sparrows, each with a small territory throughout the entire lekking area, make excellent sentinels for prairie grouse—each one shuts up when disturbed, and only resumes singing when the coast is clear. These little sparrows perch atop weeds or shrubs, giving each one a broader view than the grouse get from their more limited vantage points on the ground. Sure enough, one by one the little sentinels resumed singing, and when Vesper Sparrows were singing from all directions around the display area, the grouse returned.

At 6:23, a Northern Harrier flew over the display area, and again the grouse flushed and disappeared in a thundering roar. Aerial predators are far easier for them to keep track of, and once the harrier moved on, the grouse instantly returned.

One of the grouse appeared to be lame, unable to properly stomp his feet in the enthusiastic dance that sets female grouse’s hearts aflutter. He still faced off against other males, still inflated his neck and eyebrow air sacs, and still lifted his white, fluffy tail, but this year would probably not win the hearts of any females, who consider only the most perfect, capable males as potential fathers for their children. That means most males never get to mate. They don’t seem to mind—it seems like the display and dance gives them all a lot of satisfaction whether or not they actually win the competition. Grouse seldom survive long with an injury, but I’m glad that whatever hurt this one, it still managed to partake in this spring ritual. I don’t know if heaven exists for Sharp-tailed Grouse, but if it does, I bet it’s a perfect and eternal lekking ground on a sunny April morning, filled with the exuberant sights and sounds of dancing grouse and their helpful little Vesper Sparrow buddies. Really, that could be heaven for a lot of us.
Laura Erickson at 8:43 AM
Share