A wrinkle in the space-time continuum 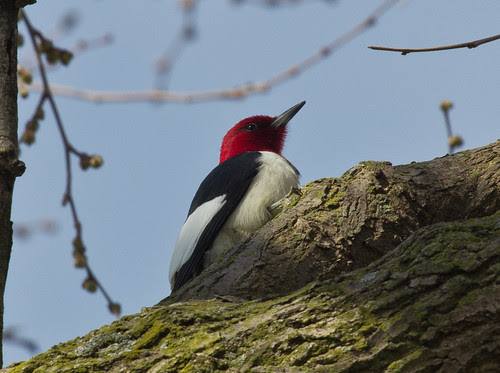 I woke up on May 1, 2011, in Chicago, where Russ and I had gone to attend our niece’s wedding. Before we drove back to Duluth, we decided to visit Harold Washington Park in the Hyde Park neighborhood in hopes of seeing Chicago’s Monk Parakeets—now that I have a really good camera, I was hoping for some really good photos, and the morning was so sunny and bright that they’d have turned out great. But the parrots don’t start nesting this early in the year, and so were somewhere else. I’ve seen them in winter near the Museum of Science and Industry, so we drove over there, too, but again no luck. Monk Parakeets are so very noisy that we’d have heard them if they were around.

Despite not being able to see the birds we’d driven all the way to the south side to see, it was a great morning. May first is always an auspicious day, filled with the promise of warblers and other migrants, and in Chicago, four hundred miles south of Duluth, this promise was warmly fulfilled. The temperature was already reaching 60, the sky was clear, and the trees were filled with opening buds or tiny leaves and plenty of warblers. Most, as expected, were Yellow-rumps, but several Yellow Warblers were in full song, and we also saw Palm and Black-and-white Warblers and a Common Yellowthroat. I got great photos of a Warbling Vireo, and a Blue-gray Gnatcatcher kept calling.

The last time Russ and I visited Millennium Park on a May morning, there were a few Red-headed Woodpeckers. I was thinking they were caught in a migrant trap along Lake Michigan, but on Sunday I saw several along the lake by the museum, and started wondering if the Chicago Lakefront doesn’t have its very own population of these splendid birds. They were calling, flying back and forth with those spectacular white wing patches glistening in the morning sun, and alighting in trees higher up than I wanted but still close enough for some pretty photographs. I saw Red-headed Woodpeckers a lot back in the 1970s when I started birding, but this species is declining over much of its former range. It’s particularly vulnerable to automobile collisions and to nest losses due to European Starlings, so it’s doubly unexpected to find a whole group of them in an area with so very many starlings and heavy traffic. But if I were to miss seeing Monk Parakeets, a group of Red-headed Woodpeckers more than made up for it.

We finally said goodbye to the woodpeckers and warblers and headed north. The wind was picking up, and by the time we made it to Goose Pond in Columbia County, where I always stop when driving this route, the wind from the northwest was fierce. Goose Pond isn’t all that big, but the water was choppy and the waterfowl few. Not only was the wind picking up, but the temperature was dropping back into the 40s By the time we reached Eau Claire, it was back down to the 30s and the landscape was brown and wintry again. They say all good things come to an end, but somehow I wasn’t expecting an entire month to disappear before it even got started. For the first time in my life, I was witnessing a wrinkle in the space-time continuum. We left Chicago on May first, but we got home to Duluth in mid-March.
Laura Erickson at 12:49 PM
Share