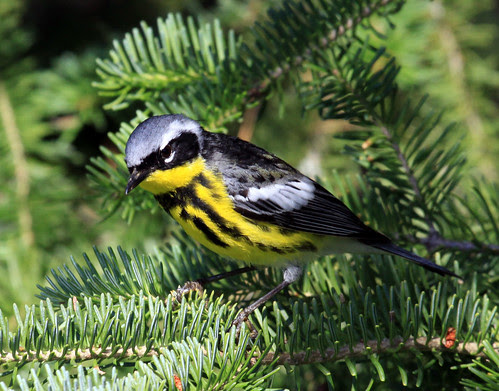 (Transcript of today's For the Birds)
Today, May 11, 2011, is the 36th anniversary of the day I saw my first warblers. On May 11, 1975, when I was birding in the Red Cedar Woodlot at Michigan State University, a wave of warblers flitted through the woods. I was bewildered by their varied plumage, and they were so active that it seemed impossible to keep one in view long enough to pick it out in my field guide. It was a grand migration day, but trying to figure warblers out was exhausting work. At one point, I found a warbler with a brilliant yellow underside marked with black streaks that started at the throat like a necklace, and a plain bluish-blackish back without wingbars. I searched through the guide and came to the Canada Warbler, but when I looked up at the exact spot, now there perched a warbler with a brilliant yellow underside with black streaks that started at the throat like a necklace, but this time the bluish-blackish back was streaked and the wings bore very wide, white wingbars. By the time I found the picture of the Magnolia Warbler, the living version had disappeared. I’d vowed that I wouldn’t count a warbler until I saw all the field marks in the same view. Over the next two or three hours I finally managed to identify with certainty a Black-and-white Warbler, a Nashville Warbler, a Magnolia Warbler, and a Black-throated Green Warbler. On May 13, I clearly identified a brilliant Blackburnian Warbler. Although I was out virtually every day that spring, those five warblers were the only ones I managed to add to my lifelist. But the skills I built up teasing out identifications one by one grew quickly—probably also aided by the fact that I became so cosmically addicted. I spent every moment when I was outdoors watching or listening to birds, and as many moments as possible when I was indoors studying my field guides and Joseph Hickey’s book, A Guide to Bird Watching, listening to bird recordings, and poring over my field notebooks and lists. Nothing in my life had ever given me so much satisfaction as the discovery of birds. The joy of learning about them has increased over the years, with my growing skills and the growing number of species I’ve seen. But the joy and sense of accomplishment I felt for triumphing over those first five warblers still warms my soul.
Spring is arriving slowly this year. People in the Twin Cities and Madison, Wisconsin, have been enjoying days when they’ve seen over 20 warbler species, while they’re still few and far between up here. Right now my feeders have fewer birds than they’ve ever had in any May since I moved to Duluth in 1981. But at some point this week, the floodgates will open and birds will be everywhere. Rose-breasted Grosbeaks and Ruby-throated Hummingbirds, Indigo Buntings and Baltimore Orioles will all be filling our trees and our feeding stations with color. And warblers will be decorating our trees like animated Christmas ornaments. I’ll be searching for at least one warbler today to mark my warbler anniversary. Then tomorrow I celebrate another anniversary. On May 12, 1986, the very first For the Birds program aired on KUMD. (MARILYN MONROE—THAT’S A QUARTER OF A CENTURY…MAKES A GIRL THINK. TONY CURTIS—ABOUT WHAT? MM—THE FUTURE!) The future of birds in the northland depends on our awareness of them and their needs. That’s why I started producing the program in the first place, and why I hope to be producing it for the next 25 years. Sometimes people have asked me why I do something that takes so much time and energy for no pay. All I need to do is remember that magical day when I saw my first warblers and the answer glows in my heart. I do it For the Birds.
Laura Erickson at 12:22 AM
Share