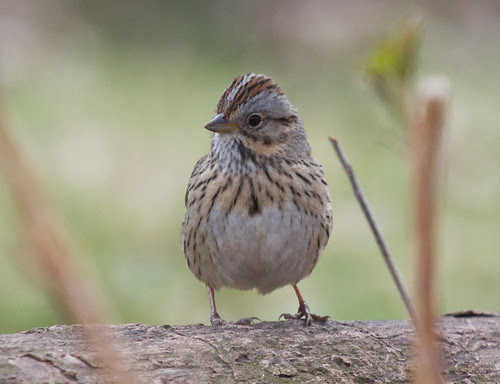 Thirty-six years ago yesterday, I saw my first warblers ever, in East Lansing, Michigan. On the anniversary of this auspicious event, I didn’t see a single warbler, and heard only one Yellow-rump. You’d think I’d have been disappointed, but somehow the day turned out to be a great one, bird-wise, even though I was stuck at home. My feeders have been pretty devoid of birds ever since the Fox Sparrows cleared out a couple of weeks ago, but yesterday a dozen or so Chipping Sparrows turned up with half a dozen White-throated Sparrows and one Lincoln’s Sparrow. I rushed out and set up my photography blind, but then the sky got murky. I snapped a few photos—the best ones I’ve ever taken of Lincoln’s Sparrow—but I’m sure I’ll be out there frequently in the next few weeks trying to get even better close-up photos.

While I was snapping away in the blind, I heard a Red-bellied Woodpecker in my neighbor’s trees. I saw it just before it took off so didn’t get a photo, but heard it again later in the afternoon. While I was in the blind, I also heard a House Wren singing—he’d turned up a few days ago so even though it was cool, it wasn’t surprising. But the catbird that chimed in was surprising—I hadn’t seen nor heard one yet this year up here.

All this was good news indeed, and then I glanced at my hummingbird feeder to see a gorgeous male Ruby-throated Hummingbird. An hour or two later I saw a hummingbird at the feeder again—I didn’t know whether there had been one individual or two, but then saw two chasing each other at the feeder. I set up my new camera with the remote control to try to get photos, but these guys apparently disapprove of paparazzi, so they didn’t stick around long enough for the camera to focus. Through the spring, I’m going to be trying to get some good shots freezing the wings. My new 55-mm lens has a 2.8 aperture, allowing it to shoot photos really fast, which is the only way I’ll succeed in stopping the wings. If I succeed in getting good photos, I’ll post them on flicker.com-slash-lauraerickson, along with information about what I did to get them.

A lot of birders are thrilled when warblers return before trees are leafed out, so they can see them more easily up in the tall trees. Me—I love warblers too much to want to see them too easily. Warblers depend on the tiny caterpillars that hatch right as leaves open up. Two days ago only about half the trees in my neighborhood had discernable buds, and those weren’t very opened up. Today just about all the trees have opened up their buds, and I can even discern tiny leaves in the box elder out my window. Now when the warblers return in good numbers, they’ll have a dependable source of food.

Today is the 25th anniversary of my first For the Birds program. Back in 1986, we didn’t expect to see more than a handful of warblers in Duluth this early in May—usually the ice on Lake Superior didn’t disappear until well into May, and spring seemed to take forever to arrive. Climate change has dramatically changed this in the past decade or so, but this year follows what was the normal spring pattern in 1986. I must admit that after a long winter, I get impatient for warm weather. But once it finally appears, the flood of migrants hits us with a glorious surge all the more splendid because we waited for it.

Producing a radio show for 25 years is nothing compared to the eons songbirds have had to develop their migration systems. I hope they continue to thrive long after I’ve put my microphone down for the last time.
Laura Erickson at 1:48 AM
Share