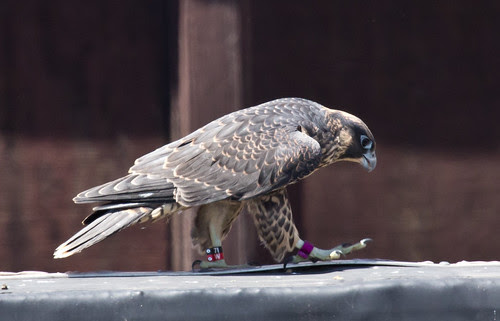 (Transcript of today's For the Birds)
If you have any money to spare in these tough times, PLEASE consider donating to Duluth's Peregrine Watch program!

Every year right around the Fourth of July, baby Peregrine Falcons make a break for independence by taking their first flights. Since May they’ve been peering out of the nesting box on the Greysolon Plaza building, and they’ve spent many hours flapping their wings and then jumping from the box to the ledge of the building, and walking tentatively along the ledge. But the first leap from the ledge or box into mid-air requires both a leap of faith and some anti-gravity karma. We’ve lost birds in past years who crashed into windows, and because so many tourists flock to Duluth during the very weekend that the birds are most vulnerable, heavy downtown traffic is a huge risk. 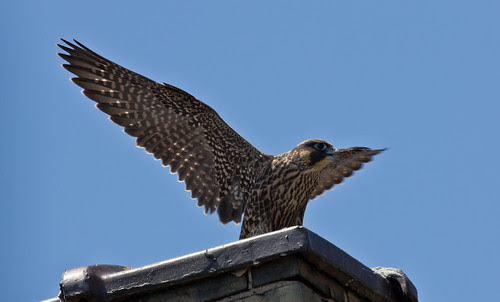 I spent several hours downtown on both Saturday and Sunday, watching the newly-fledged chicks. I joined Hawk Ridge’s Peregrine Watch group, led by the effervescent Julie O’Connor, on Saturday. The one named Waters took her first flight on Saturday morning, and then stayed in one place, sitting tight on some ventilation ductwork, the entire day. She can be recognized at the right angle with good binoculars because her leg band has a W and a 71. 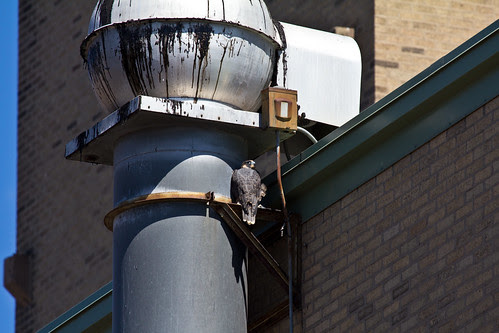 The other chick, named Laura, fledged on Friday, so she was a bit more adventurous, flying on several rooftops. Her leg band has a W and a 70. 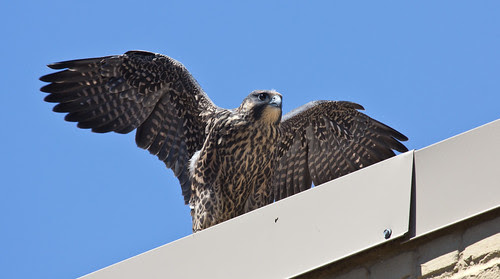 Julie is an excellent observer and also has some magical peregrine intuition—she always seems to know where all the birds are. 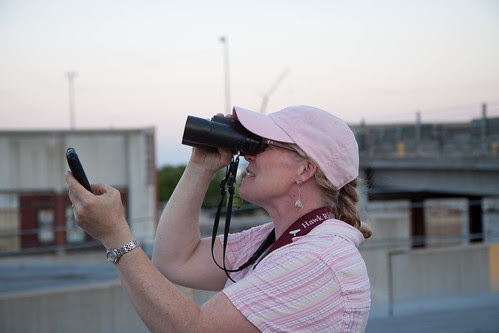 On Sunday, I tracked them with the wonderful photographer Mike Furtman. 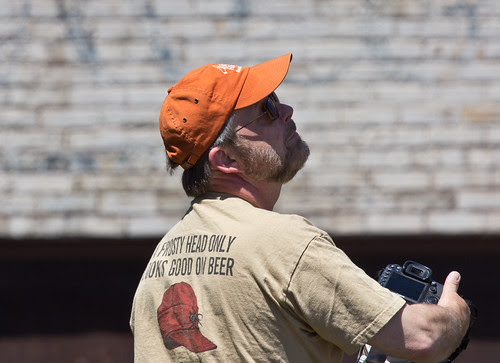 One bird sat tight for several hours on one of the ornamental decorations on the Greysolon building. We assumed that one was Waters... 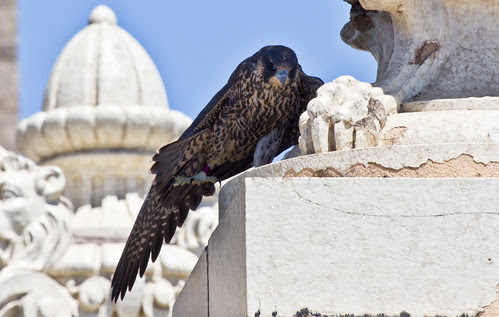 ...and that the more restless one on the roof of the Duluth Opera House and the Norshor Theater Building was Laura until she came close enough for us to see the 71 on the band—she was actually Waters. 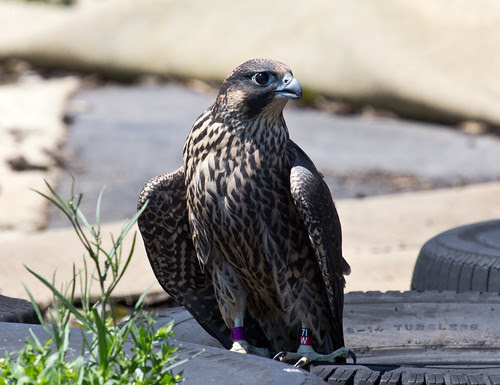 I got lots of photos. The female falcon nesting in the box on the Greysolon Building had been a bird named Amy from 2004 through last year, but she apparently died at some point before May, when people noticed that the bird nesting in the box had a different band number. The new female is named Jenna, and she has an entirely different nature from Amy. 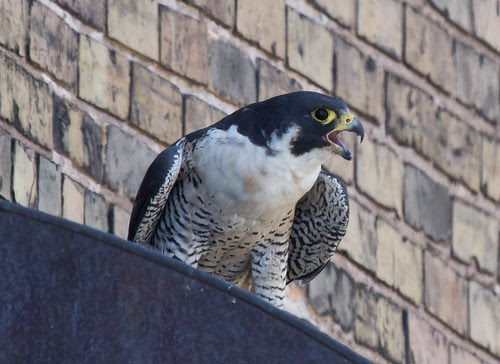 The unbanded male who has been at the box since 2003 had great teamwork with Amy, who was big and aggressive, took on every Bald Eagle who came anywhere near, and took food from him in mid-air, and then took the lead in feeding the young. Jenna is milder mannered, and even sits back allowing her mate to feed the chicks, so he seems to be working harder this year. 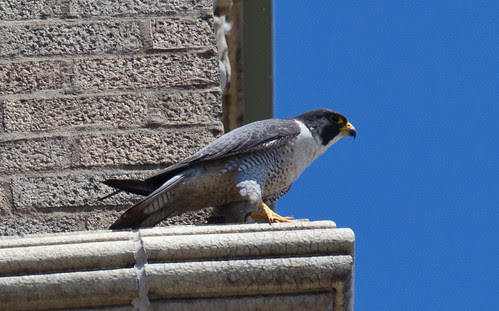 Unlike Amy, Jenna allowed me to come rather close for photographs, though it’s tricky to get good angles when the birds are on rooftops. 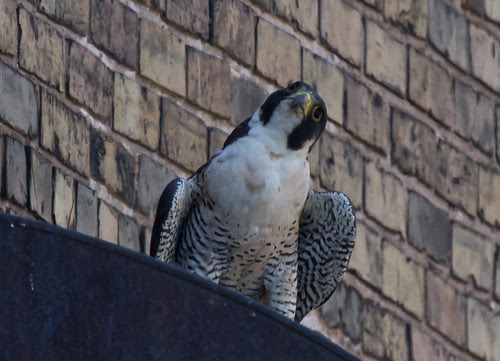 Sunday evening while I was busy getting my photographs up on the internet, Laura the falcon was having adventures downtown. Julie O’Connor called me after getting a call from people at the casino telling her a bird had been grounded. Someone downtown had called 911 about it, and the dispatcher had alerted raptor expert Dave Evans, too. When Julie and I arrived, Laura was sitting on a car parked on Superior Street, with heavy traffic passing by and a small crowd assembled watching her. 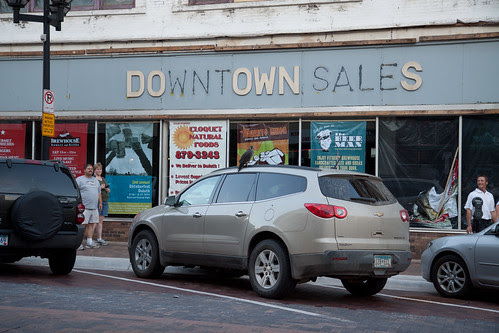 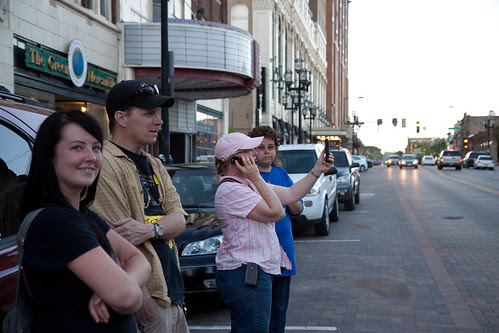 Julie has been dealing with downed peregrines for quite a while, and she figured Laura would eventually fly up to a roof again, but we stayed put to ensure that when she did take off and lost altitude at first we could stop the traffic. It took at least 20 minutes, and the couple owning the car arrived well before Laura decided to release it to them, but they were patient. 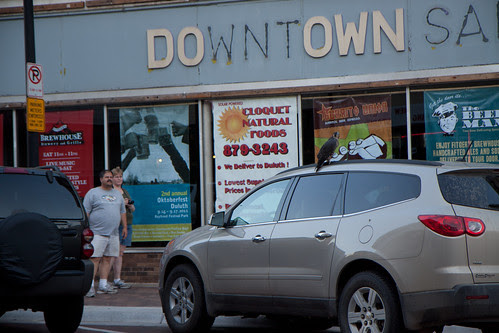 Finally she took off, narrowly missing the windshield of a tall SUV but then gaining altitude and reaching the roof of the casino. 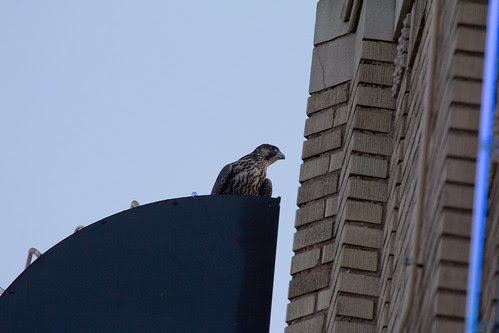 The next few days are going to be treacherous for the baby falcons, and scary for Julie and me and everyone else who has been following this little family. Julie says within a day or two, the flying part becomes very easy for them, but working out the landings is much trickier. I’ll breathe better when they’re truly independent. 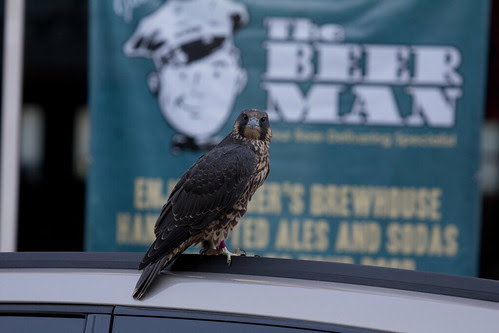