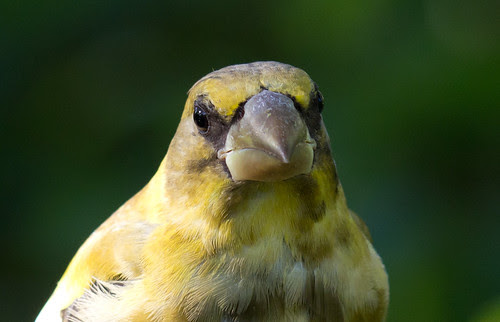 2011 is turning out to be an unforgettable year—it’s the first time in over a decade that I’ve had Evening Grosbeak flocks in my yard, and the first time in even longer that I’ve seen grosbeaks for more than just an hour or two before they headed on. When I first noticed them on August 4, I had at least two pairs of adults (maybe three or four) feeding fledglings, within a flock that numbered about 20 birds. Then for two weeks I had a cohesive flock of 16. The young birds were flying strongly, so there’s no way of knowing where the birds nested, but begging young seems to be a genuinely hopeful sign that there must have been some breeding not too far from Duluth. 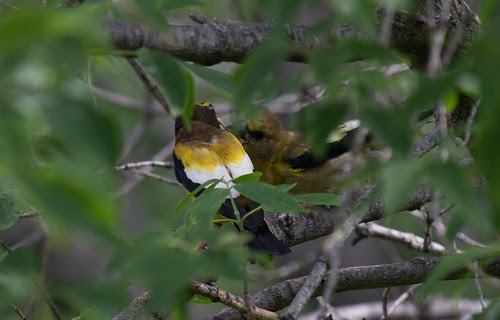 A flock is still visiting my yard every day, but now the birds are absent more often than they’re present, and at times there are fewer birds than when they first arrived. The most I saw all Labor Day weekend was four birds. On the morning of September 6, there were at least seven--four males and three females. But now that the young aren't begging, the birds can be present in my feeders and trees without making any calls, so it's hard to get an accurate count. And they're spending more time hidden in the box elders than they are in my feeders. 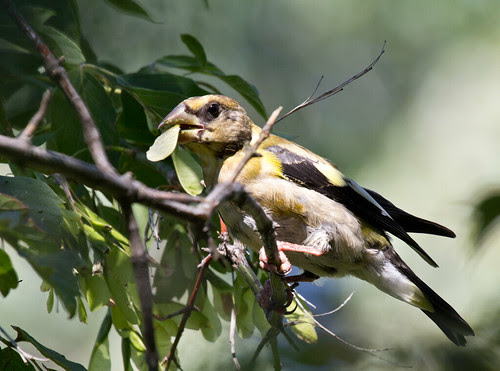 This weekend I watched a young female take a siesta in late morning where a large limb jutted out of the trunk in the back box elder. Part of the time she slept with her head facing forward, and part of the time she tucked her beak in under her back feathers. She stayed in the exact same spot for at least an hour. Her feathers were fluffed and she was the only grosbeak I could find anywhere. I'd also seen her at dawn in my window feeder with her feathers all fluffed, so I grew concerned that she might be ill, but I watched when she woke from her nap and she flew strongly to the upstairs window feeder, then over to the bird bath, and then up to the trees. Her flight was strong and direct, and she was holding her feathers normally. I think it was she who chased two males out of the window feeder later. So maybe when grosbeaks are silent at midday, they’re simply napping. [I didn't want to disturb her, so don't have photos.} 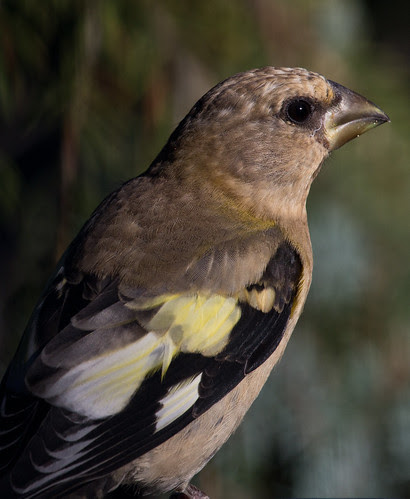 The grosbeaks are enough of a curiosity that they made the Sunday Duluth News-Tribune as well as Sam Cook’s blog. In a way this seems sad--when we moved to Duluth in 1981, Evening Grosbeaks were a backyard constant, abundant in fall, winter, and early spring, and present in at least small numbers all summer. Their steep decline since the 90s has been noted throughout the eastern half of the continent according to Project FeederWatch data. No one is certain about what their numbers were before the 1960s, so we don't know if the high numbers in the 70s and 80s were simply the crest of an exceptionally long natural population cycle and now we’re in a trough, or whether the decline has been a potentially dangerous one. I haven’t heard of any other groups of Evening Grosbeaks this year, but I’m hopeful that my flock isn’t unique, and that the number of adults raising young promises happier times in the future.