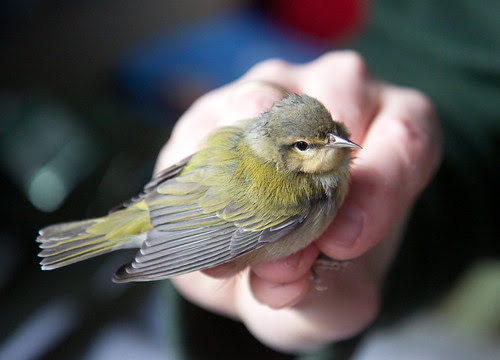 This fall for the first time in my life, I’m learning how to band birds. Dave Alexander, who assists at the banding research station at Hawk Ridge and was trained at the Braddock Bay Bird Observatory in Upstate New York, is showing me how to band songbirds. He’s not just an expert bander—he’s also extremely patient and doesn’t expect me to do anything before I feel ready, which is a good thing for me and the fragile little creatures I’ll be handling.

I went to the banding station each morning over Labor Day weekend, and Dave was training two or three other people along with me. I did was watch, which is exactly what I wanted to do. I’ve handled thousands of birds as a rehabber, but safely extricating them from mist nets is a whole new skill, and a scary one for me. Putting on the leg band with a special pliers made specifically for this is another daunting skill. Even identification is suddenly tricky. A bird in the hand may be worth two in the bush, but birds don’t look quite the same in the hand, and we don’t see many of the behaviors that identify a lot of species before we even see field marks. And whenever possible, we also have to accurately record each bird’s age and sex.

Most of the birds Dave caught on Labor Day Weekend were warblers, and my head was spinning with all the new information I was trying to absorb. When we take a warbler out of the bag, the first job is to identify it to species so we know exactly what size band to put on it. For the most part, that’s straightforward, but if there is any doubt, we double-check using the Peterson field guide to warblers, which has illustrations of fall immatures and adults both. Then the band goes on, and the bander makes a close inspection of all the features that clinch whether the bird hatched this year or earlier, and whether it’s a male or a female. With warblers, sometimes immature males can resemble adult females, so we often have to know the age to be certain of the sex. The young are usually still wearing what are called their first basic plumage feathers that grew in in June or July, while the adults have more recently molted, so the flight feathers can be more worn on hatch-year birds than older ones. And the feathers that cover the bases of the primary wing feathers, called coverts, are often more pointed at the tips in hatch-year than older birds. When it’s not cold out, banders also can gauge a bird’s age by slightly wetting the feathers on its crown and moving them gently around to look at the skull. As with a human baby’s soft spot, the skull bones of young birds are often not entirely ossified, and you can see the pattern of pinkish thin walled areas within the more solid areas on them.

These features vary by species. The reference used to determine it all is a 726-page tome titled Identification Guide to North American Birds, Volume I, by Peter Pyle. This guide only covers songbirds and a few other groups. The rest are in the 835-page Volume II.

After the bander measures the bird’s wing, figures out age and sex when possible, and weighs it, the bird is released. So far I’ve been able to observe Dave banding dozens of warblers of 14 different species. By next year, I too may be banding songbirds at Hawk Ridge, and maybe even the chickadees in my own backyard so that I can finally track the individuals I know so well at my feeders. Now that I’m almost 60, I hope to disprove that adage about teaching an old dog new tricks.