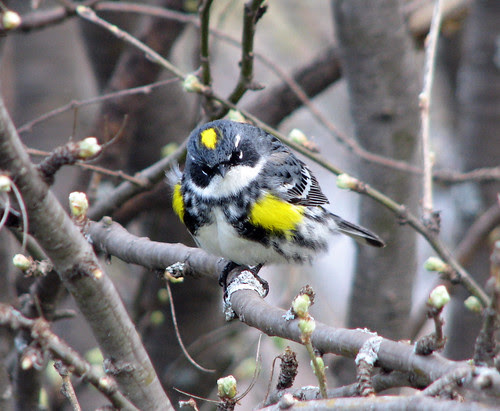 I've temporarily turned off comments on my blog because so many defenders of TNR programs have been spouting off regarding my posts about feral and other outdoor cats, using my blog as a forum for their misguided beliefs. They keep dismissing studies about the numbers of birds killed by cats, but have yet to present a single peer-reviewed scientific paper suggesting a more accurate number, reminding me of global-warming deniers who selectively rip apart scientific studies without being able to put together their own scientific research disproving it. The reason they don't present countering scientific information is because the facts are not on their side.

Meanwhile, they seem to think it's okay for cats to kill small mammals when this is equally inhumane. Also, studies suggest that cats compete with raptors and other small predators for this resource, to the detriment of kestrels and other species.

I'm illustrating this post with a photo of a Yellow-rumped Warbler. A single cat in my own neighborhood once killed at least 18 Yellow-rumped and Palm Warblers during an October migration fall-out in Duluth. I picked up the tiny victims, strewn on a sidewalk, and brought them to the cat's owner. No one was home, but I left the carcasses there, along with a note promising that I would bring the cat to the pound if I ever saw it outside again. That did the trick.

But imagine that. Eighteen beautiful birds killed in a single event—not for food but simply because cats love to play-hunt even when they're well fed. No one has ever shown that neutered feral cats stop killing birds when they are fed, either. TNR? Just say no.
Laura Erickson at 8:00 AM
Share