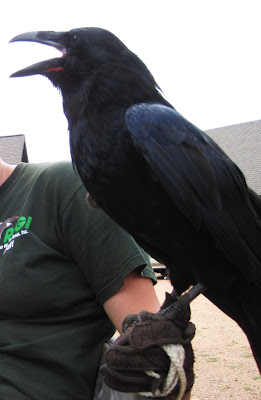 Transcript of next Monday's For the Birds

Every now and then there’s a breaking news story proving yet again that birds are smarter than people typically give them credit for being. A story in the November 6 issue of The Telegraph tells of wild parrots of various species in Sydney, Australia, saying human phrases such as “Who’s a pretty boy, then?” Apparently parrots who learned these phrases from people before escaping captivity used them often enough in the wild that parrots who had spent their entire lives in the wild have been starting to talk, too.

During the decade-long drought in the western regions of New South Wales, parrots who couldn’t handle the devastating conditions started to wander, searching out new areas where food and water were easier to find. Many settled in Sydney, where wild galahs, sulphur-crested cockatoos, and corellas are now regularly heard saying various human phrases. Martyn Robinson from the Australian Museum in Sydney, said “I just hope a pet bird that’s been taught dirty words doesn’t join a flock because we don’t want to hear that kind of thing going around the back gardens.”

People made a big thing about birds teaching one another human language, but we didn’t have to search halfway across the globe to find that out. Marge Gibson, executive director of the Raptor Education Group, one of the finest wildlife rehabilitation facilities in the world, has seen first hand how birds can pick up human language. She treated a female raven with a wing fracture for over a year, and the bird picked up some simple words such as “Hi,” “Hello,” “Hey, you!” and “How are you?” After Marge released the bird, which she called Lenore, the raven occasionally returned to the clinic grounds, and when she flew over visitors she’d call out her favorite phrases. This year Lenore raised chicks and occasionally brought her fledglings over. Marge heard them first babbling baby talk—she said “hello” came out as “hawoo, and “Hey” was “Haaaya,” and by summer’s end they were doing almost as good a job of speaking English as their mother.

This summer, Discover magazine ran a story about how scientists have long known that parrots are one of only three groups of animals, the others being dolphins and humans, who have individual names. In parrots, each bird has its own signature call that others use when addressing it and that the bird uses itself in avian “conversation.” This summer a study of wild parrots showed that even before a chick begins serious vocalizing, its parents provide it with a name which the chick will fine tune and then use throughout its life.

I wonder if research on corvids will eventually show that their social vocalizations are more complex than we suspect. When I had my Blue Jay Sneakers, she learned to say “Hi,” and “C’mon.” The first time she talked, I was on a trip. When Russ heard her saying those words in my voice, he thought it was me and was amazed when he finally realized it was Sneakers. She did most of her talking when I wasn’t around. I think she imitated me when she couldn’t see me to at least hear my voice. The last few years I had her, I was also caring for a jay named BJ who had a congenital deformity making it impossible for him to open his wings. He’d been raised in the wild, and was very scared of people. But he bonded instantly with Sneakers. When Sneakers died, suddenly BJ started saying “Hi,” and “C’mon,” exactly the way Sneakers had done. I can’t explain it except that this seemed to be his way of filling the void and hearing a sound he associated with Sneakers.

People once believed that the earth was at the center of the universe. At some point we’ll see that just as our planet is one of many similar bodies suspended in space, our species is one of many eking out an existence on this little planet. Being a member of a world of species doesn’t diminish human specialness any more than being a member of a family diminishes our individual specialness.