Transcript of tomorrow's For the Birds 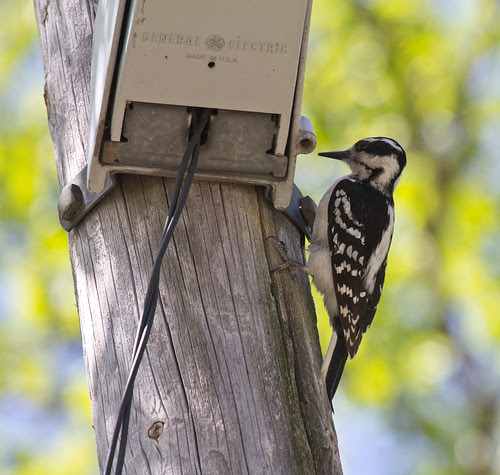 This week I went to one of my favorite Duluth birding spots, along the Western Waterfront Trail, with my son Tom. While we were walking along, we suddenly both heard a woodpecker drumming very rapidly, with an oddly metallic quality. The rapidness of the drumming made me think it must be a Hairy Woodpecker, and the metallic quality told me this bird was not drumming from a tree but, rather, on a manmade structure. Sure enough we found the bird hammering out its territorial drumbeat on a metal clip on a power pole. Woodpeckers try to find the most resonant structure within their territory--drumming on that will make their voice carry farther, both to communicate with their mate and to defend a larger territory. 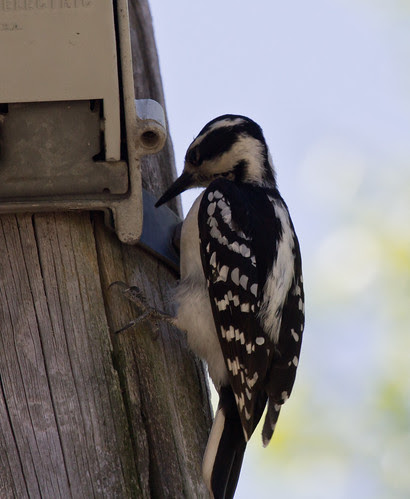 Even though Hairy Woodpeckers are larger, they drum faster than the littler Downy Woodpecker. I can recognize them by the fast rhythm with about 90 percent accuracy, though I must admit it took me a long time and a lot of practice to do this.

Hairy Woodpeckers are a common species found throughout most of Canada and 49 states down to Panama and the Bahamas. In some areas they focus on pine trees, but over most of their range they’re found in a wide variety of forest types.

Common as Hairy Woodpeckers are, they’re inconspicuous during the point in their nesting period when parents are incubating. So of our common resident birds, this is the species most often missed on Big Days in Wisconsin and Minnesota in late May and early June.

Hairy Woodpeckers are often drawn to the drumming sounds of Pileated Woodpeckers, and often follow them when feeding. A Pileated can dig into trees far deeper than a Hairy Woodpecker can, and after the Pileated moves on, the Hairy can dig out bugs it could never have been able to get on its own. To minimize the work involved in digging out larvae within wood, woodpeckers that probe for bugs in trees have a stiff, barbed tip to their extensible tongue. They can dig in to where they can touch a grub and then extend the tongue to hook into it and pull it out.

Hairy Woodpeckers often mate for life. During winter, when they do best in isolation, they apparently still maintain auditory contact with their mate. Up here, when they dig out a nest or roost cavity, they seem to prefer living aspens with heart rot fungal infections that make hollowing out a nest chamber easier.

Like other woodpeckers, Hairy Woodpeckers have smaller eggs relative to body size than other kinds of birds, with a relatively shorter incubation period as well. This is probably because oxygen exchange within eggs is tricky enough without being in a cavity where carbon dioxide builds up and the atmosphere gets very close, especially at night while the incubating parent hardly moves all night. The chicks hatch at a less developed stage than most hatchlings. The parents flying in and out to feed them promotes oxygen exchange, and as soon as they can, the chicks start spending much of their time up at the nest entrance where they can get plenty of fresh air. 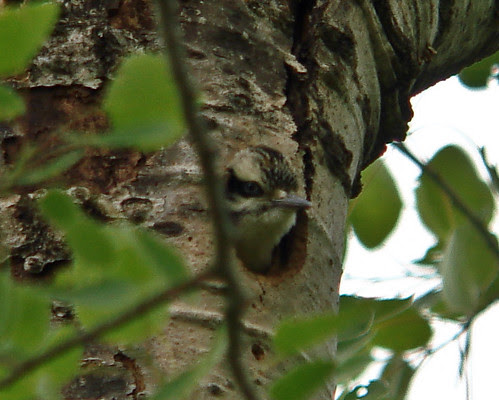 Woodpecker chicks are shockingly noisy, begging for food much of the day in such a loud way that it seems surprising more aren’t lost to predators. Fortunately, their system works for them and so Hairy Woodpeckers are here to stay. 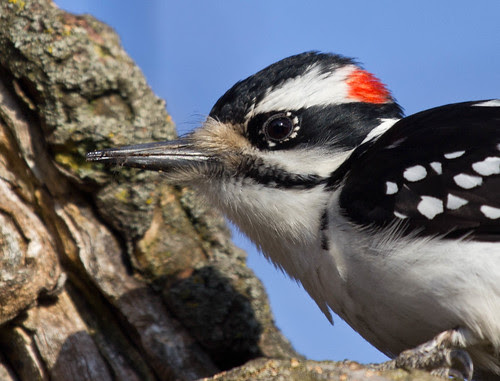