Tomorrow's For the Birds 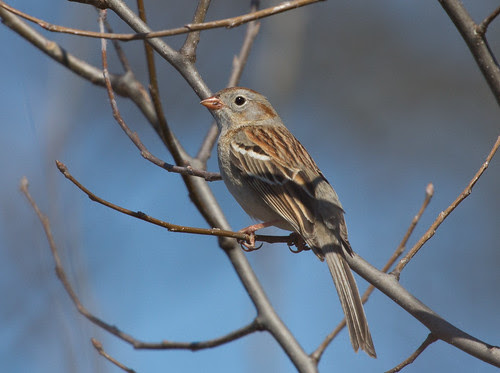 One of my favorite bird songs is produced by the lovely little Field Sparrow. Field Sparrows have soft rusty and gray plumage with an eye-ring that gives them an anemic appearance, and a pinkish-orange bill that makes me think of a pre-schooler trying on lipstick.

I find Field Sparrows adorable, but am utterly charmed by their song. Their slurring notes are incomparably sweet, staying on the same pitch while picking up speed, giving them the rhythm of a drumming Ruffed grouse. When I took college ornithology, I did a study of Savannah Sparrows that nested in a large brushy field behind the house I was living in. I could work out their home territory by playing their calls on a tape recorder and mapping the perches on which they responded. The paper I wrote about the experiment was focused on Savannah Sparrows, but the bird that caught my attention was the Field Sparrow. Savannah Sparrows responded only when I played recordings of the songs of their own species while I stood within their territories, but wherever I stood and whatever species I played, nearby Field Sparrows approached and sang every time. Intriguingly, most studies seem to find that Field Sparrows aren’t particularly aggressive compared to most songbirds, and they don’t defend a territory against other species, but I found them consistently responding much more than other species to recorded songs. It’s possible that they’re simply more curious about everything that happens on or near their territories than the other species in the area.

Those of us in northernmost Wisconsin and Minnesota are at the northern border of or slightly out of the range of Field Sparrows, but just south of us they are a common species of brushy pastures and second growth scrub. Common as they are, they do tend to avoid developed areas much more than Song and Savannah Sparrows do, and so usually appear at feeders only in rural areas. 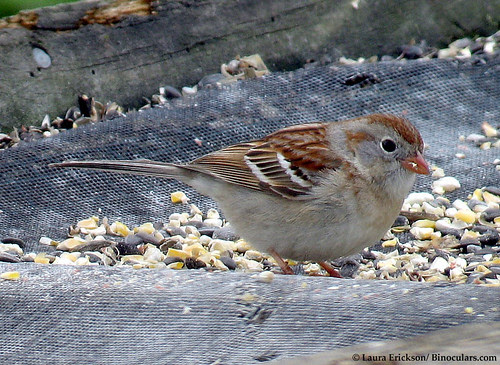 Their numbers are strong, but overall the species is declining for a variety of reasons, including increasingly intensive farming practices, early mowing of pastures, and development. Increasing numbers of White-tailed Deer and Wild Turkeys may also be taking a toll--both game species feed on eggs and chicks of low-to-the-ground nests more than most people realize. 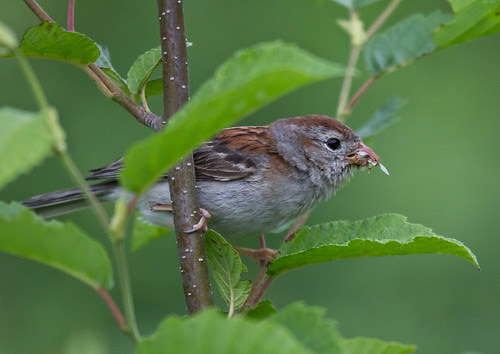 When Field Sparrow numbers are strong, they sing more often, and females more often mate occasionally with neighboring males such that the offspring in a nest may have more than one father.  In one Pennsylvania study, this kind of DNA fingerprinting indicated that in 1990, fully 20 percent of all nests included at least one chick fathered by a male other than the social mate. By 2000–2002, when the population size was significantly smaller, the number of young with different fathers had dropped to zero.

Field Sparrows are surprisingly nurturing and peaceable while nesting. When one pair nested less than 2 feet from a pair of Eastern Towhees, both species fed the young at both nests. In another case, a pair of Field Sparrows and a pair of Common Yellowthroats actually shared the same nest, both incubating full clutches at the same time. I treasured Field Sparrows long before I knew that. It’s yet another case in which the more I learn about a bird, the more wonderful it turns out to be.
Laura Erickson at 5:13 PM
Share