Birding for the Soul: Blue Jays 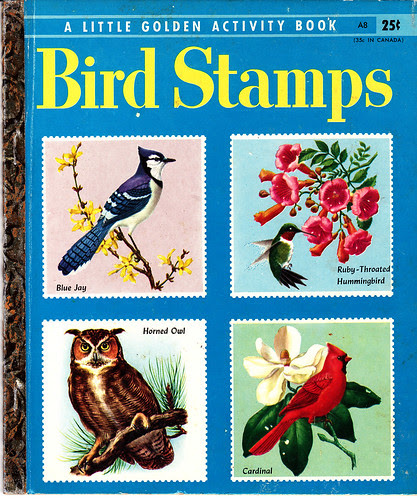 When I was a preschooler, my Grandpa gave me the “Little Golden Activity Book,” Bird Stamps. It had 18 pages, each with a drawing of a bird to color, a paragraph of information about it, and a rectangle in which to place a colorful stamp showing it. This was the very first book I ever owned and I was too scared of damaging it to color the pictures, but I loved poring over the pages, hoping I could see some of the birds. The book had three species that I was aware of in my own neighborhood: the robin, cardinal, and House Sparrow. We had a vacation in Lake Geneva, Wisconsin, while we were little, and I heard a loud squawky sound and looked up to see a Blue Jay—unmistakable after seeing that vivid stamp! The Blue Jay perched in a branch at the top of a tree to give me a long, satisfying look, and seemed to wink at me before taking off. It was a thrilling moment. 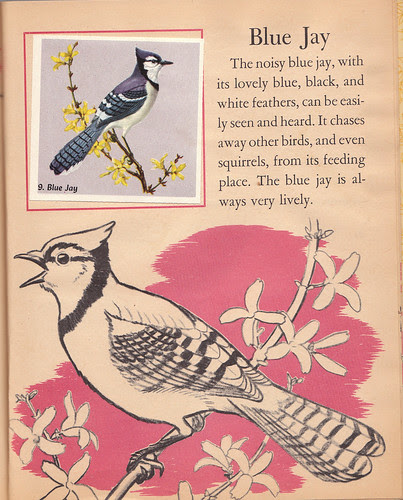 That was the last Blue Jay I saw until I took up birding two decades later, in 1975. The Blue Jay was #14 on my life list—I saw my lifer right near our apartment in Lansing, Michigan. Blue Jays were from the start a favorite thanks to my Little Golden stamp book, and I recognized their call right off the bat thanks to that noisy one I’d seen so long ago in Lake Geneva. Whenever I saw one, I felt a special surge of joy because they were so beautiful. 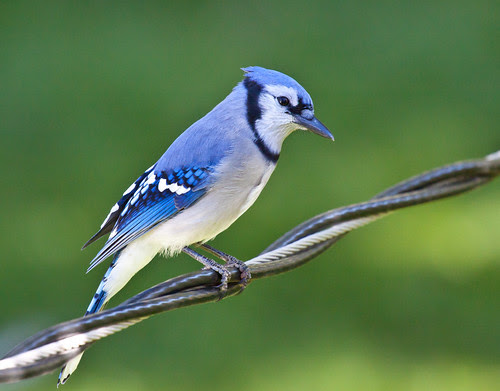 A bird with so much to recommend it aesthetically was plenty good enough for me. Then in 1979, when I was birding in a park in Madison, Wisconsin, with a friend of mine, we came upon a Blue Jay fledgling.  The little guy was quite literally playing on the playground equipment—he would hop up to the bottom of the slide, and then flutter as hard as he could to work his way up the slippery slope. He’d never get even halfway up before he slid down, face first, flapping his little wings as hard as he could until he slid down to the bottom. His wings flapped very fast, and so when he reached the bottom he’d stay aloft for a whole second or two before dropping to the dirt below, only to start the process over again. It was one of the most adorable things I’ve ever seen, even now. My friend took photos of the little bird, and then we went home. 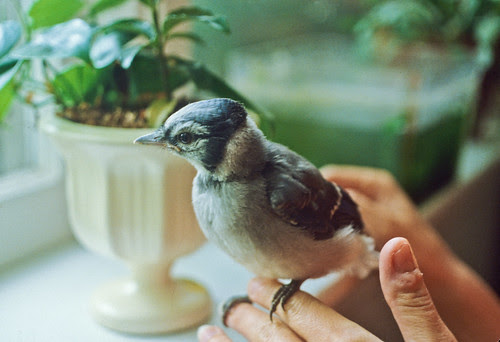 It was when I got to my apartment that I started growing concerned. I thought back and vaguely remembered seeing adult Blue Jays flying back and forth overhead, but they completely ignored the fledgling, even when my friend and I picked it up for a couple of photos. So I went back to the park just in time to discover the baby jay in the mouth of a golden retriever. Fortunately, it must have been a well-trained hunting dog because he held it gently and when I commanded it to had over the bird, he did! There were a few drops of blood and a good supply of saliva on the bird, but it was otherwise okay. But when I first came upon it, still in the dog’s mouth, I noticed two peculiar things—the parents both flew over and ignored the situation, and the baby bird didn’t make a sound. I surmised that it was somehow voiceless, and perhaps deaf, and that the parents didn’t notice it once it left the nest and wasn’t making proper vocalizations, which are what help Blue Jays to find and recognize their chicks. From the moment I took that little bird out of the mouth of that dog and its eyes met mine, an electrical surge seemed to go through me that sparked a life-long love affair with one particular Blue Jay and its entire species. As captivating as Blue Jays were to my eyes, it turns out they’re even better at capturing my heart. 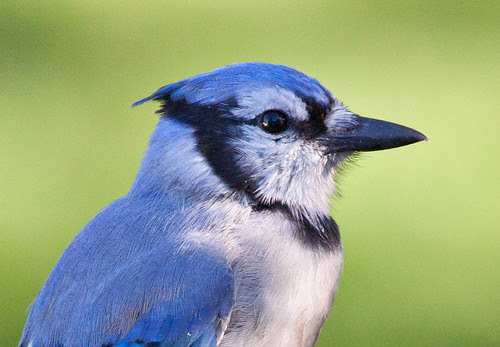