I spent last week birding in New Hampshire. On Wednesday, I went north, to the White Mountains, in hopes of pretty much the same northern birds we get in the Sax-Zim Bog and Boundary Waters area. Unfortunately, New Hampshire is prone to the same autumn weather patterns that we are in the North Woods. I’d had a perfect sunny day on Monday on the coast, and a perfect sunny day on Thursday when I went to a popular hawk watch site, but Wednesday started out rainy and although the drizzling finally stopped, the gloomy darkness remained. We didn’t see many birds at all thanks to the weather, but I didn’t even care. I was out with one of the premier birders in the state, Dave Govatski, who has personally hiked every single mile of trail in the White Mountain trail guide, and personally skied every mile of cross country ski trails in his entire state. He’s one of the most committed conservationists I’ve ever met, who spearheaded a lot of great projects to protect valuable habitat and to create wonderful paths and boardwalks to make them accessible with minimal damage to vulnerable ecosystems. I know a lot of people who are creative and knowledgeable, who can come up with great ideas for protecting important places, but Dave is not just a visionary—he’s a doer and an effective project manager who has the practical experience, passion, and energy to see the projects all the way through, beginning with the fundraising. He’s a veteran, and credits his military experience with giving him the practical know-how to get things done.

Dave brought me to several spots where moose are often seen, including places where some people had seen them earlier that day, but we didn’t see any at all. I’d seen one feeding in a pond while driving up to his house, but that was on an interstate with a semi right behind me and one in the left lane, so I had no margin of error to slow down at all. Moose are very much threatened by climate change, their future not at all secure, but despite the fact that I didn’t get any good looks, they seem to be doing quite well in New Hampshire, where there are moose crossing signs all over the place.

Dave Govatski and I also got skunked on Boreal Chickadee, Gray Jay, and Black-backed Woodpecker. We crossed the Vermont border to get to the place Dave thought would be best for Spruce Grouse, and in that case we had wonderful luck, with a gorgeous male right there on the path ahead of us. As we approached, the bird didn’t flush—he simply strolled a short ways off the trail, giving me wonderful looks. I don’t like to use flash, and the light was very, very poor, but I took dozens of photos and a few turned out okay, even taken at 1/20 of a second using an ISO of 1600. 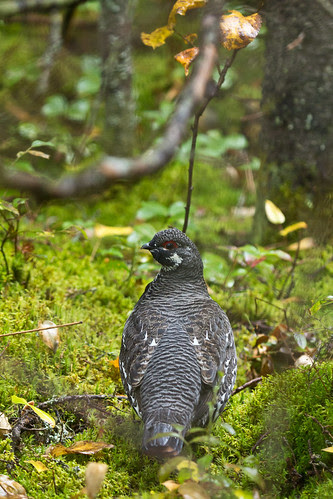 As fun as it was spending a day with a superb naturalist, it was also fun to meet Dave’s wife, who actually lived on Peabody Street when she was a little girl. Her house was just a couple of blocks from mine, and she went to St. Michael’s School just down from me. This of course made me think of the differences between human migrations and bird migration, which somehow doesn’t seem as random. Then again, I didn’t ask a single bird I encountered whether it had spent time in Duluth, and now I’ve migrated back. I could ask my backyard birds whether any of them have spent time in New Hampshire, but I suspect that most of them aren’t talking. 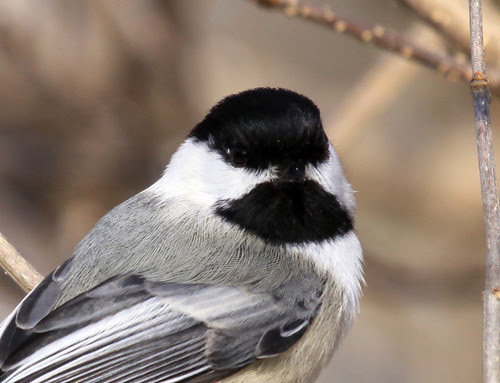