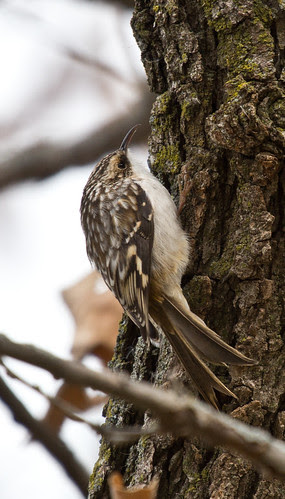 Last week I went birding with a few friends in the Twin Cities. It was a murky October morning, and despite temperatures in the fifties, the breath of winter was in the air. Birds were scarce and hard to see. Robins quietly rummaged in the oak leaf litter for grubs and worms. Blue Jays were drawn to the acorns. We found Fox, Song, White-throated, and American Tree Sparrows, and a few juncos. And of course chickadees were about, most conspicuously picking through the soft, wispy fluff on dried up weeds. 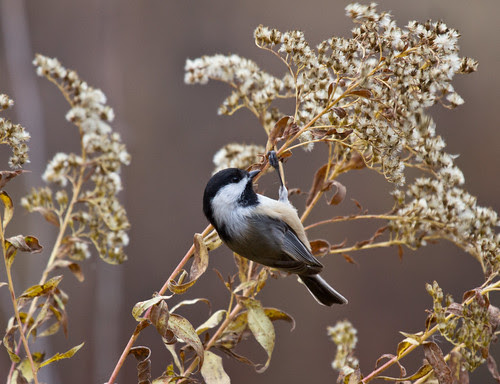 Migrating songbirds are attracted to chickadee flocks and, sure enough, we picked out Ruby- and Golden-crowned Kinglets, Palm and Yellow-rumped Warblers, and a Brown Creeper. 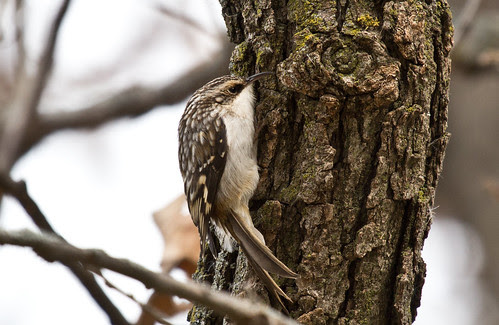 The creeper was the last new bird of the day—the pièce de résistance of a pleasant morning. Since I’ve taken up photography, the Brown Creeper has been one of my nemesis species—I’ve gotten plenty of photos, but not very good ones. But this creeper was reasonably close and I managed to get at least a couple of clear ones.

It’s small wonder that I have so much trouble getting pictures. W.M. Tyler wrote in his species account for the Brown Creeper in the Life Histories of North American Birds, “The brown creeper, as he hitches along the bole of a tree, looks like a fragment of detached bark that is defying the law of gravitation by moving upward over the trunk, and as he flies off to another tree he resembles a little dry leaf blown about by the wind.” The Brown Creeper bears plumage that camouflages it against tree bark, and its call is so thin and high pitched that many people cannot even hear one a few feet away. Its nest is so inconspicuous, tucked behind a loosened flap of bark, that it took until 1879 for naturalists to find one, even though Brown Creepers nest throughout New England. 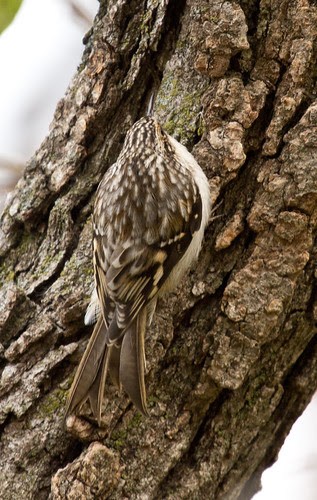 Brown Creepers spend summer in closed canopy forests with lots of large dead and dying trees for nesting and large living trees for foraging. They use a wider variety of wooded habitats in winter, and you never know where one will turn up during migration. They often appear in my Duluth backyard. I saw my very first one at the Morton Arboretum outside Chicago on December 16, 1975—#113 on my life list. I knew what it was right off the bat because I’d noticed the drawings in my field guide and read about the species’ habit of creeping up a tree and then fluttering to the base of a nearby tree to creep upwards again. I found the real thing even more charming than the description.

When I was a teacher in Madison, Wisconsin, in the late ‘70s, a Brown Creeper crashed into one of the windows on our school, and our maintenance man brought it to me. The bird had a concussion and slightly sprained wing, and so we kept it in the classroom for a couple of days before releasing it in a nearby park. In the same way that creepers spiral up trees in the wild, this one spiraled up children’s pants legs and knee socks, and eagerly took mealworms out of our hands. I was utterly taken with this confiding little bird. When we brought it to my favorite park for release, it didn’t fly off immediately, and when it did, it simply dropped to the base of the nearest tree. We got to watch it spiral up, then drop to another nearby tree and creep up, again and again before it got too far away for us to track. Ever since, whenever I see a Brown Creeper, I think of that bird and the lovely experiences it gave my students and me. This gentle, quiet little bird goes about its life so unobtrusively that I suspect most Americans don’t even know it exists, yet the world is richer for having such treasure. 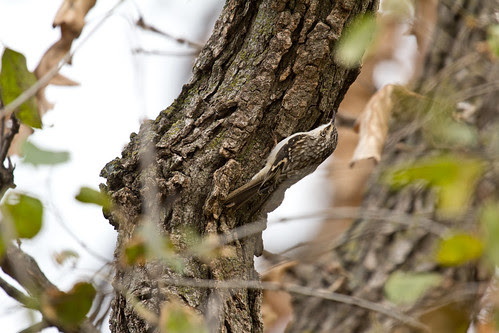