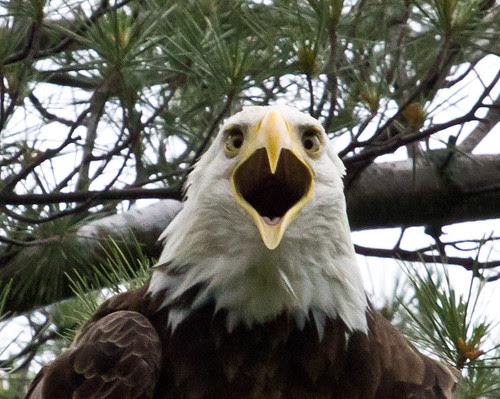 This week, a strange bird story on a golf course made the national news. I linked to it on Facebook, and one of my Colorado friends, Kim Sayers, added a story about her own strange bird encounter on a golf course. She wrote, “My neighbor teed off at a par three hole. A Canada Goose was sitting on the green and she hit it in the butt. Her ball bounced off the goose and landed a few inches from the cup. The startled goose let out a squawk and went running. While we were walking to the next stroke, the goose came stomping back, and used its beak to roll the ball off the green. I was laughing so hard I could barely walk, and my neighbor, who was expecting an easy one putt, asked why. I said, "Where's your ball?"

A friend from Washington contributed his own story. Ian Paulsen wrote, “This reminds me of the time I was watching a Bald Eagle trying to take a flounder from an Osprey. After a brief battle the Osprey dropped the flounder. It landed in someone's backyard. I wonder what the property owner thought when they found the flounder in their yard?”

This week’s original news story that inspired these tales came from a San Juan Capistrano golf course when a course marshal came upon a live 2-foot leopard shark on the 12th tee. The fish had fallen out of the sky when no one was looking, though it bore bleeding puncture wounds consistent with having been carried, and dropped, by an eagle or osprey. Golf course staff managed to get the fish into a bucket of water and quickly released it into the ocean, so the story probably had a happy ending for everyone except the hungry raptor.

Perhaps the most amazing bird story of all was reported inthe New York Times on an April Fools Day, though the story was not a joke. On March 30, 1987, an Alaskan Airlines jet—a Boeing 737—took off for Yakutat at mid-morning. The crew noticed a group of Bald Eagles circling to the south of the runway. One eagle was off to the left, and the crew was relieved to realize they would pass underneath it with room to spare. But they could also see that the eagle was carrying a large fish, and as the jet approached, the eagle dropped it. The pilots reported watching the fish falling toward them as if in slow motion. The fish hit the plane just behind the cockpit window on the captain’s side. All the controls seemed to be working, but the crew contacted Alaska Airline’s dispatch and maintenance control for further instructions. They were told to continue on to Yakutat, where a maintenance crew would be flown in to inspect the plane.

The pilot explained to the passengers that they’d had a mid-air collision with a fish and told them they’d have to deplane and wait inside the Yakutat airport terminal during the inspection. This had happened during a time when there had been reports of pilots flying under the influence of alcohol and/or drugs, and so passengers could be forgiven for feeling a bit skeptical. But sure enough, the plane was dented; a greasy spot, trail of blood, and fish scales told the story. One FAA inspector was quoted saying the remains of a 3–4 pound fish were wedged in near the forward door and the wing root.

The mid-air collision with a fish made it into the New York Times and Ripley’s Believe It Or Not! Naturally all kinds of lame jokes have been used in news stories about it, such as calling the incident an example of fly-fishing, Alaska style. But as with most satisfying stories about such close calls, there was little loss of life. The passengers and crew were all fine and the eagle got away. The only fatality was the fish.
Laura Erickson at 7:56 AM
Share