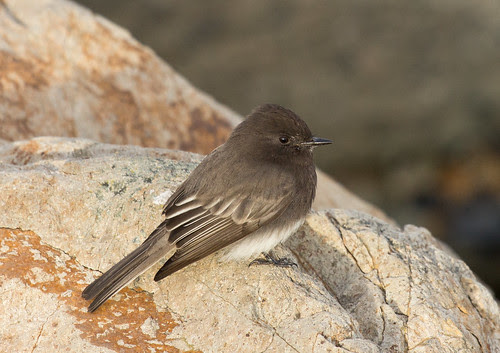 On Christmas, 1974, my husband’s parents gave me my first field guide and binoculars—the best Christmas present I ever got. Between Christmas and the following March, I pored over the Peterson guide and then the Golden Guide, trying to memorize all the possibilities before I set out to be a birder. As I went page by page through the Golden Guide, I saw in the middle an elegant little bird, slate gray all over except for a white belly and white on the outer tail feathers. I thought I’d be able to keep that one straight, but then close to the end of the book I discovered another bird with the same description. The bird in the back was the Slate-colored Junco, now called the Dark-eyed Junco. The one in the middle was the Black Phoebe.  Seeing two entirely unrelated birds with such similar markings was sobering—identifying birds was going to be a lot harder than I’d thought.

I saw lots of juncos that first year but stayed well out of the range of the Black Phoebe for over seven years—they live in coastal California and along the US side of the Mexican border all the way down into northern South America. I didn’t need to worry about confusing Black Phoebes and juncos because I quickly got a good sense of what juncos were like and could identify them by shape and behavior within days of seeing my first one. By the time I saw my first Black Phoebe in Las Vegas in 1982, I was so familiar with Eastern Phoebes that the similarities were too strong to miss, and the color pattern similarity with juncos turned out to be completely unimportant.

Like Eastern Phoebes, Black Phoebes sit fairly erect and persistently wag their tails. They flutter out to catch flying insects and return to the same perch or fly to another nearby perch, often close to the ground.  They virtually never walk, hop, or even shift position, moving about almost exclusively on the wing. Every one I’ve ever seen has been close to water, from running streams in Costa Rica to sewage treatment ponds and ocean shoreline in California. They’ve allowed very close approach, but their facial plumage is so blackish that even at close range, I need good light to distinguish the eyes from the surrounding plumage. Last week Russ and I spent a few days in southern California. He spent the days at meetings while I was walking about birding. I came upon several Black Phoebes, and as is usually the case, some of them were extremely cooperative, so I did get a few nice photos.

Black Phoebes require not just water but good supplies of mud for building their nests onto a secure substrate, so pairs tend to be protective of their nesting areas. Perhaps because of this nest site fidelity, pairs tend to nest together year after year, usually beginning to nest weeks earlier than new pairs, probably both because they don’t need to establish a pair bond and because they already have identified a good nesting site. In winter, they’re fairly solitary. It’s tough eeking out an existence fueled on flying insects when predators lurk everywhere. But Black Phoebes do it with grace and style. Every moment I’ve ever spent in the company of a Black Phoebe has been a moment well spent. 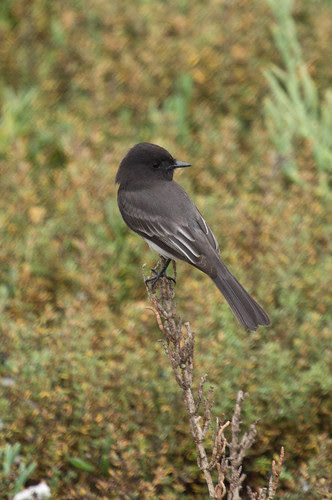