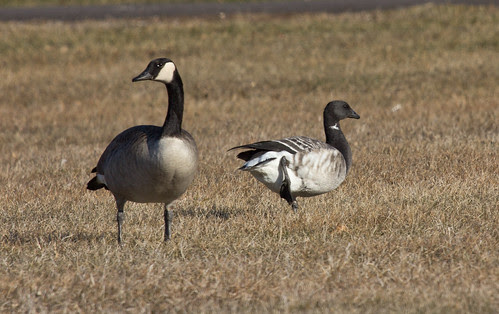 This morning Shawn Zierman, a Minnesota birder, found a Brant on the ball field at Park Point. He immediately called Sparky Stensaas who sent the word out on the MOU listserv. The moment I got the email, I grabbed my camera, hopped in my car, and drove straight to Park Point.

Brants are geese who breed on the tundra and normally spend their winters in salt water. There are two forms that used to be considered separate species—the dark-bellied one winters along the Pacific coast and the light-bellied one along the Atlantic. A lot of Atlantic birds were displaced following Hurricane Sandy, apparently including this one. It was hanging out in a flock of Canada Geese, and looked surprisingly tiny next to them. All the birds were grazing on the lawn , but this one seemed hungriest—even as the flock started moseying along, this one kept gobbling down grass even as it kept up with the others.

In winter, Brants usually feed on marine plants and short native vegetation, but eastern birds have adapted to eating lawn grasses as well, which is lucky since this poor bird is a long way from any marine plants. I always have sort of a sick feeling about birds far from their natural range, but this one probably has as good a chance as any bird of finding its way home. 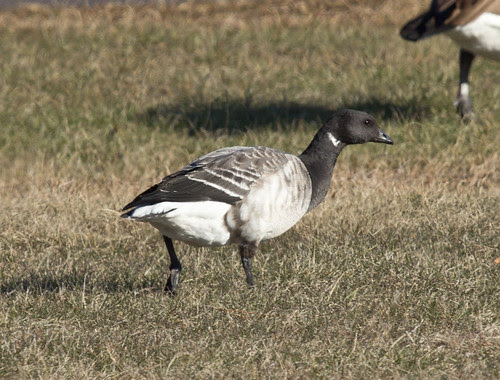 It does seem a bit troubling that it was the only one of its kind in the flock—like other geese, Brant mate for life, and young birds remain with their parents through fall migration and often through the entire winter, so this bird was either separated from its family or the others were killed in the storm. Brants do tend to return faithfully to the same breeding and wintering grounds, and once lost birds get their bearings, they usually easily find their way home, so if this bird is a paired adult, it may well return to its territory in spring, and if its mate survived the storm, they may end up back together. If it’s a first-year bird, it should at least eventually find its way to the area where it was raised.

Brant families remind me of my own family on my mother’s side. Like more than one of my relatives, Brant pairs stick together through thick and thin over many years, yet have a tendency to stray now and then—the average female Brant  visits one or more males other than her mate during each nesting season. (Ornithologists keep track of her comings and goings by taking DNA samples of offspring, but obviously the males are mating with them.) Like my relatives, Brant families hang out with family and neighbors, and sometimes one pair will stick around minding everyone’s offspring while the other pairs wander off, maybe taking in a movie or wandering over the tundra to get away from the commotion or responsibilities for a while. Goslings and parents do recognize one another, and at the end of a big get together, the families sort themselves out the way my cousins and we did after a long visit.

When I see an off-course bird like this Brant, my motherly anxiety is immediately aroused, but that isn't sensible. The little bird may be over 1500 miles from its normal range, but it seemed perfectly at home here, and once it regains its body fat will most certainly set out and find its way home without some silly human playing mother hen. We only suppose out-of-range wild birds feel bewildered because that's how we would feel in the same situation. Brooks Atkinson wrote, “Although birds coexist with us on this eroded planet, they live independently of us with a self-sufficiency that is almost a rebuke… We are not that self-reliant. We are the ones who have lost our way.” 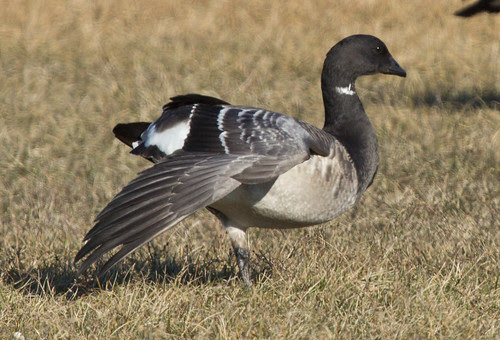