A very hard spring for birds 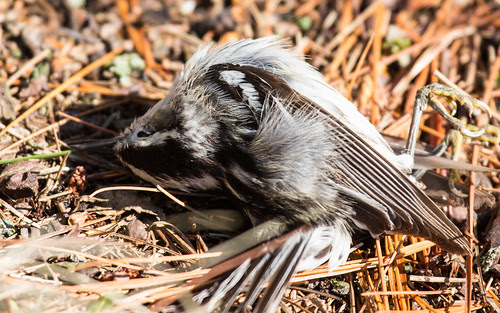 This year’s exceptionally cold spring is exacting a toll on many birds. Warblers, flycatchers, and other insectivores that winter in the tropics time their return for when trees should be leafing out, fueling their migration on the caterpillars that emerge right then. Migrants of species that normally would have passed through northern Wisconsin and Minnesota weeks ago are still lingering well south of here, and many migrants that passed through at the normal time have died or are still in big trouble. 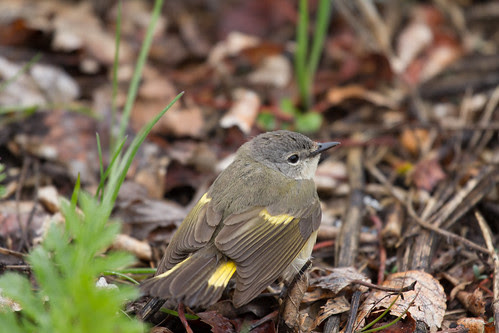 This year’s late leaf-out meant there was no food for many migrants that arrived at the usual time. On May 19, Duluth experienced a huge “fallout” as migrants flooded through Park Point exactly on time—if this were a normal year. I was out of town, but read reports of the amazing spectacle via the Minnesota birding listserv. 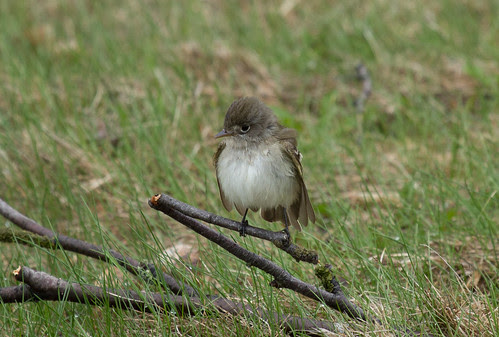 On May 22, Karl Bardon, one of Minnesota’s finest birders, posted on the Minnesota Ornithologists’ Union listserv:

The fallout of warblers, which occurred on Sunday, May 19th, continued for four straight days! I have never known this to happen, but the strong Northeast winds, rain, and fog, which grounded the birds on the 19th, continued until Wednesday afternoon, giving the birds no option to leave. Even more amazing was that all these hundreds of warblers fed mostly on the ground, giving unparalleled views. Of the 25 species I saw the last four days, all of them were seen at close range within just a few feet. I had numerous warblers try to land on my tripod while taking photos and a Black-and-white Warbler even landed on our legs! On Tuesday May 21st I counted all warblers seen in a 3 mile stretch of Park Point and had a state high count of 452 Palm Warblers, with smaller numbers (nothing record breaking) of 22 other species, including 3 Connecticuts.

Sadly, these birds arrived exhausted and hungry. In their desperate condition, many of them resorted to picking through debris along the shoreline of Lake Superior or trying to find food in other inappropriate places, as Karl noted. And some succumbed to hypothermia and starvation.
Had the cold weather been part of a brief weather pattern, those birds that made it through the first night or two would have been able to move on once it was over, but the cold, wet weather didn’t let up. I arrived two days after the big fall-out to beaches still teeming with hungry warblers. I’ve never had so many opportunities for close-up warbler photography, but there was no pleasure in snapping pictures of such cold, wet creatures. 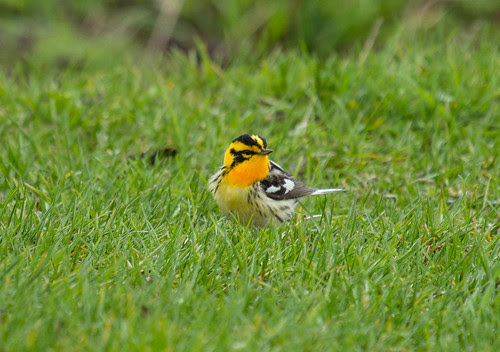 I found one Black-and-white Warbler that had apparently dropped dead from a pine tree on Park Point. Merlins, Sharp-shinned Hawks, and Cooper’s Hawks time their own migration to coincide with songbird migration, so many weakened birds were eaten.

Many songbirds, of course, did survive the harsh migration and have already made it to their breeding territories, and more are still arriving, but I suspect our north woods will not resound with as much bird song as usual this year. Right now, as the cold continues, finding food is a far more urgent matter than establishing a territory. And if Neotropical migrants are in shorter supply, the ones that do make it back won’t have to work as hard to defend territories, so there won’t be as great a need to sing often. Oddly enough, the robins in my neighborhood are not singing much at all this year, though they have a much easier time finding food than warblers. 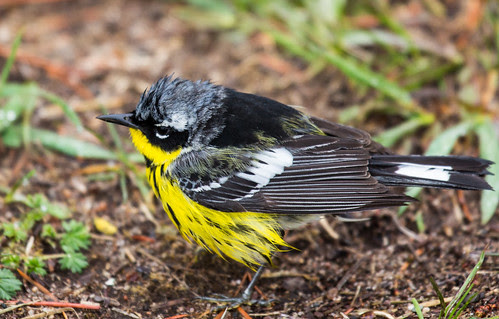 We can never blame any particular weather event, or any individual seasonal weather pattern, on climate change, but ironically, this freakishly cold spring is consistent with predictions for a steadily warming planet. Insurance companies are being squeezed by the huge upsurge in weather-related claims, but overall, people seem to feel either complacent or impotent to do anything about how much carbon we continue to squander. Some people have told me they’re just not going to worry about this sort of thing anymore because there’s nothing we can do about it anyway. But in the 70s, we got the Clean Air, Clean Water, and Endangered Species Acts passed, lowered the speed limit, started the EPA, and set emissions and fuel efficiency standards for automobiles all within a few short years during a conservative Republican administration not by being apathetic or feeling helpless but by being certain that we COULD effect change. That kind of optimistic empowerment is the only way we're going to get back on track now. Every distressed warbler I see reaffirms my commitment to protect these plucky little wanderers and the world we share.