Every year starting about now, I get emails and phone calls from well-meaning people who took in a baby bird—often without even knowing what species it is—who fed it for a few weeks and now want to release it. It ever surprises me how many people seem to ascribe to the outdated, long-ago-disproven idea that baby birds are instinctive robots needing nothing but food and protection for the first month or two of their lives, and that as soon as they can fly, they will perfectly capable of leading rich and full lives on their own even if raised in an artificial environment without any of the vital training their parents would have given them. In the real world, parent birds of most species provide an in-depth education to their young, teaching them a variety of subjects that may include their species’ vocalizations and when to use each call and song, how to get along with their own and other species, how to recognize all kinds of different dangers and deal with each, which habitats are appropriate and how to find food in each one, what are the best places for roosting and hiding out in the event that a predator appears, and all kinds of other topics, depending on species. Whenever possible, modern professional rehabbers do their best to place nestlings in a nest of their own species with young at the same stage of development. When I was a licensed rehabber who had to raise baby birds on my own, I gave them “gentle releases” in my own yard or, where the species warranted it, at my mother-in-law’s place in Port Wing, Wisconsin. The bird could return to me for food whenever it wanted as it learned, slowly on its own, how to deal with life. This was obviously not a perfect system, but at least gave the birds their best chance, though it involved a lot more time and effort on my part than normal people without training are willing to invest. 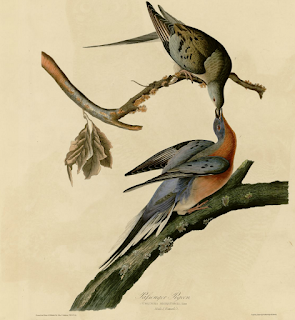 Today there was a story in the news about some scientists, experts in the specialized discipline of DNA cloning, who are trying to bring extinct animals back to life via what they call the Resurrection Project. Like people who think baby birds need nothing but attention to their bodily needs, these DNA experts are well-meaning, but obviously know little about living, breathing, creatures except what can be inferred from their genetic code. News reports suggest they are trying to bring back to life the Passenger Pigeon using DNA from specimens killed in the 1800s. I’m sure they are developing the techniques necessary to one day bring to life some bodies of extinct animals, but like those who raise baby birds without understanding what they need to survive in the real world, these scientists restrict their focus to bodies alone. Passenger Pigeons are tinier and more innocuous than Frankenstein’s monster, but animals resurrected from extinction via DNA will be mere shells of what were before their species’ vital chain of existence was severed by extinction. The behaviors and mental processes unique to each individual of each species can’t be restored simply by replicating a genetic code.

The current project of raising Whooping Cranes in captivity and training them to learn their migration route by following an Ultralight airplane their first autumn is still very much an experiment. This is the 13th year of the project, which is being conducted by a wide array of specialists, including scientists recording behaviors and vocalizations of wild Whooping Cranes on their breeding grounds in Canada, veterinarians, people who have bred cranes in captivity, habitat management experts, and DNA specialists to ensure that there is as much genetic mixing as possible.

Many of the cranes raised in the program have reached breeding age. Of the 20 nests offspring of this program started in Wisconsin this spring of 2013, 17 failed within a three-day period in May, due to black flies. Scientists have studied Whooping Cranes in the wild for over a century, but we have yet to comprehend all the things successful cranes do in the wild to rear their chicks. Operation Migration scientists rearing them use crane puppets and have the technology to play an assortment of vocalizations in what we believe are the right contexts to give these chicks some of the education wild parents would give them, and the young birds spend time socializing with captive adults.

Clearly we are doing everything possible, based on what we understand today, to help these young birds grow as naturally wild as possible as we try to bring this population to sustainable numbers, but after 13 years, we haven’t had enough pairs successfully reproducing to know whether we’re still missing key information to raise these chicks anywhere nearly as well as wild parents would. I don’t know how we could possibly presume to know what Passenger Pigeon parents did in raising their young, when none have been observed in the wild in over a century, when we have no recordings of their calls or observations of parents interacting with their chicks, or any other information essential for giving a chick anything close to a natural upbringing.

It’s only human that people yearn to bring back what was lost, and it’s only human to be arrogant enough to think some understanding of DNA is all we need to accomplish it. Scientists are going to experiment, and if they succeed in bringing back anything genetically resembling a Passenger Pigeon, the poor bird will most certainly be stuck in captivity. But I sure hope people don’t start thinking the Resurrection Project has anything to do with conservation, anymore than Dr. Frankenstein’s experiments had anything to do with medicine.

Saving animals here and now, from Whooping Cranes to California Condors, we’re little by little starting to understand just how complex each species is. The time to protect species is before they disappear. Regardless of DNA, extinction of living, breathing, wild creatures really is forever.
Laura Erickson at 3:55 PM
Share
‹
›
Home
View web version