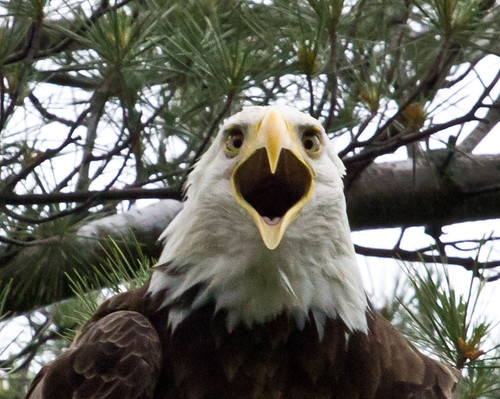 I often wonder about the burden we place on animals when we make them symbols. Thomas Jefferson and John Adams wanted a macho symbol of America when they were designing the national emblem, and chose the Bald Eagle. Ben Franklin disapproved of the choice, claiming the eagle was “a rank coward.”

Franklin's general crankiness with regard to eagles may have been over the top, but he was absolutely right that few raptors, including Bald Eagles, have ever been useful in wartime. Birds of prey may have an image of bravery and machismo, but they'd hardly be helpful in the thick of battle. A falcon does serve as the mascot for the US Air Force Academy’s cadet wing.  The tradition began in 1955 with a Peregrine Falcon named Mach 1. The Academy built some mews and have maintained from 10 to 15 falcons of a few species ever since—mostly Prairie Falcons, but also white Gyrfalcons. Every year four new cadets are selected to learn falconry, replacing the four graduating falconers. The team of twelve cadets is responsible for the care of all the falcons and for training the Peregrine and Prairie Falcons to perform in flying demonstrations.

The falcons kept at the Air Force Academy are bred in captivity, and provide a source of birds for the Academy, for other falconers, and for reintroduction projects. But they're never used in actual missions. Despite the speed, ferociousness, and intelligence of birds of prey, they simply can't help us win wars except by stirring up feelings of power and might. Unwittingly, they’re pretty much like the politicians we call hawks, who stir up the masses to get support for a war, but don’t themselves serve.

Ironically, doves have served in the military and actually seen combat. They’ve been wounded in action and honored as heroes for their bravery under fire. One of the most famous of these pigeon heroes was Cher Ami, a male donated to the US Army Signal Corps by British pigeon fanciers. He flew 11 missions during World War I before his final battle, during the Battle of the Argonne in France.

On October 3, 1918, more than 500 men of the 77th Infantry Division were trapped in a small depression on the side of a hill, surrounded by enemy soldiers. Their commander sent out several pigeons telling his commanders where they were and how bad the trap was, but one by one, the Germans shot them down. The next day, most of the men had been killed and only one pigeon remained—Cher Ami.

In the afternoon the American Artillery started firing at the Germans, and not knowing where the 77th was, they started dropping shells on them, too. The commander wrote a note: "We are along the road parallel to 276.4. Our own artillery is dropping a barrage directly on us. For heaven's sake, stop it." He attached the message to Cher Ami’s leg and released him. Instantly the Germans started shooting at the little bird, blinding him in one eye, and tearing a hole in his breastbone the size of a quarter. Yet Cher Ami kept flying, higher and higher, until he was out of reach. He flew 25 miles in 25 minutes to his coop and collapsed. The soldier who picked him up saw that one leg had been all but severed—attached by only a few tendons. Somehow that leg had become wedged into the hole in the bird’s breast, the tiny canister with the message still attached. Two hundred American soldiers were saved. They managed to save Cher Ami's life, too. The crippled bird was tenderly nurtured for almost a year before finally succumbing.

Doves don’t fight—when they’re carrying messages, they’re merely returning to their home coop. They value home and hearth, and just want to be left in peace. No one would ever use a pigeon as a symbol to get people fired up to wage a war in the first place.

So ironically, hawks are the birds most likely to promote war while not risking their own lives, while doves, living up to being a symbol of peace, would just as soon avoid war altogether. Yet doves are the ones with the strength and courage to do what needs to be done to actually save the day.
Laura Erickson at 7:58 AM
Share
‹
›
Home
View web version