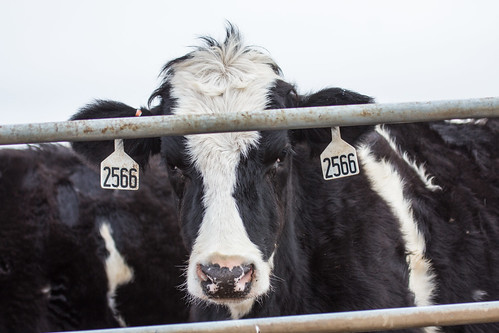 I spent 2013 doing what I called my Conservation Big Year, trying to find as many species as I could in the Lower 48. I found myself in a great many grasslands over the continent, searching for birds from prairie chickens and sage grouse to sparrows and plovers. At the end of April in Kansas, I watched one lone male Greater Prairie-Chicken displaying on his lek. No females had been recorded all season, and the only other male on the lek had been killed by a predator the week before. 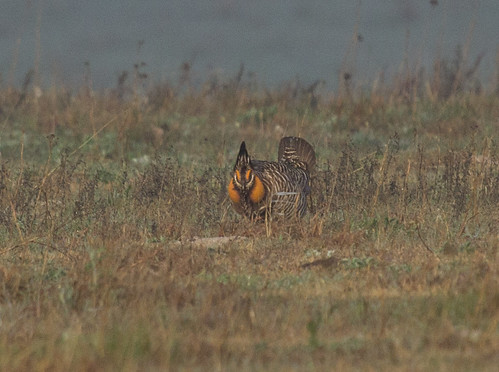 It was cosmically depressing to watch this plucky bird, dancing and booming for over 3 hours without a break, with no hope at all of attracting a mate. That area of Kansas was suffering a crippling drought, and as parched as the landscape was, there were lots of herds of cattle degrading what was left of the sparse vegetation.  All year I was seeing critical habitat destroyed by grazing, until in July I reached my breaking point. Just like that, I stopped eating beef for good.

Over a decade ago, I found myself driving behind a cattle truck for a 50 mile stretch along I-80 in Nebraska, and one cow stared directly into my eyes the whole time. That was enough to make me stop eating beef for a while. But this time I’m committed. I’ve honored my vow except in two or three awkward situations when I'd have felt bad turning down a special meal someone had prepared. I never did eat much meat, so giving up beef hasn’t been a sacrifice. In many ways it literally was the least I could do, but I had to make some kind of gesture to acknowledge how much birds like that lonely prairie-chicken are suffering as the planet tries to accommodate to our ever swelling human population.

My personal issues of not eating beef go beyond the ecological damage that cattle grazing causes. Cows trigger empathy in me. I was never been able to look a cow in the eyes since I went back to eating beef after quitting the one time. But now my conscience is clean. And in December, looking a cow in the eyes made a tangible difference for my final Big Year total.

I spent December 18 at Point Reyes National Seashore in California. According to eBird, there were supposed to be some Pacific Golden-Plovers in the field at a particular mile marker on one road in the park. I stopped by there three times. A man from Boston had parked himself there at mid-morning, and stayed for several hours, scanning the field and the skies and listening for calls. The first two times I stopped, I joined him for a few minutes before heading on to other places, but when I got there around 2:15, he was giving up. After he drove off in discouragement, I walked along the road a bit. A group of cows were out in the field, and suddenly a pretty black-and-white one with large ear tags started walking toward me. When she reached the fence, she mooed softly but insistently, giving me a long hard stare, so of course I had to walk up to her and pet her forehead and the itchy areas around her ear tags. They bore the number 2566. It seemed ironic for me to be making such a personal connection with her when the people who controlled her destiny had marked her with such impersonal numbers. She and I were both enjoying the interchange, and suddenly, as I stroked her, a couple of Pacific Golden-Plovers called from the distance, flew up from the field, and flew directly over the two of us. It was the only time I saw Pacific Golden-Plovers all year, and I would not have seen them at all if not for that cow.  It brought to mind Robert Frost’s lovely poem, “Two Look at Two,” which ends:

Two had seen two, whichever side you spoke from.
'This must be all.' It was all. Still they stood,
A great wave from it going over them,
As if the earth in one unlooked-for favour
Had made them certain earth returned their love.
Laura Erickson at 7:38 AM
Share
‹
›
Home
View web version