A new little family and a scary threat to their survival 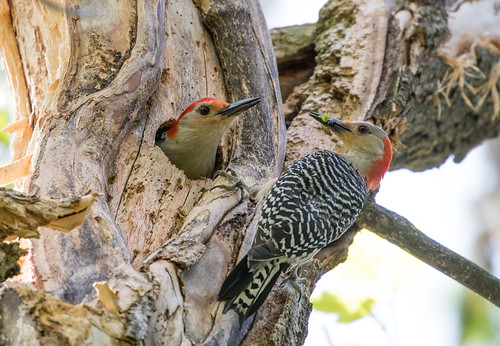 Last fall on September 7, when I was taking photos of my dog Pip and the birds at my birdbath, I noticed some Red-bellied Woodpeckers in my yard and my neighbors’. They were here and there, hard to track in the foliage, but I saw at least one adult and at least two young birds, and managed to get pictures of one young one.

This seemed reasonably good evidence that Red-bellied Woodpeckers had nested somewhere nearby, but I had no idea where. St. Louis County has two records of Red-bellieds nesting: one from 2009, when in July Mike Hendrickson watched fledged young being fed by adults in the Morgan Park neighborhood of Duluth, and in 2012, when someone in my own neighborhood reported to Jan and Larry Kraemer that they’d seen a juvenile at their feeders. The young birds I saw last fall add a probable third record.

This spring, I’ve been seeing both an adult female and at least two different adult males in my yard. I could tell the males were different because one of them had a slightly deformed bill. On May 26, the day before I went to Maine for a few weeks, I discovered that a pair was working on a cavity. This was thrilling, because as far as I can tell, this is the first actual Red-bellied Woodpecker nest ever discovered in St. Louis County. 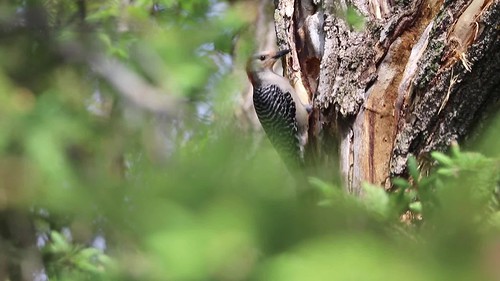 I was eager to find out what they’d be up to when I returned June 15, and there they were, bringing small insects in their beaks to the nest, apparently feeding young already. 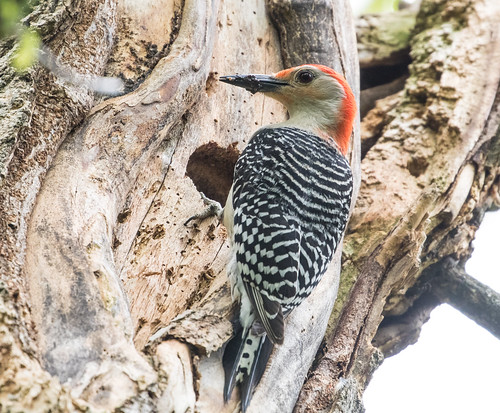 Red-bellied Woodpeckers take up to a week to produce 2-6 eggs, which they then incubate for 12 days. So the eggs had probably hatched no more than a day or two before I returned home. Baby woodpeckers are exceptional in two ways. The eggs hatch when the young are much less developed than most birds—very tiny, poorly formed, and absolutely naked. And the babies won’t make even the slightest attempt to fledge until they are ready—that first flight is a surprisingly strong one. So nestling Red-bellieds remain in the nest for 24–27 days, and with luck I’ll have at least 3 weeks of viewing enjoyment before they fledge.

Unfortunately, luck is going to be pretty essential. The powerful storm that hit the Northland on Sunday mostly missed my neighborhood, but we did have strong winds. Right at bedtime, I heard a loud "Crack!," but didn’t think anything of it until Monday morning when I saw that a huge limb of the nest tree had split off, right at the fork where the nest is. 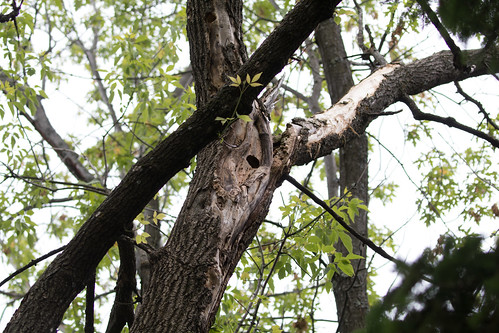 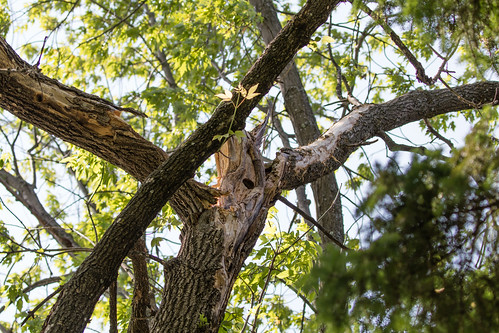 Without a cherry picker, there’s no way I can get any vantage point to look from above to see if the torn wood at the split breached the walls of the nest cavity or not. I was in a panic for 10 minutes or so until the male stuck his head out the entrance hole. Then the female returned with food, the male flew off and a few minutes later he returned with food, too. 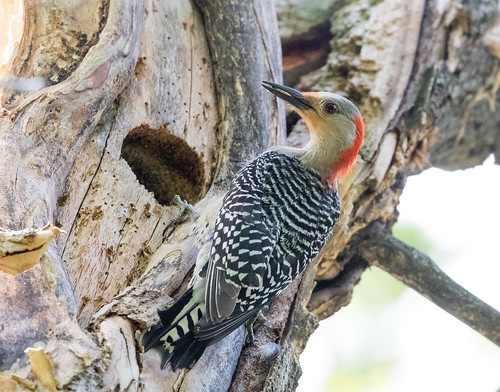 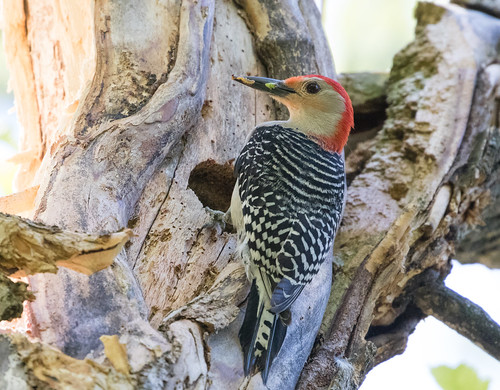 I can’t wait until the tiny chicks have grown enough that they’re climbing the walls and sticking their little heads out the entrance hole. I’ll be doing my best to photograph the nest every day or two—I even ordered an extender for my camera lens to get closer photos. As long as my trusty old rotten tree holds together for another three weeks or so, my dear little family should thrive. 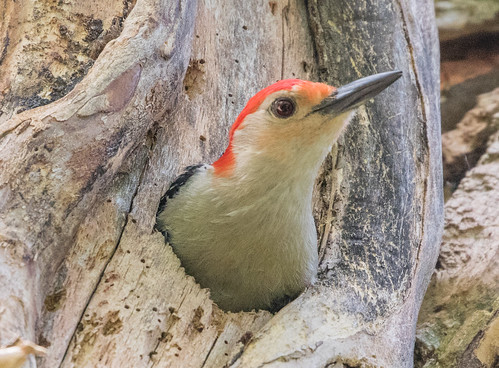