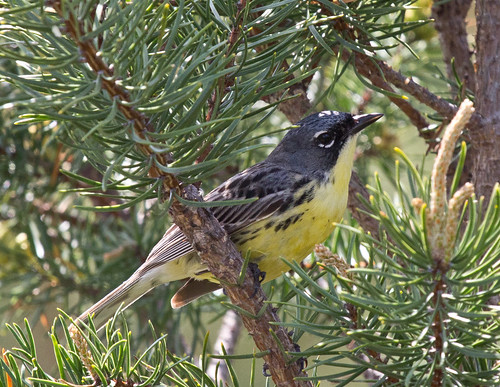 In the movie When Harry Met Sally, Sally Albright orders a piece of pie in a restaurant saying, “I'd like the pie heated and I don't want the ice cream on top, I want it on the side, and I'd like strawberry instead of vanilla if you have it, if not then no ice cream just whipped cream but only if it's real; if it's out of the can then nothing.” The waitress asks, “Not even the pie?” and Sally responds, “No, I want the pie, but then not heated.”

In the movie, that particular brand of fussiness is part of what endears Sally to us. We humans are a varied lot, from people who just grab a chunk of pie into their hand and gobble it down to people who are very particular about every little element of their food.

Kirtland’s Warbler is rather the Sally Albright of the bird world. It nests in areas of pine, but not just any pine—Kirtland’s Warbler must have jack pines, and want them in stands over 80 acres in size. The jack pines must be growing on well-drained soil, and not just any well-drained soil—the birds want what’s called Grayling sand, which has very low humus content so water percolates right through and the nests don’t get flooded. And Kirtland’s Warblers won’t accept just any old jack pines—the trees must be no younger than about 5 years old, and no older than about 20 years old. The warblers nest on the ground beneath the pines, and need for the trees to be large enough for their bottom branches to provide protection, and stop using the trees altogether when they’ve lost their lower branches. Ideal habitat for them was historically found within a large swath of the northern part of Michigan’s Lower Peninsula.

Kirtland’s Warbler was first described for ornithology in 1851, when a migrant was collected outside Cleveland, Ohio. One wintering in the Bahamas was shot in 1879. But ornithologists didn’t discover the actual breeding grounds in Michigan until 1903, in Osceola County. The big, beautiful warbler with the loud voice attracted a lot of research, but not a single nest was found farther than 60 miles from that first nest until 1996. 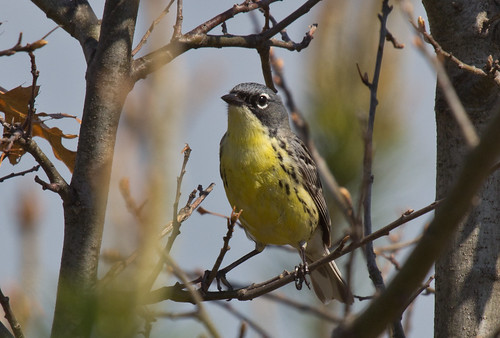 That precise habitat is rather forbidding for us humans—the low nutrient content of Grayling sand makes it inappropriate for agriculture and for manicured lawns both. There had always been plenty of jack pines the right age in that area of Michigan, where forest fires occurred rather frequently due to the dry conditions. Jack pine cones don’t open to release their seeds until they’re exposed to the extreme heat of fires, so they’re among the very first plants to pop up after a forest fire. Unfortunately, decades of forest management that included fire suppression severely limited new growth of jack pines, and by 1975, there were slightly fewer than 200 singing males. Michigan designated the Kirtland’s Warbler the “Bicentennial Bird.” Researchers covering the species entire range managed to find just about exactly 200 singing males that year. Only 167 singing males were found in the census at the low point in 1987. Kirtland’s Warbler was our rarest endangered songbird except for Bachman’s Warbler, which is now extinct.

Thanks to the Endangered Species Act, foresters started managing Michigan’s jack pine forests for Kirtland’s Warblers, using fire as the primary tool to endure that there were plenty of jack pines the right age. Unfortunately and tragically, a fire in 1980 went out of control, destroying 40 homes and killing a young Forest Service worker. The burn obviously had to change some of our approaches to management in the area, but by the late 80s, that burned over area provided so much appropriate habitat that, combined with Brown-headed Cowbird removal, the Kirtland’s Warbler population started growing. In 1993, the census found 485 birds, more than double the low of six years earlier, and now the population includes over 2,000 pairs—so many that some had to spill out beyond the species’ original narrow range to claim any territory at all. Now we have a few nesting pairs in the Upper Peninsula of Michigan, Ontario, and Wisconsin.

Kirtland’s Warbler was doing just fine despite its fussy ways until we humans started suppressing fires and destroyed the tight relationship between Brown-headed Cowbirds and bison. Fortunately, this lovely bird with its cheerful song is as endearing as Meg Ryan’s Sally, giving us humans plenty of incentive to act as the species’ own Harry. As long as we can ensure the continuation of appropriate habitat for Kirtland’s Warblers and make sure cowbirds don’t wipe out their reproduction, the Sally Albright of the bird world should continue to thrive, thanks to the Endangered Species Act.