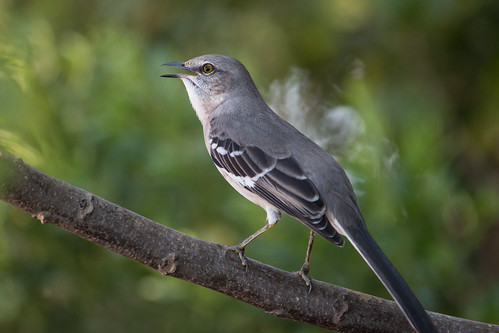 Ornithologists have long maintained that Northern Mockingbirds are continual learners, adding new imitations to their songs year after year. The assumption has been that imitations of different sounds indicate the breadth of experiences a male has lived through, and that female mockingbirds are drawn to the most experienced males.

The American Ornithologists’ Union and Cornell Lab of Ornithology’s Birds of North Americamockingbird account, revised and updated in 2011, states, “A male’s repertoire often contains more than 150 distinct song types which change during its adult life and may increase in number with age.” The account emphasizes that individuals learn new sounds throughout life, citing several studies, and cites both Don Kroodsma (one of my ornithological heroes) and another researcher who listed four different types of evidence consistent with song learning in mockingbirds: “(1) vocal imitation in the laboratory of conspecific, heterospecific, and nonavian sounds, (2) interspecific vocal imitation in free-living birds, (3) conspecific vocal imitation among free-living birds, and (4) abnormal vocal development under acoustic deprivation in the laboratory.”

The Birds of North America also mentions that

The male mockingbird’s many different vocalizations, indicating all the things he has experienced over his lifetime, are what win him a mate, which is why I have often characterized the mockingbird as the Othello of the bird world—Desdemona fell in love with Othello for his story-telling about his adventures. 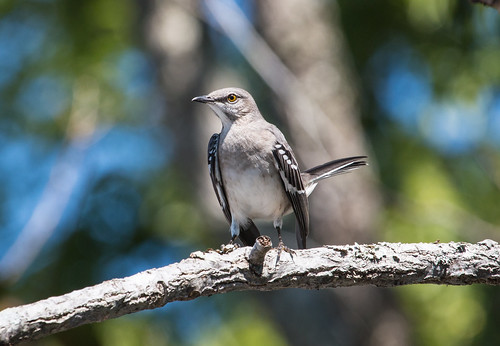 Now a recent study is questioning whether mockingbirds really do keep learning new songs throughout life. I find myself in the uncomfortable position of questioning that recent study, which was summarized on Cornell’s All About Birds website. So far I haven’t been able to find the original paper, but I did find some papers by the scientist, Dave Gammon of North Carolina’s Elon University. He’s made one very interesting finding:

Mockingbirds mimic birds whose songs are similar in pitch and rhythm to their own vocalizations. "When a Tufted Titmouse sings, it already sounds similar to something a mockingbird would sing," Gammon said. The Mourning Dove is too low and slow, and the Chipping Sparrow is too high and fast.

That fills an important gap in our understanding of what species mockingbirds are likely to mimic.

But then Gammon’s research gets a little dicey, unless there’s more to it than the article notes. For six months, he broadcast eight novel songs from four outdoor speakers on campus for two hours a day. Half were recordings of birds that don’t live in North Carolina and half were computer generated. More importantly, two of the exotic bird songs and two of the computer-generated songs were similar in pitch and rhythm to mockingbird-specific vocalizations. Gammon expected that the campus mockingbirds would imitate the real and computer-generated songs similar to theirs, but not the ones that were dissimilar.

In fact, they didn’t imitate any of the songs. Gammon combed through hours of recordings from 15 adult banded mockingbirds from that year and several years afterward and found not a single imitation of any of the new songs, though on two occasions he did hear a Brown Thrasher of unknown age mimicking one of the new songs. But it sounds like no mockingbirds at all picked up the new sounds, including young ones.

I don’t know if this was because the sounds came from loudspeakers rather than actual natural events or what, but I don’t think his conclusion that older birds don't acquire new songs is supported, and for now I can continue to believe that at least some mockingbirds may indeed keep learning songs as they get older. But I'll keep looking for the original paper in case I'm wrong.
Laura Erickson at 7:29 PM
Share
‹
›
Home
View web version