Requiem for a Beloved Tree 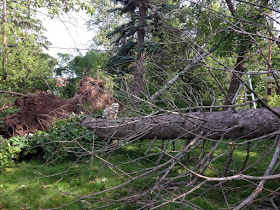 In 1918 or so, a young soldier was killed in World War I. His little brother, living in my neighborhood, planted several spruce trees as a living memorial. In 1981, when I was walking down Peabody Street hoping to find a house for sale, I fell in love with one of those trees. I had no idea of its history or anything—I simply fell in love with its magnificence, towering over the neighborhood. It was in the backyard of a little house with a for sale sign, so 35 years later, here we are.

That tree’s sheltering branches have held all manner of birds, from owls to crossbills. My children ran around the trunk. I gazed at it from my home office window. It’s been a solid presence in my daily life for 35 years.

And then in a heartbeat, or, rather, a 90-mile-per-hour gust of wind, the tree crashed to the ground, uprooted. The storm at 3:30 am Thursday caused a huge swath of damage throughout much of Duluth, leaving over a third of the city without power. I’m writing this on Sunday, Day Four of the disaster, and we’re still without electricity. Minnesota Power said power might not be back in my neighborhood, part of the “epicenter,” until late Thursday, over a week after the storm. They’ve brought in crews from as far as Missouri, but the disaster is more widespread than anything they’ve dealt with before.

The spruce fell from northwest to southeast, diagonally, filling much of the backyard. It fell directly on the power line—there was no way it could have missed that—yet missed the house and even my bird feeders. I like to think that in a final act of courage, the tree fell that way on purpose.

We’re going to use the bottommost section of trunk to make a solid little table for me, and I want to keep the very top branches. I’m not surprised at how bereaved I feel—when we were little girls, my sister and I used to skip around the two elm trees in our yard outside Chicago. One “belonged” to her, one to me. Hers developed Dutch elm disease and had to be removed, and then mine was struck by lightning the same summer. Our front yard was never the same again.

The sixth grade boy next door was devastated that a tree across the street crashed down in the storm. He remembers putting his arms around the tree when he was little, and it’s provided an important hiding place for him when playing Nerf Wars with his best friend. He told me that a lot of people think trees are just trees, but “people like us know better.” That’s the thing about storms—they take us out of ourselves and bring people together, whether to help each other or to grieve together.

This power outage is helping me notice which energy uses I don’t miss and which are vital. Temps reached 93 here on Thursday and 96 on Friday. It wasn’t as horrible as it could have been—we’ve never had air conditioning, and have always been good at cooling down the place at night and closing it up tight in the morning. But our stove is electric and our on-demand gas water heater works with an electric operating system. We’ve been buying a couple of large blocks of ice every day, but this has gone on too long and most of the food in our fridge and freezer is no longer salvageable.

I’m doing just fine without TV and am using my phone for an internet hotspot, but no TV is such a loss for my 97-year-old mother-in-law who has short-term memory problems, so keeps forgetting why she can’t watch Jeopardy, Wheel of Fortune, or our evening lineup. One morning she prepared her coffee with cold water—the poor thing couldn’t understand why the coffee was cold and tasted horrible and was shocked all over again when I told her we were having a power outage so the kettle doesn’t work. I’m grateful she’s not on a c-pap or other electrically run support system, but many people are.

A few of my friends who live in the country boast about how they’re “off the grid” even as they depend on backup generators and wood burning stoves that are far, far less energy efficient and more polluting per kilowatt produced than electricity produced by the power company, and contribute to climate change just as badly. Somehow we need to face these problems together, as a community, all of us recognizing our dependence on some kind of energy and how we personally contribute to the problems and must be part of the solution. But right now I’m yearning for an ice cold drink and mourning my tree. I’ll think about solving the world’s problems tomorrow. 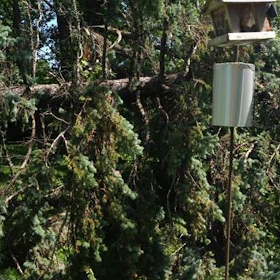