Canaries in the Coal Mine 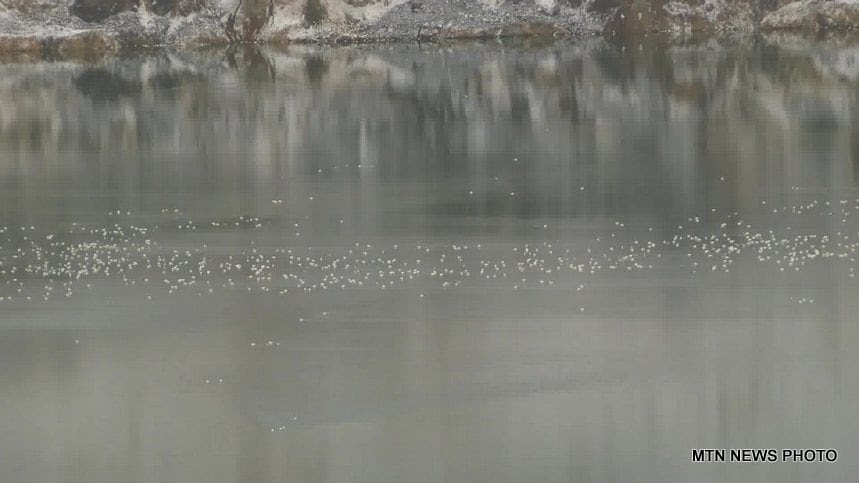 Imagine a group of miners going deep deep down into a mine, and suddenly the canaries they brought with them keel over dead. Would any of them reasonably respond by saying, “Well, that’s too bad, but there are plenty more where they came from,” and keep pulling their crew deeper into the mine?

After stories emerged on Facebook about thousands of Snow Geese dying after landing in the Berkeley Pit in Montana last week, that was pretty much the exact take of some reasonably educated people. Commenters said things like “at least it wasn’t a rare species” and even “that’s a good way to bring down their numbers.”

The Snow Goose, a gorgeous species that migrates through the Lake Superior area in fairly small numbers, is far, far more abundant on a continental scale than it may seem to Northlanders. Not only is it rather rare in these parts at any time of year; it breeds nowhere in the Lower 48, nor in much of Canada. How can it be so abundant?

On the breeding grounds north of the tree line in Greenland, Canada, Alaska, and the northeastern tip of Siberia, Snow Geese can be incredibly dense. Their main wintering grounds are within a swath of land from Iowa and western Illinois down to Louisiana and Alabama, but a large number winter here and there. In New Mexico they’re easily photographed and enjoyed at the Bosque del Apache National Wildlife Refuge. Their migration peaks in Nebraska along the Platte River in early March, when it’s possible to see a million in a single day.

So yes, Snow Geese are abundant, especially considering that in the 1800s they’d been over-hunted to the point that they were in serious trouble. Now, after a century of protection, some wildlife managers say that Snow Geese have become dangerously “overabundant,” and are destroying the tundra. Their information is based on aerial surveys that do show large and increasing numbers, but since there is no baseline from before their population had been decimated, their assessment is absurdly unscientific. And if real damage to the tundra is occurring, that may well be caused by effects of climate change, which is accelerating worst in the far north.

Either way, we honestly have no clue how big today’s Snow Goose population is compared to that of 200 years ago. We also don’t have a clear picture of tundra vegetation from 200 years ago, and we don’t know what factors besides Snow Geese may be affecting it.

But overpopulated or not, the thousands of dead Snow Geese are definite proof of the danger of the Berkeley Pit, a shockingly toxic superfund site in the heart of Montana, the state of Ryan Zinke, Donald Trump’s proposed Secretary of the Interior. Earlier this year, Zinke expressed dismay when the EPA listed another Anaconda mine site as a Superfund priority. He didn’t dispute the toxicity. His concern was that Superfund designation could make people aware of how toxic the site is, saying on his Congressional website, “That stigma remains. It draws down property values and hinders investment and future economic development.”

News reports about the unprecedented Snow Goose kill mentioned how people in the Butte area are concerned about the potential impact the national news story will have on tourism there. Believe it or not, despite this pit being a Superfund site, one of the big tourism draws in Butte, with a Chamber of Commerce website encouraging visitors, is a platform to look at the pit.

According to an article cited in Snopes.com as accurate,


Dave Palmer, who takes office in January as the newly elected county chief executive and a longtime commissioner, said the die-off is not good news on the economic development front. “It does make national news and that is unfortunate because that is what people look at — bad things," Palmer said. "We could be doing a thousand good things in Montana and Butte itself and you never hear about them rise to the national level."

Now many locals are saying the pit should be “drained,” though where exactly they want all that toxic water to go isn’t clear, especially in an area that is already plagued with contaminated ground water from other Superfund sites.

Most of the news stories back when it happened through December 7 set the Snow Goose kill at “thousands” or “close to 10,000,” but final numbers haven’t been released yet. With so many other scary stories dominating the news right now, few people are even thinking about this story anymore. The Butte Chamber of Commerce and all kinds of corporate interests have a vested interest in suppressing coverage, so we may never find out what that final tally is. Yet here we are, continuing down that path even as dead canaries accumulate. There are plenty more where they came from, right?
Laura Erickson at 6:42 AM
Share