Duluth Audubon's Spring Warbler Walks are in full swing right now, even if migration is not. The temperature is a bit above average for early April, but it seemed downright frigid at Park Point on Thursday morning, and our species total was lower than I'd expected: we saw only 15 species, compared to the 27 we'd had at the Western Waterfront Trail on Tuesday. I wasn't surprised that we didn't see any warblers or kinglets yet, but was rather shocked at the low turnout of ducks. Indeed, we had more than twice as many human participants as ducks—just five Common Mergansers, even though we thoroughly and repeatedly scanned the water on the bay side and briefly braved the bitter wind to check out the lake side. No Killdeer or other shorebirds were seen, either.

Our looks at those Common Mergansers were very brief but excellent as a learning opportunity. Common Mergansers are very often mistaken for loons while swimming or flying, and today we got clear looks of them doing both. As if wanting to help cement the lessons, one helpful loon flew past and another swam in the bay for us. Everyone got to see how the long, low-slung silhouettes in the water are quite similar, but that the mergansers have all while sides and a narrower, bright red bill; the checkered back on a swimming loon extends down the sides, and the bill is sturdier and all black. In flight, the loon's front and back ends seem more evenly balanced—the merganser's feet don't extend behind as far. When you can see above, the merganser has white patches on the wings that the loon lacks. And the loon's wingbeats aren't anywhere near as rapid. When our mergansers dropped down into the water, they banked in perfect light for everyone to see their bright orange feet. That happened too fast to get photos.


When we first arrived, about 130 Ring-billed Gulls and 4 Herring Gulls were loafing on the ball field. Almost all of the gulls were breeding adults. Through my scope, people could clearly see the Herring Gulls' larger size, more massive, yellow bill that lacks the black ring, and pink legs and feet, compared with the Ring-billed Gulls' smaller size, somewhat daintier bill with the black ring, and yellow legs and feet. I like reminding people that if they can't remember which foot color goes with which species, to think of the phrase "red herring" to associate with the pink feet. Unfortunately, I neglected to take a photo of any gulls today.

Despite being in the open, the surrounding vegetation must have effectively blocked the wind close to the ground, because the gulls faced every which way. A young Bald Eagle flew in, causing pandemonium for the gulls, but it just alighted on the ground to give us fine views before it took off again.


Another young Bald Eagle alighted at the top of a spruce tree and gave us several minutes of confusion. I was pretty sure it was an eagle from the start because of its scruffy plumage and the fact that the bill seemed oversized for a hawk, but the apparent sizes of birds can be extremely misleading, and this one not only looked as small as a Red-tailed Hawk; it also managed to hold onto a pretty slim branch, so we spent a lot of time trying to decide which hawk it was until we finally decided that it really was an eagle. Even so, I studied the photos when I got home to verify the decision. It appears to be a second-year Bald Eagle. 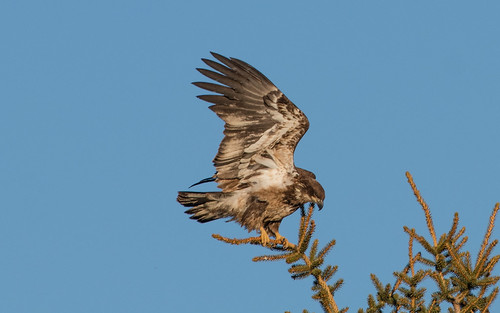 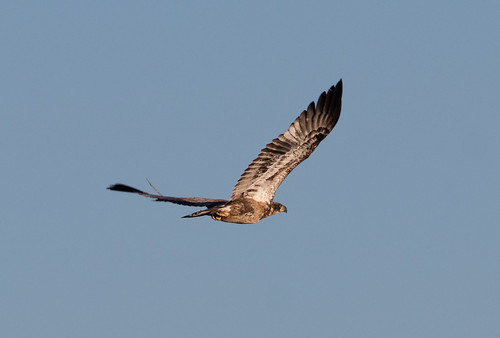 I like to start our warbler walks in early April, despite the low number of species. This is a great time to learn a few songs well, and everywhere along our walk at least one Song Sparrow was singing away, helping people key in on how it starts with two or three identical notes and then breaks into a jumble. Song Sparrows in different areas of the country, and even in different areas of a city, sing different dialects. But all the songs start with two or three identical notes before breaking into something else.


One of our most interesting sightings was of two birds that are both too common and cause problems for other species. A Brown-headed Cowbird and a European Starling sat side-by-side on the top of a spruce, and we could closely observe their differences: the long, narrow, yellow bill of the starling vs. the shorter, stouter, dark bill of the cowbird; the all-black, sleek body plumage of the cowbird vs. the somewhat flecked body plumage of the starling; and the starling's short, broad tail with chevrons where it meets the body vs. the longer, narrower, all-black tail of the cowbird.


As the weeks progress and we get more species, we won't devote as much time to the common ones as we could today.

I'll keep posting recaps and photos of the birds we see on these warbler walks my blog, where I also have information about how to join us on these free little activities, which have become such a treasured tradition of Duluth Audubon Society.