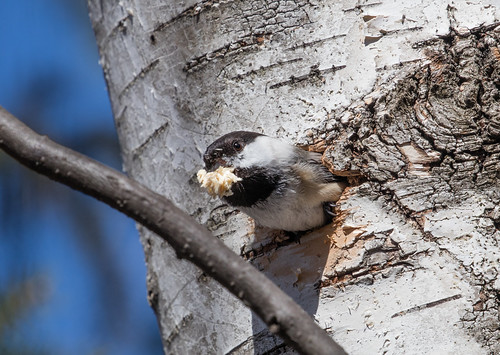 My friend and neighbor Jeanne Tonkin called me yesterday to tell me she had just noticed a pair of chickadees excavating a hole in a dead birch in her backyard.

Today I headed over to take some photos and video. The nest is in a perfect location for me to see what's happening, at least from the outside. The pair were busy excavating the inner chamber, taking turns flying into the hole, pecking around a bit, and flying out with a beakful of wood chips to spit out at a distance. They mostly ignored us, but I didn't want to disturb them for too long, so I stuck around for 10 minutes or so and headed home.

I'll stop by every day or two to record their progress. I'll know that they've finished digging out the inner cavity when instead of seeing them carrying out wood chips, I'll see them carrying in nesting materials, such as moss, lichens, and soft animal fur. As nest-building progresses, the parents will be engaging in plenty of courting behaviors, and will be mating several times a day in the week or so before the female lays her first egg.

Her body will start ovulating about once a day as the nest reaches completion. Inside her body, her single functional ovary looks like a microscopic cluster of grapes. The next ovum to be ovulated will look relatively enormous, and when she's in full egg production, the following two ova will be pretty oversized as well. Each ripe ovum is an entire yolk, the single cell that, when fertilized, becomes a baby chickadee.

Sperm from the male must swim up to near the top of the female's oviduct, or egg tract, before she ovulates, because as the ovum descends, the oviduct starts secreting the proteins that will surround it as the albumen, or egg white—sperm can't work their way through that. Further down, the oviduct will secrete the calcium complex that will form the shell. The egg will reach the terminal end of the oviduct, a chamber called the cloaca, in the morning, and when the female senses pressure there, she hightails it to the nest to lay it.

The female lays one egg most mornings for a week or two. During that time, she and the male will mate a few times a day. She won't start incubating the eggs until she's laid the full clutch—the eggs will stay at air temperature so the chicks won't start developing until they are warmed by their mother. She sleeps in the nest with the eggs, but until she starts incubating, she'll sit above them, not trying to keep them warm.

It's going to be impossible for me to tell even momentarily which chickadee is the male or female. If I could hold them in my hand and blow on their tummy feathers, I'd be able to tell them apart. The down feathers on the female's belly start falling out so when she parts her outer belly feathers, she can expose her huge brood patch. During incubation, this skin is the hottest part of her body—108 degrees or so. Her brood patch is large enough to cover even the largest chickadee clutch.


The testes of male birds are internal; avian sperm can remain viable at their high body temperature, both when the male produces it and while it's stored in the female's oviduct. Pairs mate frequently during egg production—as each egg descends down the oviduct, it can push out some of the stored sperm, so the more often birds mate, the more likely some sperm will be present at the top of the oviduct each time the female ovulates.

Male chickadees don't have a penis. Both sexes have a cloaca—the chamber where the urinary, digestive, and reproductive systems all empty. To mate, the male and female bring together their cloacas in what ornithologists romantically call the cloacal kiss. The male does have what's called a "cloacal protuberance" that, when engaged in the act of mating, opens and widens to seal the passage between his and her cloacas.


If everything works the way it should, sometime in May I'll start seeing the chickadee parents carrying food into the nest. They'll be feeding anywhere from 1 to 13 tiny little chickadees--most clutches seem to have 8 or 9 eggs, but there won't be a safe way for us to count these. At each feeding the babies will need to poop almost as soon as they swallow food, conveniently while the parent who brought the food is still present. So the parent can grab the poop, encased in a sturdy membrane called a fecal sac, and carry it away to keep the nest clean.


When a nest is safe and not disturbed, the nestlings will remain securely inside it for about 16 days. It's important for people to leave nests alone after the chicks start to feather out; if they are frightened by anything, they sometimes fledge prematurely—when they're as young as 12 days old. They can survive out of the nest at that age, but their chances are much better the later they fledge. Because we won't know exactly what day the eggs hatch, we'll have to guess when the babies should fledge.

In 2015, Jeanne found a chickadee nest in a cherry tree. I didn't know about it until the day before the babies fledged. I'm presuming they'd stayed in the nest the full 16 days, because only a few baby down feathers were evident through their plumage.


After the babies fledge, they are impossible for a mere human to keep track of. They follow their parents endlessly, constantly begging for food as they develop life skills that will help them survive independence. By now the young chickadees, in perfect new plumage, look gorgeous; their poor parents, who have been run ragged for months, look terribly bedraggled. They'll molt into new feathers not long after the young are on their own.


When the baby chickadees have figured out how to negotiate the big world, they go their separate ways, each joining a different social/winter flock. The adults won't nest a second time. Over the winter, the young ones will each select a mate within their new flock; by joining different flocks, they don't have to worry about accidentally selecting a sibling or parent as a mate. Come next spring, some of those eggs I'm just speculating about will have produced adults starting nests of their own. It'll be thrilling for me to keep track of Jeanne's chickadees through the entire wondrous adventure. 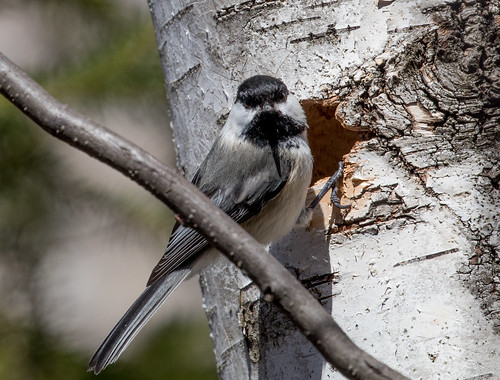