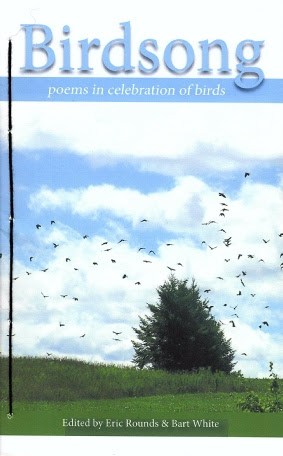 April is National Poetry Month, and this year I’m celebrating with a lovely new book I just received, Birdsong: poems in celebration of birds, edited by Eric Rounds and Bart White, and published by FootHills Publishing, Kanona, New York.

For an ornithologist, bird poetry can be a mixed bag of misidentifications, anthropomorphism, and subtle or obvious misinterpretations of bird behavior. Walt Whitman addressed that issue long ago, writing:


You must not know too much, or be too precise or scientific about birds and trees and flowers and water-craft; a certain free margin, and even vagueness—perhaps ignorance, credulity—helps your enjoyment of these things, and of the sentiment of feather’d, wooded, river, or marine Nature generally. I repeat it—don’t want to know too exactly, or the reasons why.

No human: neither scientist nor artist nor hunter nor animal rights activist—no one living in the heart of the city nor the depths of the wilderness—not one of us with our meager human brain can possibly grok the full meaning of any individual bird, much less a whole species, much less the whole class, much less the long, long reaches of avian evolution through time back beyond therapod dinosaurs. It’s the honest attempts at understanding that break into the innate darkness of our minds with tiny shards where light may pierce our consciousness.

The editors of Birdsong wrote lyrical prefaces to prepare us for the wide interpretations to be found in 104 original works by 79 different poets. I received my copy from Paulette Warren, who lives in Cotton, right within the Sax-Zim Bog, and listens to "For the Birds" on KUMD. She writes as P. A. Pashibin, and her poem in the book Birdsong, “Waiting for Fox,” was so powerful and evocative that I wanted to use it on the air, in her own voice. So she and I met at the station and Lisa Johnson recorded her.

I’d first corresponded with her back in December. She wrote:


One of your programs inspired a poem that was locally published by Cecilia Lieder’s Calyx Press:  “The murderous crows of London Road” was based on one of your programs — not a precisely factual account, but definitely a program that left it’s impression on me!

That program, about crows in my neighborhood learning how to convert living squirrels into roadkill by chasing them into the road right when a car was approaching, originally aired on June 9, 2006. P. A. Pashibin read that poem and a few others that I'll be linking on another blog post.

On the third Thursday of every month, Duluth’s coffee shop, Beaner's Central, has a Spoken Word Open Mic for area writers to share their work. In honor of National Poetry Week, tonight’s event will highlight a local group, Darn Good Readers, a newly forming group of writers and readers. The Darn Good Readers will be reading selections from Birdsong, as well as other selections celebrating birds, including more of P.A. Pashibin’s splendid work.