SO worth going out in the rain! 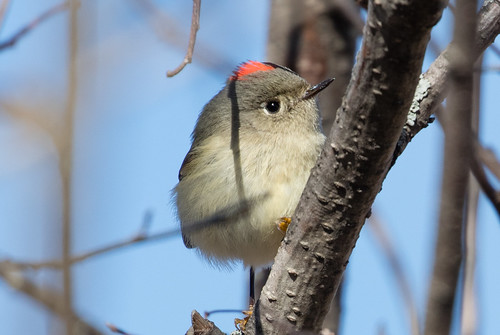 I got up at 4:50 this morning, ten minutes before my alarm was set to go off, still basking in the glow of the Cubs' 14-3 win last night. It was silent outside—the roaring wind of yesterday had calmed down—and at 4:59 my robin started singing. I was excited about the prospects for today's warbler walk until Debbie Downer my husband Russ told me it was raining, and turned on The Weather Channel. The radar map didn't look too bad—it looked like the rain might last for an hour or two at most, and the forecast was for drizzle, not actual rain. And any day in spring is probably going to reveal at least something new, so I figured what the heck and headed out. Driving to the Western Waterfront Trail in a steady drizzle, I wondered if anyone else would show up, and if a bird walk on such a crappy day would be worth it. But like the last game in last year's World Series, a bit of rain turned out to be a good thing. In both cases, having faith was justified.

It was still drizzling very lightly in the parking lot as our group assembled. Even a bit of water can be horrible for digital optics, and I cannot find my rain cover anywhere, so I had to leave Chandler, my trusty camera, in the car. It turned out to be a wise decision. We didn't have much rain at all, but enough that he could have been damaged. Unfortunately, that meant I lost opportunities for some really good shots, but oh, well. What is our mind's eye for but to remember lovely things we couldn't photograph? But that does mean we didn't get a single photo of any of the birds seen on our walk.

When we first started out, we heard chickadees and Song Sparrows. A robin was singing when I first arrived, but he'd shut up by the time others joined me. Our first exciting bird of the morning was a female Rusty Blackbird calling from a perch high in a tree near the footbridge. And when we got to the first point close to the marsh, a pair of Rusty Blackbirds were slowly working through the muck and wet leaves. I wish I'd had my camera right then, but at that point it was actually drizzling. As I always say, it's better to see Rusty Blackbirds without a camera than to not see them with a camera. We had one Swamp Sparrow in that first section of marsh, and a couple more further down the path. A few American Tree Sparrows are still lingering with lots of juncoes, but now White-throated Sparrows are jumping into the mix.

Ducks were few and far between. Greg Garmer brought his scope and picked out some distant ducks and grebes that I missed. (Too many close-range songbirds for me to focus on!) Numbers were low but we had pretty good diversity.

A wonderfully cooperative Hermit Thrush gave us all a thrill, as did a persistently singing Brown Thrasher. A Great Blue Heron who grabbed and gobbled down a big fish delighted us all.

As we worked our way beyond the marshes, we saw a Merlin lugging someone. He or she alighted a couple of times in tall trees, and then a crow flew in and chased the Merlin away. Neither of them vocalized at all as we watched this little drama.

We also saw another interpersonal drama: two Ring-billed Gulls going through cool courting behaviors and actually spending some time with the male atop the female, though if they actually copulated, we missed it. They probably waited for a moment when all those binoculars were trained on something in another direction.

Tree Swallows, Yellow-rumped Warblers, both kinglets (mostly Ruby-crowned), a Brown Creeper, and a pair of Eastern Phoebes gave the morning a wonderfully spring-like aura, and by 8:30 or so, the clouds were breaking up to give us moments of sunshine that may help sustain us as we face the ice storm forecast for tonight and tomorrow. By next week, things will be even better. That's spring.