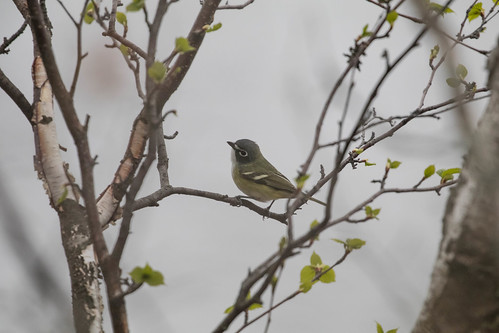 This morning started exactly the way the forecast said it would, with thick fog. So despite the fact that the forecast was also calling for rain around 8 am, I set out for my Tuesday Warbler Walk at the Western Waterfront Trail with high hopes.

Ever since Russ's and my first spring in Duluth in 1981, I’ve noticed that there are two kinds of days up here. Russ likes the MMMMMMMMs: the Magnificent Minnesota Mornings. Unfortunately, on those days Migration seems Mediocre. The days I love are the DDDDDDDs: the Dull, Dark, Dreary, Drizzly, Depressing, Damp Duluth Days that birders Delight in. In mid- to late-May, these weather patterns always seem to coincide with the best days, when a wonderful variety of warblers, vireos, thrushes, and flycatchers abound, with eye-popping hummingbirds, tanagers, Rose-breasted Grosbeaks, and orioles to provide bursts of color even through the fog. Today was definitely one of those DDDDDDDs.

With the wind, we didn’t hear many songs except the House Wrens who were pretty much singing non-stop from the parking lot (one close, one barely at the edge of my hearing range (thanks to Jeff for hearing that one!) when we arrived.

When we started walking, we almost immediately came upon a Veery giving its veer call—it flew out very briefly, and some of us got good looks. The dull, dim lighting didn’t help with tricky warblers—one backlit Orange-crowned Warbler didn’t want to show its undertail coverts and while we were puzzling over that, a Yellow Warbler suddenly took its place, making some of us doubt our own eyes until we cleared up that we were looking at two different birds.

The forecast kept our participant list down—there were only 11 of us—and the wind and cold seemed to keep the birds down, too. The dim light made photography tricky, and the only bird I even tried to get photos of was not cooperative, but I did manage a couple of terribly grainy, dull pictures of our Blue-headed Vireo. That’s usually the first vireo to turn up during migration, and sure enough, it was my first vireo of the year. 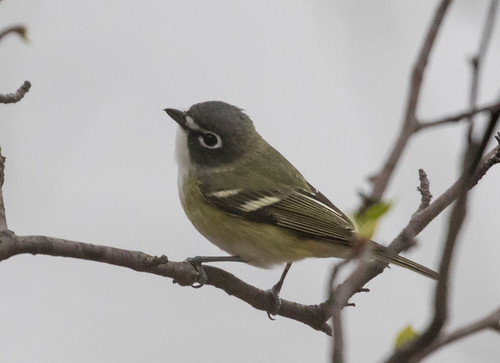 We saw a few warblers at the very start, but didn’t come onto our best little flock until right as the rain started—and it quickly showed that it meant business. Still, our six warbler species make this morning's warbler total the best we’ve done so far. The rain started right on schedule, so our walk lasted barely an hour. Our species list was only 28, but of them, 6 were new for our walks. We’d have had a good 20 additional species—maybe more—had the rain not sent us packing.

But the rain and fog, which lasted through the day, maintained the quality of the birding, even though temps in the 40s were a little lower than is pleasant in mid-May. When I got home to  my own yard, I had as many as 6 orioles at a time, a Brown Thrasher, and my first Least Flycatchers, Red-eyed Vireos, and Harris’s Sparrow of the year. Even my local birds were fun to watch—my pair of Red-bellied Woodpeckers and Pileateds have been spending time in the yard, and even in the dull light, I got a pretty nice closeup of the Pileated. 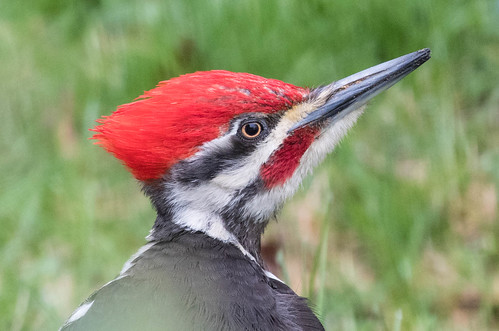 Meanwhile, John Richardson and several other local birders had great birds on Park Point today, including Whimbrels and both a Marbled and a Hudsonian Godwit. We’re going to be seeing more of the DDDDDDDs in coming days. May is a great month to be alive, and as far as birding goes, the worse the weather, the better.