Duck and Goose Nurseries or Crèches 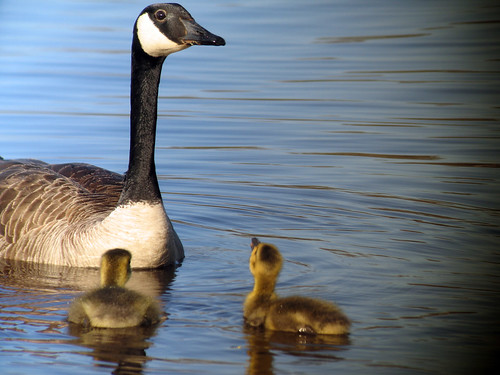 When I was living in Madison, Wisconsin, in the 1970s, I used to love seeing baby ducks. Ducklings are so cosmically innocent, their big, soft eyes looking out at the world with such open curiosity and trust. It’s logical that we’d find the tiniest baby ducks and geese appealing: as a mammal species wherein adults of both sexes instinctively protect dependent young for many years, and with our babies completely helpless for over a year, we instinctively respond with warmth to beings with large, open eyes and relatively oversized heads.

With my own eyes newly opened to the wonder of birds, how could I not thrill the one time I once witnessed baby Wood Ducks jumping, one by one, from their warm, secure nest high in a tree down to their mother, softly calling from the unknown depths. I saw them, one by one, their tiny legs and feet extended, tiny flippers for wings fluttering madly in that literal leap of faith all the way down to the hard ground below. Each one seemed as light as a marshmallow as it bounced on the ground, scrambled to its feet, and headed straight to its mother.

The first day or two after Wood Duck babies left the nest, the broods contained eight or ten tiny baby ducks, sometimes even a dozen. I could often find the same families day after day, but invariably, as the babies grew, I’d count fewer and fewer in each brood. I’d feel a visceral sorrow for the existence of foxes and raccoons, though ironically, the reason those hunters were so hell bent on raiding duck families was to raise their own little baby foxes and raccoons, which elicit the same tender feelings in us humans. 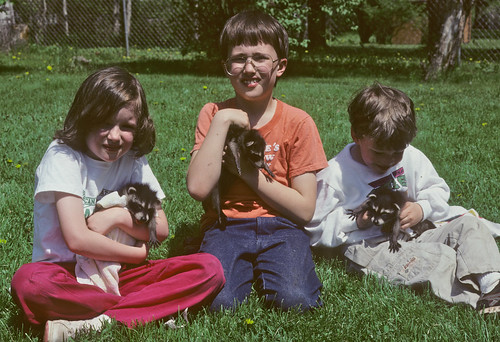 But having tender feelings toward specific baby ducks, I wasn’t much interested in taking that broad and sympathetic a view toward the animals that killed them. And as a warm-blooded mammal, I wasn’t the least bit sympathetic toward snapping turtles and large-mouthed fish. One morning as I watched a long line of tiny ducklings following their mother across a pond, the one I was specifically focused on through my binoculars was suddenly grabbed in the middle. Its tiny mouth opened in what had to be surprise and pain as it was jerked straight down into the water. Ever since that horrifying moment, I can’t see baby ducks without fear for them overshadowing my delight.

I hardly ever saw baby geese during the 1970s, which marked the very beginnings of when their population started mushrooming, but by the time we moved to Minnesota in 1981, baby geese were a regular, and now a too-common sight. Well, too common in the detached, long view of bird populations and how one over-populated species interacts with our own over-populated species. To my eyes, each individual tiny gosling is every bit as adorable as a baby duck. 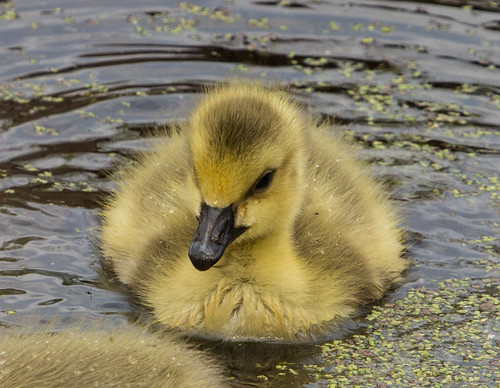 This year during our spring warbler walks, we started seeing baby geese in May. The first family groups we saw all included two adults, presumably the parents, and four to six tiny, fluffy goslings. 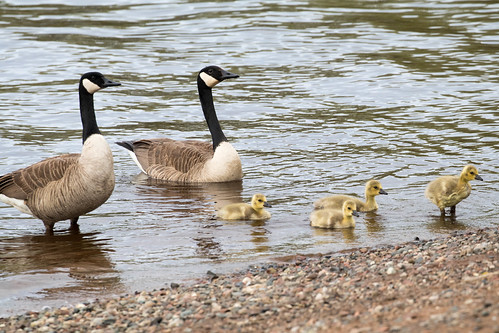 By the end of May, though, what looked like family units had grown dramatically, the goslings not just bigger in size, but much more numerous as well. One group at Park Point had over forty goslings attended by a single adult.

This is not evidence of super-fertile females or that predation has declined. No, the geese are doing what a lot of ducks, especially diving ducks, do, combining families into large broods of young, forming what are often called “nurseries” or “crèches.”

The very first time I saw Common Eiders, off the coast of Maine in 1993, I saw a single mother with at least 70 ducklings. I was shocked—I’d never seen anything like that before! That’s when I learned about ducks doing this. Female ducks are pretty depleted by the time their young hatch—they’ve used up vast resources to produce their large clutch of eggs, and incubating eggs is extremely energy intensive, too. Before their bodies are dense enough to dive well, the babies get their food in the shallows. When families combine resources, the mothers can take turns feeding in deeper water.


I’ve hardly ever seen dabbling ducks combine broods like this—the mothers can get plenty of food right where their ducklings are—but this happens a lot with mergansers. David Harrington of KBXE sent me an amazing photo of a female Common Merganser with 23 adorable ducklings, and generously gave me permission to post it.

When a mother diving duck doesn't have a nearby neighbor to share duties with, she will sometimes have to leave her ducklings unattended for brief periods.

Canada Geese are more and more forming crèches, too, probably to allow parents to take turns feeding and resting away from their broods. Like ducks, the youngest, tiniest geese are still seen in small family groups, but after a few days, the parents are ready for a few breaks. This keeps the young in the safest places, away from lurking predators that could never manage the huge adults, even as the adults go off to their favorite feeding places to rebuild their strength.

Watching how resourceful birds can be in ensuring the world has a continuing supply of baby birds is ever so much more lovely and pleasant than watching baby ducks disappear into the depths, never to be seen again.