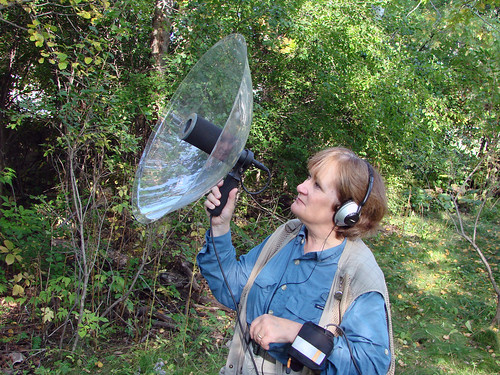 Right after my last program aired on KUMD, about my sound recordings, I got a couple of emails asking what recording equipment I use. I can't make fair endorsements or recommendations about sound equipment because I'm only familiar with what I use, so can't compare it with anything else available, but I can at least describe my own set up.

I started out on Christmas 2000 with a Sennheiser omnidirectional microphone and Telinga parabola system (pictured in the photo above). Parabolas magnify the sound they’re directed at while reducing other sounds, which is perfect when you want to get a clean recording of a single bird. But the recording doesn’t sound so good if you aren’t aimed precisely at the bird—that’s why parabolas are usually clear plastic, so you can see through them. The trick is that you need to be wearing headphones, and it’s impossible to gauge direction to find a tiny, often hidden bird when wearing headphones linked to a single microphone. It’s amazing when you’re moving the parabola around hoping to find the bird and suddenly there it is—the sound pops.

A couple of years after I got my parabolic system, I saved up the money to get a nice Sennheiser directional microphone, which is way more forgiving about where it’s pointed than a parabola is. 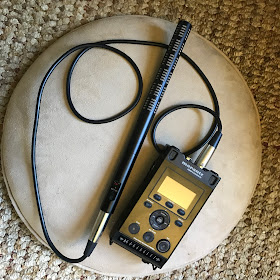 The problem with this mic is that, no matter what, it doesn’t amplify the call I want as my parabola does. But it captures the ambient sound better, doesn’t get hit by flies and mosquitoes with thuds, and is the simplest, easiest microphone to bring on trips. I started out with a small foam windscreen for this microphone. 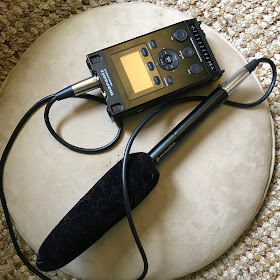 Last summer I bought one of those ridiculously fuzzy wind screens, which are more effective at screening out background noise, though they somewhat lower the volume of the sounds I want, too. 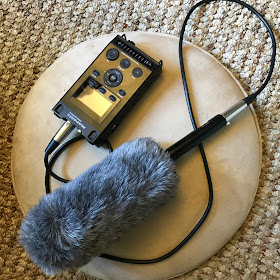 From the start, I recorded onto minidiscs except for a few days during the week in June 2001 when I took the Cornell Lab of Ornithology’s natural sound recording workshop and was expected to use a tape recorder for part of the session. Minidisc recorders had the great advantage of being wonderfully small—mine fit inside a perfect little wrist pack as pictured in the photo at the top of this post—and they didn’t have any of the hiss of audiotape. But minidiscs also had a problem—they compress the sound. The recordings sound wonderful to my ears, but some of the spectrograms don’t look like the spectrogram of the same sound recorded onto tape or uncompressed digital recorders. That’s because the digitally encoded audio signal onto a minidisc was data-compressed using the Adaptive TRansform Acoustic Coding formula also called ATRAC, which is what they call a 'psychoacoustic' data reduction system, omitting some of the content that is ostensibly inaudible to our ears anyway, to make a smaller file size. The Cornell Lab of Ornithology’s Macaulay Library of Natural Sounds needs what are called lossless recordings that haven’t been compressed at all.

The Lab got away from tape recorders as soon as lossless digital recorders became available. When I started working at the Cornell Lab of Ornithology, Greg Budney of the Macaulay Library of Natural Sounds helped me select a good Marantz digital recorder—which is what I usually use now, not only for natural recordings but also to create my radio program and podcast. This records sounds as uncompressed .wav files onto an SD card. To record my voice, I use a fairly inexpensive studio microphone, but for natural recordings of birds, I use the directional microphone or parabolic microphone, and for ambient nature sounds I use the omnidirectional mic. 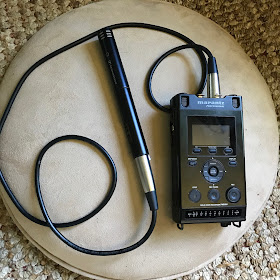 Last summer, in anticipation of my trips to Peru, Cuba, and Uganda, I bought a more portable little recorder made by Olympus. This was a disappointment—it works on a rechargeable battery, but the battery life is only a few hours, and it doesn’t record when connected to an external power source. It’s also not nearly as intuitive to use as the Marantz, and had I realized the battery issue, I’d not have bought it, though now that I’m stuck with it, I’m trying to make the best of it in some situations.

Every now and then, I hear an amazing sound when I don’t have any of my recording equipment. That’s when I pull out my smart phone and use the voice recorder app. The results are not as good as what I’d get with my professional equipment, but if I’m close enough to the bird, I can get some decent memories, like when I was on a field trip in the Little River National Wildlife Refuge in Idabel, Oklahoma and came upon a singing Swainson’s Warbler at close enough range to get this recording. Not bad for using a free app built into my phone. It may not be perfect, but what is?