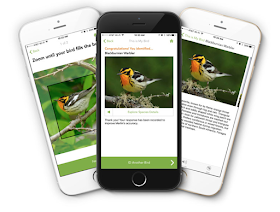 Back in the ‘90s, this radio program introduced Earth Angel Bird Identification Binoculars. “With the teenie-tiny microchip embedded in the binocular housing, these binoculars can compare your bird with plumage of every known species and identify it in 12 seconds flat.”
Two decades later in the real world, we have a real-life app that helps you identify a bird based on your answers to 5 simple questions, or based on a photo you took. The app, named Merlin, was developed by the Cornell Lab of Ornithology, and it's surprisingly accurate. I tested it a few years ago, when it wasn't quite up to snuff yet. For some photos, it didn’t give the correct identification as the first choice, and it got a few photos entirely wrong, but there was a better-than-even chance that it would get any individual photo right. Based on tests I made today, the accuracy has gone up dramatically.

For a photo ID, you can use your smartphone to photograph a picture you have on your computer or camera screen, or straight from the phone. Merlin cautions, “For best results, use a photo of the bird unobstructed by vegetation or other birds. Merlin will always suggest a possible ID, but if a person can’t see the bird in the photo well enough to tell what it is, it’s unlikely that Merlin can, either.”

I just tested Merlin on two photos of a Brown Thrasher on a lawn that a person sent me this morning. She wanted to know what it was, but said these photos were “lousy,” and taken through a window screen. 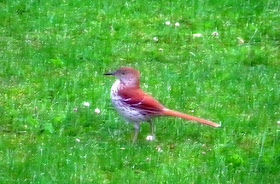 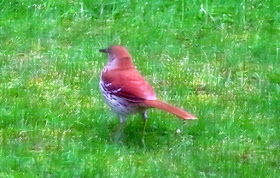 I knew it was a thrasher, but the photos were not at all crisp and the color was distorted and much too red. I figured the side view, showing the bird’s distinctive shape and color pattern, would not be too hard for Merlin to work out, and sure enough, Brown Thrasher was the first choice it gave. I figured the other view, showing just the bird’s back and flanks but little of its face and none of its breast, would be trickier for Merlin, but Brown Thrasher was the first choice for that one as well. 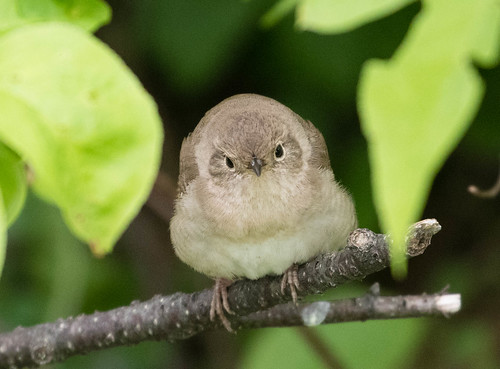 I then tested it on a front view of a House Wren, leaving out the distinctive wren features of the wings and tail, and it gave that as the first choice.

Merlin also got a fluffed out baby Red-breasted Nuthatch right, even though this, too, didn't show the species’ distinctive shape—and when I zoomed in for Merlin, I even cropped out the tail.

I went through dozens of my photos of birds from Minnesota and Merlin got them all correct as the first choice for each. It did get stumped on one nice, clear photo sent to me today by someone who'd found these birds running about by his cabin on Rainy Lake. 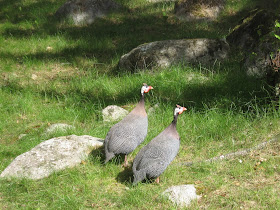 Apparently one of his neighbors is raising Helmeted Guineafowl as free-range fowl. Of course, we could hardly expect any software to properly identify a domesticated African bird in the wilds of Minnesota. 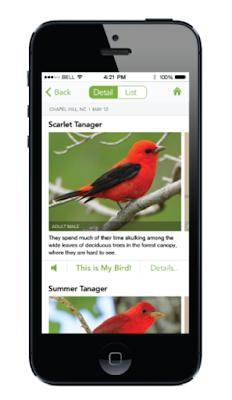 Merlin has a button, “This is my bird!” that we click if we are certain it properly identified the photo—that’s one way crowdsourcing has improved the app’s accuracy, but the millions of checklists sent in to Cornell via eBird are a powerful source of current local information, too. If we’re uncertain even after seeing the choices Merlin presents, we can also go through the questions Merlin gives to identify a bird without a photo: Where did you see the bird? When did you see the bird? What size was the bird? (It gives four options—a tiny songbird, a robin, a crow, and a goose, offering the option of choosing in-between sizes as well.) What were the main colors? (It allows you to select from one to three choices among nine colors.) And was the bird…? (the choices are eating at a feeder, swimming or wading, on the ground, in trees or bushes, on a fence or wire, and soaring or flying). 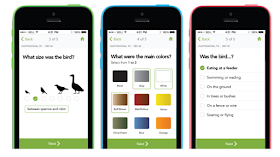 Then it creates a list of possible birds, with several photos each, that it could be. Depending on the details, that list could have more than 20 choices, or just one or two, but the photos of each help you choose. The most probable is the first choice given. 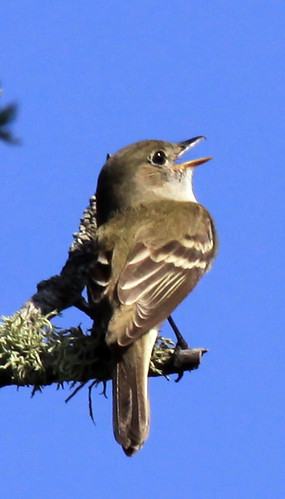 Some species are too close in plumage for even an expert to be certain with just a visual representation. I put in a photo of what I knew was an Alder Flycatcher, and Merlin made that the first choice—impressive enough, but it gave the right alternate choices, Least and Willow Flycatchers, noted that Willow Flycatcher would be rare here, and said for the real bird, Alder Flycatcher, that it’s extremely similar to the other species and gave habitat and voice hints, along with actual recordings. A beginner who really didn’t know what it was would be able to verify its identification with these tools. 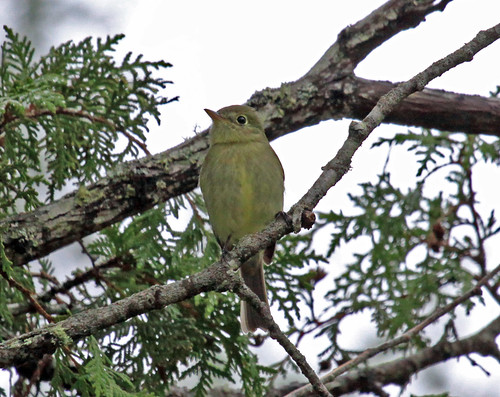 When I gave Merlin a photo of a Yellow-bellied Flycatcher, a very similar species in the same genus, it gave that as the first choice with Alder as the second, again providing help with habitat details and recordings to verify the identification.

So Merlin is a shockingly cool app. I feel a special connection to it because many of my own photos are in Merlin’s database. And Merlin is absolutely free, for android or iPhone. Just put “Merlin bird identification” in your browser’s search box, or click here, to find it.