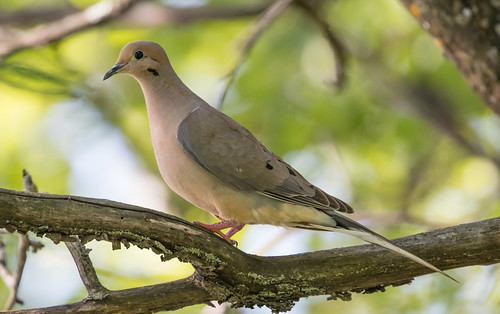 As I’ve been looking at the history of America’s environmental protections, I’ve been more and more concerned and depressed about how issues that were once bipartisan have split along the same right-and-left lines as so many other issues in our horribly divided nation. There have always been politicians willing to look aside and ignore even the most toxic discharges, the most dangerous pesticides, and the most egregious “taking” of critically endangered species where protecting them might cut into corporate profits. But most politicians of both parties were once willing to stand up for clean air and water and protection of our other natural resources. What happened?

One case that illustrates the evolution of this chasm was when the Minnesota DNR designated the Mourning Dove a game bird a decade ago. Before some acrimonious hearings, all the hunters I talked to seemed perfectly happy with the idea of keeping doves a non-game species, either statewide or in the northern, forested part of the state.

I’m not sure what forces started the sea change in game bird designations right then, starting with naming the crow a game bird, then the dove, and then the Sandhill Crane. The movement was national or regional rather than state-driven because the exact same thing happened at the exact same time in Ohio, Michigan, and Wisconsin. Michigan was the one state that thwarted the effort to make the Mourning Dove a game bird, because the State of Michigan had long before passed a law designating the Mourning Dove the state’s official “Bird of Peace.” Some of the language of that law gave the dove special legal protections.

Here in Minnesota, I requested the DNR to restrict the dove season in the northeastern corner of the state where American Kestrel migration is concentrated. It's easy to mistake flying Killdeer and American Kestrels for doves, and kestrels perched on wires for doves, too. Even in states like Texas, with a long-standing dove-hunting culture, hunters occasionally mistake birds of other species for doves. It didn’t seem worth the risk to the already-declining kestrel, especially because the dove population up here is very small.

I also asked to limit the dove hunt to non-toxic shot. I’ve done a Mourning Dove survey for the US Fish and Wildlife Service and the US Geological Survey since 1988, and every year the surveyors receive a copy of the annual Mourning Dove report that includes summaries of lots of scientific research about doves as well as population trends based on the surveys. According to these papers, one of the significant causes of mortality for doves is ingesting lead pellets as grit. It seemed like a no-brainer to prevent more toxic pellets from raining down on the landscape.

At the hearing, I acknowledged that the Mourning Dove is the most heavily hunted bird in North America, and that despite its presence at backyard feeders, it’s still a federally designated game bird that generations of conscientious, conservation-minded, honorable hunters have hunted.

I was the only one addressing the issues of protecting migrating kestrels and lead shot, but otherwise didn’t take too much issue with the idea of a dove hunt except to acknowledge concern about the precedent the DNR was setting in changing the designation of such a popular non-game backyard bird to a game species, after soliciting funds for decades for the Non-Game Wildlife Program via the "chickadee checkoff," the DNR's own name for a program that entices people to contribute to help their backyard birds. Changing the dove's status seemed a disturbing precedent, and sure enough, in 2010, the DNR designated the Sandhill Crane a game bird; ironically and disturbingly, seven years later they are still using the Sandhill Crane as their poster child on their "Nongame Wildlife—Northwest Region" webpage. That cynical bait-and-switch was why I stopped contributing to the Nongame Wildlife Program for several years, and I still find it distressing.


Unfortunately, most of the people speaking out against the proposal didn’t focus on expectations of people contributing to the Nongame Wildlife Program, or on specific and nuanced issues like lead shot or mistaking doves for kestrels. Based on the testimony I heard, by the Humane Society and several individuals, most of the people testifying against the proposal were against hunting and hunters absolutely. Some spoke so offensively about hunters that even I—a non-hunter my entire life—was offended.

And as a result, the hunters I knew and respected from up here whose personal inclinations had been neutral or against the dove season couldn’t help but join forces with their fellow hunters under the onslaught. And the DNR spokesmen I talked to entirely pooh-poohed my suggestions about lead and about limiting the hunt during hawk migration along the migration corridor.

Today, a decade later, inflexible people at the extreme ends of every issue are the ones driving virtually every issue. The people away from the extremes are no longer able to work out reasonable and effective compromises—and compromise is essential for any democracy to survive. I don’t know how we change this, but we sure better start working on it before it's too late for all of us.