Cassia Crossbills: a tale of pinecones and squirrels

One of my favorite mammals, the Red Squirrel, is adorable and spunky. It’s also a serious problem for nesting birds—these cute little guys feed on an inordinate number of eggs and nestlings every spring and summer, which provides them with the protein they need to produce and nourish their own young. For the most part, native birds have adapted to this native predator, as they do to other natural competitors and predators. 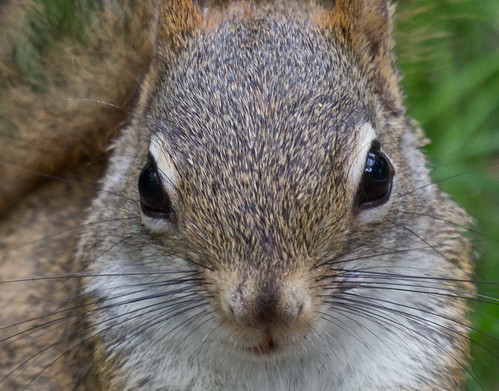 Unfortunately, when it comes to introducing any new species to an area, people tend to leap before they look. On Newfoundland, back in the 60s, after pine martens had been depleted by over-trapping for their fur, tunnel vision wildlife managers brought in red squirrels. They figured the squirrels would have plenty of food—throughout the year, whenever conifers are producing cones, the squirrels eat seeds.

Sure enough, the squirrels had plenty to eat on Newfoundland. Unfortunately, martens tend to hunt at night, and mainly on the ground, so they couldn’t capitalize on the squirrels, which quickly became overpopulated.

When red squirrels feed on conifer seeds, they chew the cone off at the base first. Little by little, trees evolve to defend against squirrels, making the cone base thicker and the cone itself smaller, each one containing fewer seeds.

But the conifers on Newfoundland, which had much larger, sturdier cones than those found elsewhere in the east, had apparently co-evolved with one unique, fairly sedentary population of the Red Crossbill in a curious arms race. The conifers needed as many of their seeds to germinate and grow into new trees as possible, but the crossbills needed to extract and eat seeds regularly. As the conifers grew larger, sturdier cones to protect them from the crossbills, the birds grew larger, sturdier beaks. Scientists had been trying to figure out why the Newfoundland crossbills were so different in size and migratory habits from other Red Crossbills in the east, but long before one ornithologist started teasing out the truth, the sudden overpopulation of Red Squirrels after their introduction in 1963 left the crossbills without enough food in the one place where they’d evolved to exploit their food source without competition.

I just read a fascinating article by Nick Neely in the High Country News about Craig Benkman and how his work on another crossbill population was what led the American Ornithological Society to make a big change in crossbill taxonomy.

Benkman was the one who worked out a tight relationship between Red Crossbill body- and beak-size and each population’s preferred cone. He arrived on Newfoundland in 1988, after those crossbills had pretty much died out—that’s when he realized it could well have been that the introduced squirrels that had out-competed the crossbills. In 1993, he found a similar area in Canada—the Cypress Hills of Saskatchewan—that had extraordinarily large lodgepole pinecones and had once had another large, sedentary crossbill, but again he was too late: red squirrels had been introduced there, and the unique local population of crossbills had vanished.

Then in 1996, Benkman found that in the South Hills of Idaho, where lodgepole pines bore oversized cones, there was a crossbill with a huge bill, and no squirrels. He’s been working for years on establishing that this sedentary population is a separate species from Red Crossbills, and now he and his students furnished enough DNA information to satisfy the American Ornithological Society—just this month, the Cassia Crossbill, named for the Idaho county where it’s found, was officially split as a separate speciesand given the cool scientific name Loxia sinesciurus, which means literally "crossbill without squirrels."

Unfortunately, squirrels are the least of the problems facing crossbills in 2017. Climate change is causing even bigger changes to cone seed availability. Since 1980, crossbill numbers in general have been declining about 2 ½ percent every year, and Cassia Crossbills have had a couple of wild population drops. Their unique bill makes them wonderfully suited for the lodgepole pines in the South Hills, but these pine cones open and shed their seeds when temperatures get too warm. A series of 90-degree days could result in one-fifth fewer seeds for crossbills over the following four years.

The Cassia Crossbill is eligible for protection under the Endangered Species Act, if the U.S. Fish and Wildlife Service under current management doesn’t fight it. But because of climate change, the lodgepole is forecast to disappear from southern Idaho by 2080 no matter what. The one bird specifically evolved to feed on it will disappear along with it.

So what evolution gave the world over millennia will be destroyed in a matter of decades. But thanks to Craig Benkman's seminal research, we'll at least know what it is that we trampled to death under our massive carbon footprint.