The Captain of Our Soul 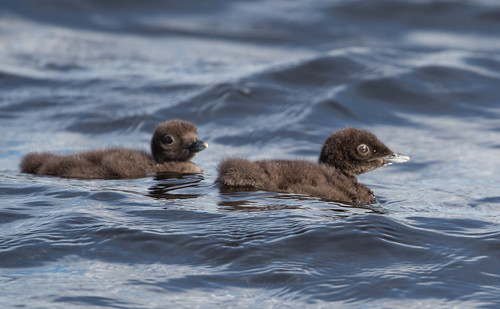 This weekend, I visited my friends David and Suzy Foster in northern Wisconsin near Boulder Lake, and they took my dog Pip and me out on their pontoon boat. We spent a few moments watching the resident loon family, and I snapped a few photos. 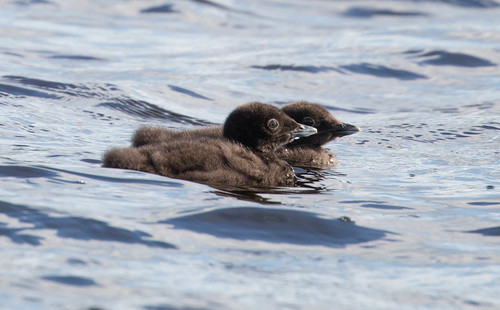 From an appropriate distance, baby loons seem so vulnerable and tiny near their parents, but a good telephoto lens shows us their eyes, and it always strikes me just how clueless yet self-contained they look. Every moment of their young lives, baby loons are learning, but sometimes what they’re learning is a harsh final lesson in just what those big yellow eagle talons are capable of, or why they should have darted away from that big round snapping turtle swimming toward them below the surface, or why it’s important to stay away from boat motors.

It was already July 8, but these two babies were still quite tiny—bad storms and the area Bald Eagles had set their parents’ nesting efforts back twice. If these chicks survive the next two months, their parents will fly to another lake, leaving them in hopes that the lake’s fish supplies will last until the chicks’ flight feathers have grown in entirely and they can take off before ice closes them in.

Parent birds put so much of their hearts and souls into raising young, despite the fact that so many things can and do go wrong. We humans share that with birds. We all like to feel like we are the masters of our fate, and we all rage over the dying of the light—at least of our own light and the light of our young. Bald Eagles that extinguish the light of so many baby loons do it to keep the light burning in their own babies’ eyes. Whether we’re an eagle, a loon, or a human being, we each try to preserve that flame of our essential being through our final breath.

The first time I ever watched a bird get banded—a LeConte’s Sparrow at Whitefish Point, Michigan, in 1976—I marveled at the look of defiance in that tiny bird’s eyes in the bander’s huge hand. A 180-pound man weighs 5,832 times as much as a 14-gram LeConte’s Sparrow, but that bird looked every bit as defiant as Ahab standing up to the great white whale Moby Dick himself. Fortunately, the banding episode ended better for both bird and man than Moby Dick ended for Ahab, his crew, or the harpooned whale.

When I rehabbed birds, I saw firsthand how much more defiant than fearful they seemed—bloody but unbowed as long as the light burned in their eyes. I like to read William Ernest Henley’s 1888 poem, Invictus, imagining it was written by a loon, or an eagle, or a LeConte's Sparrow:


Out of the night that covers me,
Black as the pit from pole to pole,
I thank whatever gods may be
For my unconquerable soul.

In the fell clutch of circumstance
I have not winced nor cried aloud.
Under the bludgeonings of chance
My head is bloody, but unbowed.

Beyond this place of wrath and tears
Looms but the Horror of the shade,
And yet the menace of the years
Finds and shall find me unafraid.

It matters not how strait the gate,
How charged with punishments the scroll,
I am the master of my fate,
I am the captain of my soul.


All of us, be we human, eagle, sparrow, great white whale, or baby loon—all of us live in an unpredictable and often dark universe. We may all of us try to be the master of our fate. But no matter what fate hands us, we can, each of us, stand unconquered— the captain of our soul. 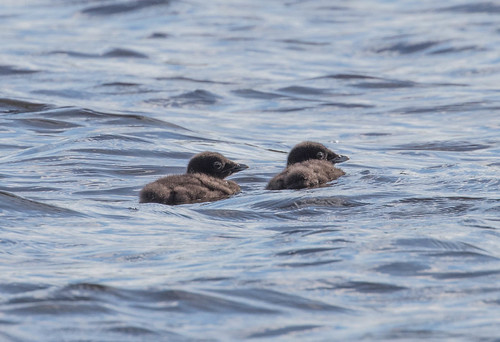